It’s time to be real honest with yourselves! What is the first thing that springs to mind when you think about Amsterdam? Depending on your age, perhaps you will say Anne Frank or the stereotypical canals and bicycles that are literally everywhere in the city. But I am sure there are a few of you out there that would think about the Red Light district or the freedom of cannabis throughout the city. Regardless of your stance on any of these issues, the reality is that Amsterdam exudes freedom and we were excited to visit the Dutch capital to learn more. What better way to do this than by an Amsterdam walking tour!

Amsterdam is a beautiful city and it didn’t take us long to fall in love with the perfectly dubbed ‘Venice of the North’. After arriving late at night and experiencing first hand the awesome FREE ferry service that takes locals and visitors alike to various parts of the city, we headed back to the central part of Amsterdam to take another of Sandemans free walking tours.

The previous day we experienced the Brussels walking tour which was an excellent way to take in the main attractions, along with a few hidden gems that our tour guide introduced to us. We were excited and prepared to go along with the Amsterdam version as we now considered ourselves to be seasoned pros of the free walking tour.

From the wild history of prostitution and drug decriminalization, to the tragedy of Anne Frank’s story and Nazi occupation, we aim to give you a perfect introduction to Amsterdam.

Having read the above quote on Sandemans website prior to taking the tour, this was going to be…as the title of this post goes…an epic yet potentially controversial walking tour. But we all love a bit of controversy right? Arriving at the National Monument at Dam Square meeting point just before 10:00AM, we met a variety of visitors from all corners of the world.

We were introduced to our tour guide for the day, Katjalisa who immediately asked us if we were all ready to stick with her for the full 2.5 hours despite the cold weather and potential for heavy rain. A little inclement weather wasn’t going to stop any of us from experiencing the city of Amsterdam!

***PLEASE NOTE, PICTURES WERE NOT ALLOWED IN THIS PART OF THE CITY AS ADVISED BY OUR TOUR GUIDE***

If any members of the tour were thinking that this was going to be all about history and modern art in Amsterdam, they quickly realized this was far from the truth as we immediately headed for one of the most controversial neighborhoods of the city – the Red Light District. Visiting this part of the city during the morning is clearly a very different experience than at night, with very few people on the streets and the windows/buildings all covered up.

Walking through the district, Katjalisa began explaining that she is actually working on a research project ‘behind the scenes’ of the Red Light District. I am sure certain members of the group were a little uncomfortable as our tour guide shared more information on ‘costs’ and ‘expectations’ of individuals visiting this neighborhood, but the reality is this is what takes place here and it is an accepted industry. Katjalisa emphasized that the females participating in prostitution here are some of the most confident individuals she has met, it is a very different industry to the stereotype that most cities associate with this.

How does the government, city of Amsterdam and locals feel about this? Just like we later discovered with the topic of cannabis and ‘coffee shops’, it is a topic that is rarely discussed. However, it is clearly apparent that the type of tourists and visitors to the city are for the most part not what Amsterdam would like to attract.

As we stood in the Oude Kerk square listening to Katjalisa’s stories, a group of ‘typical’ juveniles strolled through the district, and she immediately frowned indicating that this is exactly the type of people that are frequently seen here and unfortunately, it has a negative reflection on the city. We also noticed a small, bronze statue of a woman representing a prostitute waiting at the door for a potential client. You can see how proud she looks and this is a perfect representation of all the prostitutes in this part of the city.

We also noticed a small, bronze statue of a woman representing a prostitute waiting at the door for a potential client. You can see how proud she looks and this is a perfect representation of all the prostitutes in this part of the city.

I mentioned the Oude Kerk square, well after listening to the controversial stories related to the Red Light district, we then switched to the historic church that towers above this district. It’s kind of ironic that this church is located here but it’s believed that throughout history, devout protestants would have enjoyed the Red Light district the previous night before crawling into the church to beg for forgiveness after their sins!

Venice of the North

The Red Light District may be the most famous neighborhood throughout Amsterdam, but for those of you less interested in hearing about that perhaps you will be more interested in what I now believe to be the best stereotype of the Dutch capital.

The canals that run through the city reinforce the similarity with a fellow European city, but it’s also intriguing to see how this city is pretty much revolved around bicycles.

The Jordaan District is a perfect example of a Dutch neighborhood in Amsterdam as it was initially created by the working class and immigrants moving into the city. Today, Amsterdam is one of the most multi-culturally diverse cities with migrants from a myriad of nations finding residence here.

Having experienced all of the bicycles in Copenhagen, I never imagined we would visit a city with more two-wheeled forms of transportation.

But Amsterdam has a network designed for bicycles that make this by far the best way to get around. In fact, as you walk around the city it’s apparent that bicycles are the norm rather than cars!

We took a short break before continuing our tour and this gave us an opportunity to experience some of Amsterdam’s fine cuisine.

Our tour of Amsterdam continued through courtyards, cobblestone alleys and of course by the iconic canals. Katjalisa pointed out a few of Amsterdam’s most iconic ‘coffee shops’ including Dampkring Amsterdam, most famous for being the location in the movie Ocean’s 12 with Brad Pitt and George Clooney.

Locals suggest this is not one of the better coffee shops around, so if you are interested in sampling some of Amsterdam’s finest cannabis, perhaps you need to ask a local for their recommendation!

The topic of cannabis is again another ‘controversial’ matter and one that Katjalisa was a little hesitant to discuss, primarily because this is another tour offered by Sandemans.

By the way, if you haven’t already figured it out…the term ‘coffee shop’ in Amsterdam refers to a spot where you can grab a menu with all varieties of cannabis/joints etc. available for purchase!

Where does all the cannabis come from? Well, that’s the million dollar question that in reality no one knows. Is it legal? Technically no, rather it is ‘tolerated’ by the government. Our guide indicated that if the police caught you with a beer and a joint, they would ask you to get rid of the beer but say nothing about the cannabis. An individual may carry a maximum of 5 grams of cannabis without risk of prosecution.

If you are looking for a spot around Amsterdam to head away from the hustle and bustle of city life, in particular, those bicycles that are difficult to avoid unless you are a local, head over to the Begijnhof Convent which is an enclosed courtyard dating back to the 14th century.

It’s crazy to think that over the last 600 years, this location has maintained such a quiet ambiance and sanctuary feel yet everything surrounding it has developed into the modern city.

Today, people are still living inside the Begijnhof so visitors are encouraged to maintain the silence and pay respects to the gorgeous architecture that is preserved throughout this courtyard. The well-maintained garden is a central focal point alongside the English Reformed church which still maintains the original medieval tower dating back to the 15th century.

Walking around Amsterdam, you can’t help but notice all of the quirky architecture. For example, during our tour, we noticed both the widest bridge and narrowest house.

Let me tell you, I can’t imagine moving much furniture around in the narrow house! Regardless of whether this is ‘officially’ the narrowest house in Amsterdam, it is a little over 2 meters wide proving that it’s not that much wider than the actual doorway.

The Torensluis Bridge is the widest bridge in the city and was initially constructed in the 17th century. It was originally constructed to serve as a prison and today the barred windows under the bridge serve as a reminder of the original purpose.

The iconic figure of Multatuli is also present here through a statue that depicts this author who was most famous for his satirical novel, Max Havelaar.

Our tour of Amsterdam culminated at probably the most iconic of all attractions, the Anne Frank House. Have you read the ‘Diary of Anne Frank’? I have to admit that none of the tour group members had but by all accounts it’s definitely a worthwhile read.

Although our tour didn’t actually go inside of this building, the story of our Frank and her family lived in the annex here along with her father’s business. As Anne Frank was a Jewish victim of the Holocaust, she was kept in hiding in this location for quite some time. She used the time spent here to write her diary and portray her feelings and experiences throughout these difficult times.

Her secret location unfortunately didn’t last too long, as on August 4, 1944 she was captured by the Gestapo and taken to the Auschwitz Concentration Camp. She died there just a few months later in early 1945.

Today, the popularity of this attraction makes the waiting times quite lengthy but according to Katjalisa it’s well worth the wait. Quotations and artifacts from the infamous diary can be seen in the museum, and although we didn’t have time on this trip to head inside, we look forward to a return trip in the near future. Not that we need any excuses to return to Amsterdam!

Amsterdam is clearly an ‘epic and controversial’ city, but surely that’s the reason why it attracts so many visitors from all corners of the globe every year! Our Amsterdam walking tour was a real eye-opener but thanks to Katjalisa, she not only educated us in a number of ‘touchy’ topics but she introduced us to a city that oozes real character and uniqueness.

If you plan on visiting Amsterdam, I would strongly encourage you to consider taking a guided walking tour. You will appreciate the knowledgeable guides and leave with a wealth of knowledge about the destination we can now all associate as the ‘Venice of the North’! 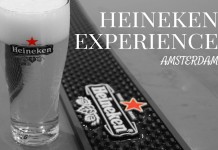 Why the Heineken Brewery Tour Is an Amazing Experience?