Having traveled to St. Louis several times before, I am beyond excited to have traveled this time with Heather to find those hidden gems in the city of Cardinal pride. Cardinal baseball is iconic in the south and I have supported them since I was a little girl watching Mark McGuire break records. The downtown area is equipped with many historical landmarks and attractions for your added entertainment, but it is “St Louis off the beaten path” that we explored during our recent trip.

After reading this post, hopefully, this will entice you to visit St. Louis, Missouri to explore these hidden gems and experience the fine attractions and delicious cuisine options around ‘The Gateway to the West’. We strongly encourage you to book a hotel in the St. Louis area and take some time to explore everything there is to see off the beaten path.

The first stop we made on our trip after arriving in St. Louis was in a small neighborhood known as The Hill, which is located just south of Forest Park and interestingly got its name as it’s known to be the highest point in the city. The Hill is primarily an Italian American neighborhood and boasts in it’s Italian cuisine with an assortment of authentic Italian restaurants and bakeries.

The best way to experience The Hill is by foot – that way you can see for yourself how tight-knit this neighborhood really is.

Next up on our road trip was exploring The Loop, a suburb of University City that gets its name from a streetcar turnaround that was located in the area over a century ago. Now, the Loop displays some of the most contemporary establishments in and around St. Louis.

With so much to offer, The Loop will not disappoint. The Loop offers a vast array of attractions such as restaurants, music clubs, coffee shops, and boutiques.

We then decided to drive around and see what else we could find and in that, we found a couple of new neighborhoods and parks to explore – Benton Park and Tower Grove Park.

Benton Park, St. Louis’ second oldest park, is in a small neighborhood, also called Benton Park. Located south of the main downtown area of St. Louis, Benton Park has a small lake and a couple of rustic bridges made out of cast-iron, a perfect representation of its early history.

Tower Grove Park is located adjacent to the Missouri Botanical Gardens. This gem is hidden in plain sight, offering well shaded paved paths, tons of pavilions for a variety of different events, and not to mention spectacular landscaping.

Before leaving The Loop, we had to make a pit-stop at Fitz’s Bottling Company. Not only is Fitz’s a restaurant, it’s also a microbrewery with many flagship flavors such as the iconic Cardinal Cream. Along with their full range of sodas to choose from, Fitz’s also offers classic American-style cuisine as well as various shakes, malts, and not to mention floats.

While taste testing their sodas, we were able to watch as they were being bottled right in front of us, which I must say was an unforgettable experience.

While exploring the Benton Park area, we discovered Gus’ Pretzels, which is a local third-generation pretzel shop situated in the shadow of the Anheuser-Busch Brewery and right next door to the Soulard area. Gus’ Pretzels offers a one-of-a-kind experience as you get to watch the whole production process take place.

If you love pretzels, then I’m confident that you’ll love Gus’. Gus’ not only offers pretzels, but they also have hotdogs and a variety of different sandwiches as well.

Next up is Imo’s Pizza, which you can only find in and around the St. Louis area. Imo’s is notorious for their “original St. Louis-style pizza,” which comprises of a thin crust and the use of Provel cheese – a combination of cheddar, Swiss, and provolone. I am not sure if the picture does this justice but this pizza was AMAZING!

Imo’s not only has outstanding pizza, they have pastas, salads, and sandwiches as well, so plenty of choice for everyone regardless of your tastebuds.

Imo’s has definitely made me a fan of their St. Louis-style pizza and I plan on making that a routine stop when returning to St. Louis in the future.

After Imo’s, we decided to try out for ourselves a local frozen custard place that everyone had been raving about. Ted Drewes is located on Chippewa St. on historic Route 66 and when we got there, I was a little reluctant due to the amount of people in line. However, we were determined to try it and knew we were in for a real treat.

I can’t even begin to describe the amount of people that were waiting in line to order. Luckily, there were twelve different windows open, so it didn’t take long to get through. They have such a large selection of options plus an assortment of different toppings to choose from that it can get a bit overwhelming, but once you find the right combination, I’m sure you won’t be disappointed.

Ted Drewes is definitely a must-stop when you’re in St. Louis – you really can’t make a trip to the city without a visit to the best frozen custard around!

Other Finds Along the Way

While exploring The Hill, we knew we had to stop at a local chocolate factory when we heard that they were giving free tours. And no, you don’t have to have one of those golden tickets to get a peek inside. Chocolate, Chocolate, Chocolate Company (say that three times fast) went beyond our expectations.

Of course, we were concerned with the intricate details of how their chocolate was made, but what we didn’t realize was that in order to make their product unique, they needed a balance of all natural ingredients and artisan chocolatiers to enhance customer satisfaction. This is what makes Chocolate, Chocolate, Chocolate Company different than many renowned chocolate factories today.

Before heading home, we decided to swing by Forest Park and make a stop at the St. Louis Zoo. Forest Park is one of the largest parks in the United States and is approximately 500 acres larger than Central Park in New York City.

Forest Park is without a doubt a gem that you won’t find anywhere else and always has tons of things to do and events going on all year round – whether it’s sledding down Art Hill during the winter or renting a paddle boat during the summer.

Of course, we couldn’t pass up going to the St. Louis Zoo, which is known to be one of the top zoos in the country. The St. Louis Zoo offers free admission and also offers some additional attractions at a small fee.

There are a wide variety of animals that range from giraffes and lions to monkeys and penguins – with penguins being both mine and Heather’s favorite.

If you’re in St. Louis, it really is a must that you stop by Forest Park and check out all the different attractions and events going on.

If you have never been to St. Louis before, you really are missing out on a great adventure. Not only should you visit some of the top attractions such as the Gateway Arch, Grant’s Farm, and Anheuser-Busch Brewery, you should also check out some of the hidden gems that we embarked upon.

On the other hand, if you have been to St. Louis before and have never had a chance to explore the city, I highly recommend checking out the above and even do some exploring of your own – you never know what you’ll find. I am delighted to have been able to discover many different hidden gems in the city and I hope that if you pay a visit, you will also take the opportunity to scout out some of these unheralded spots because you will certainly not be disappointed!

This post was written by Mallorie Deaton after we visited St. Louis, Missouri on a recent weekend trip together. Mallorie is a fellow Arkansan and we had an amazing time experiencing all of the hidden gems around St. Louis. Thanks Mallorie for putting together a great post highlighting our experiences together! 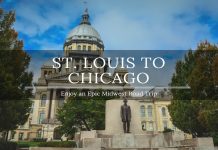 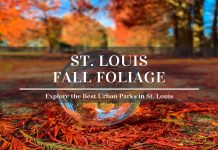 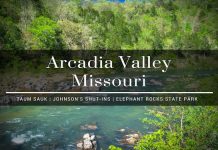 Arcadia Valley – Is the Top of Missouri Worth Exploring?