Forget Graceland, Elvis and Rock and Roll because Memphis has so much more to offer than you might imagine. After crossing the Mississippi River bridge that connects Tennessee with Arkansas, there is a myriad of opportunities available to explore a hidden part of Memphis – the banks of the downtown Memphis riverfront! The Tennessee Welcome Center is located along the banks of the river, but beyond this there are some really cool photography shots to be had.

Take a walk with us as we explore the banks of the Mississippi along the riverfront and perhaps this will inspire you to check out a part of the city that is more than just a location for “Memphis in May”!

Frequently referred to by local Memphians as the ‘New Bridge’, the Hernando de Soto Bridge is a gorgeous piece of architecture and a photographer’s dream that connects Tennessee with Arkansas. From the banks of the Mississippi you can really capture some nice shots of the bridge with the river and surrounding landscape providing a perfect backdrop to this impressive architectural design.

Memphis is home to many iconic locations and also the infamous ‘Memphis in May’ festival that attracts a variety of world-renowned artists/musicians from around the globe. Many of these performances are held in the amphitheater on Mud Island which despite it’s name is an attractive location along the banks of the Mississippi.

Mud Island can be accessed either by car if you are willing to take a scenic detour around the Pyramid, or by foot using the monorail that takes visitors across the Mississippi to the landing port on the island.

As I mentioned, Memphis famous for many reasons but added to this list has to be the last authentic cobblestone landing that is still usable in the United States. A variety of scenic cruises depart from this very landing and as you stroll along the uneven surface, you can see a number of remnants dating back to the early 19th century.

The cobblestone landing wouldn’t be the same without a number of riverboats that crawl along the Mississippi in front of the Memphis skyline. Over the years there have been a number of iconic riverboats that took to the water here, but nowadays we are left with the stereotypical Memphis Queen – an apt name for a darling of a vessel in my humble opinion!

A 90 minute sightseeing cruise may be the most popular but there are a variety of other options available to explore the “Mighty Mississippi”.

Standing near the Hernando de Soto bridge and peering down the banks of the Mississippi, you can see the impressive structure of the ‘old’ bridge, also known as the Memphis-Arkansas Bridge. The cantilever design of this bridge was finalized in 1949 and architecturally provides an iconic landmark along this stretch of river.

We found a really good spot close to the bridge to capture some pictures, though with the overcast conditions it made it difficult to pick out the intricate details of this design. The best spot to capture pictures of this bridge is from Martyrs Park which also gives you a pretty good view of the ‘new bridge’ along with the small yet scenic Memphis downtown skyline.

Take a walk along the banks heading back towards the new bridge and you will stumble across another piece of history – Fort Assumption!

A Tale of Two Bridges

As I look back on our experience walking along this stretch of the Mississippi river banks, Heather gave me the inspiration for the title of this post because she suggested “A Tale of Two Bridges” would be a perfect summary. From the Hernando de Soto bridge to the Memphis-Arkansas bridge, there are a myriad of reasons to explore here.

Thinking about the story by Charles Dickens, “A Tale of Two Cities”, there is a really interesting quote that I think applies so perfectly to Memphis and is represented throughout this part of the city.

I see a beautiful city and a brilliant people rising from this abyss, and, in their struggles to be truly free, in their triumphs and defeats, through long years to come, I see the evil of this time and of the previous time of which this is the natural birth, gradually making expiation for itself and wearing out. . . .

The stereotypes that surround much of Memphis are probably not the most positive but walking along the downtown riverfront and seeing how the locals have ‘risen from this abyss’, emphasizes how this city has come together and achieved a plethora of positive results on society.

Taking the time while you are in the city of rock and roll to stroll along the downtown riverfront is certainly a worthwhile experience. Perhaps taking a walk around the downtown area to explore street art is not for you, but don’t worry this city has a whole bunch of intriguing attractions to experience.

Architectural design of bridges is always something that has intrigued me, so seeing the amazing construction of the two that cross the Mississippi is worth visiting alone. However, a visit to this part of Memphis wouldn’t be the same without experiencing the famous riverboats that can take you on an early afternoon meander along the river itself.

Considering the rich history in the world of music, it’s inevitable that Memphis will attract visitors from around the globe. The world famous Beale Street may be a hub for nightlife with the famous B.B. King’s and other bars, but I encourage you to take a walk further down the street until you reach the banks of the Mississippi and perhaps you will encounter as much of an enjoyable experience as we did! 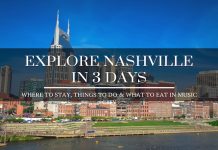 3 Day Nashville Itinerary – Explore the Best Things to Do 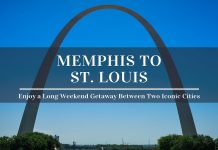 Memphis to St Louis – How to Enjoy a Long Weekend Getaway 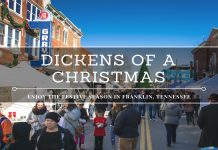 Dickens of a Christmas – Enjoy the Best Holiday Event in Franklin