If you love football, it’s a no-brainer that you will be familiar with one of the most iconic stadiums in the world – Old Trafford. If you have any plans to visit the city of Manchester, you would be crazy to not consider taking an Old Trafford stadium tour. Home of one of the world’s biggest sports teams by the name of Manchester United, Old Trafford is not only a location famous for the plethora of footballing talent that has graced this field but also because of the rich history that surrounds this football club.

Take a moment to contemplate all of the legends that have set foot on this playing surface. Sir Bobby Charlton, Dennis Law, George Best, Ryan Giggs, Cristiano Ronaldo and Wayne Rooney to name just a few (I’m sure there will be some MUFC and football fans around the world that will argue these names that I have thrown out!) are some of these key figures that have walked through the tunnel onto this hallowed turf. 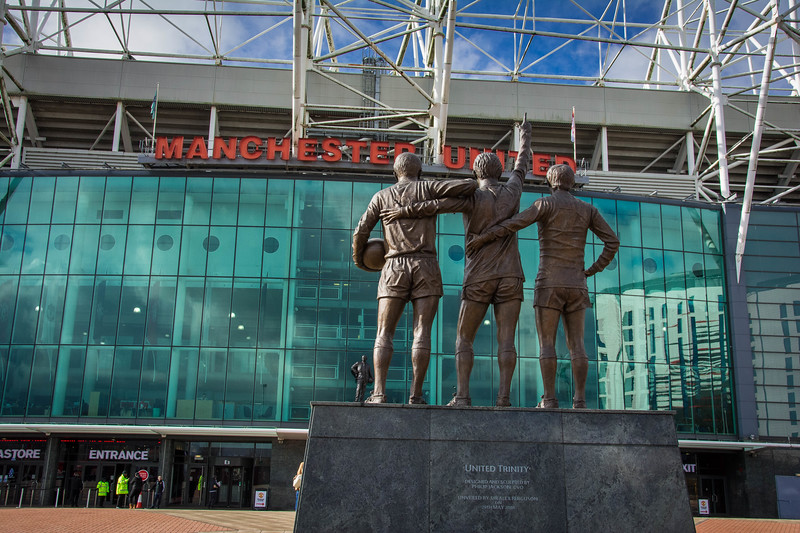 When we headed back to England on our recent week visit to spend time with family, we decided now was the time to experience the awesome Old Trafford stadium tour. Let’s take a look at exactly what you will see and why you will be raring to add this to your itinerary, even if you are not a Red Devil fan! 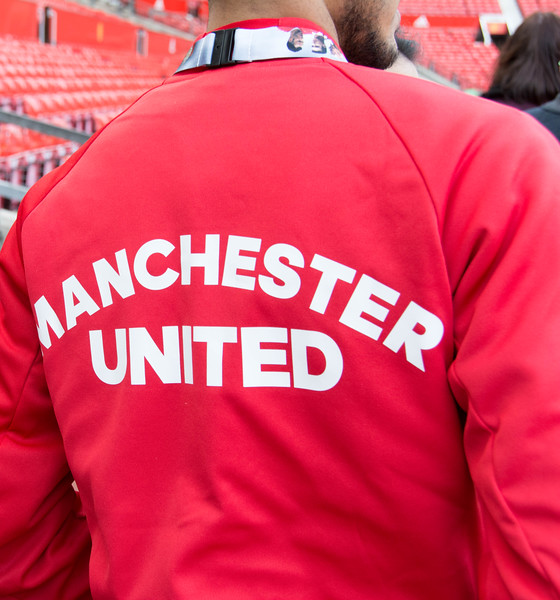 Old Trafford is located in the heart of Greater Manchester, just a short distance from the Salford Quays and in the suburb of Stretford. A visit to Old Trafford on a non-match day is certainly going to be much easier than dealing with the 75,000+ fans that can be found at most home matches.

Parking is convenient if you are just visiting for a stadium tour but again, if you are heading here on a match day, I would strongly consider taking public transportation as parking can be a headache.

Tickets for the stadium tour will also provide access to the Old Trafford Museum which is a great spectacle for learning more about the history and prestige of Manchester United.

The stadium tours last approximately 80 minutes and are lead by expert guides who are familiar with the history of Old Trafford.

There are a number of other tour packages available at Old Trafford, including an opportunity to take a cruise around the Salford Quays or an ultimate “Old Trafford Experience” where you can wine and dine inside the Red Cafe, located directly next to the museum.

Be sure to check out Manchester United’s official website for more information on these packages along with the latest prices and admission hours.

The history of Old Trafford dates back to the start of the 20th century when construction started in 1909 and the original stadium was opened in 1910. If you choose to embark on an Old Trafford stadium tour, you will be lead around some of the most historic landmarks while visiting Old Trafford alone will take you along some of the iconic streets surrounding the stadium that have been named after some of Manchester United’s greatest stars.

Sir. Matt Busby Way is the main street that Old Trafford is located on but recently Sir. Alex Ferguson had both a stand inside the stadium and also a street named after his successful tenure at the helm of Manchester United.

Simply walking around the grounds at Old Trafford makes you have goosebumps on your back as you realize just historic this stadium is in the world of football.

As we strolled around the outside, we caught a glimpse of two of the most iconic memorials in world football. Again, Sir. Matt Busby can be seen by the Manchester United Megastore as he peers down at all of the fans that walk around the stadium before entering. 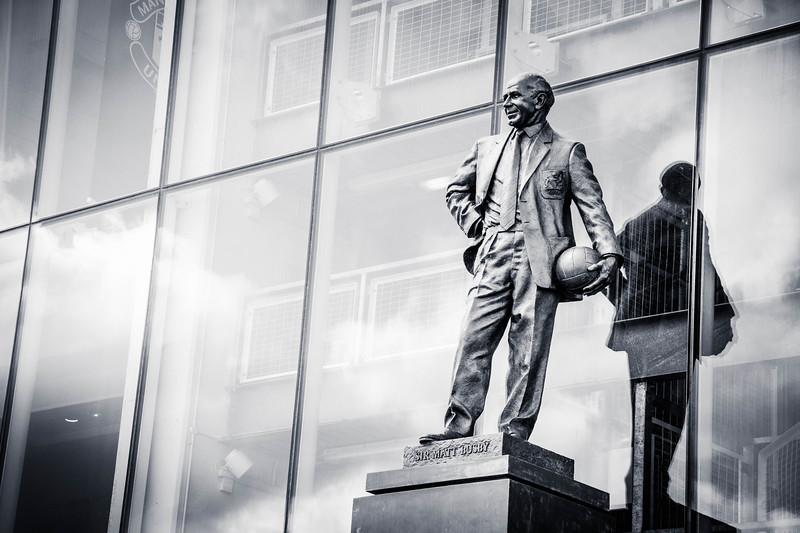 In front of this statue is another tribute, this time to the club’s “holy trinity” comprising of Dennis Law, George Best and Sir Bobby Charlton (entitled “The United Trinity!”)

Enough about the history of Old Trafford because you could easily spend all day reminiscing about this historic stadium but instead, let’s hop inside and take a look at what you can expect on your guided tour.

The Theatre of Dreams

After spending a few minutes wandering around the museum, we headed to the first floor where we met our friendly tour guide who introduced herself and immediately started our tour of Old Trafford. It didn’t take long before we entered the “Theatre of Dreams” as we stood about half way up the Sir Alex Ferguson stand overlooking this historic pitch. 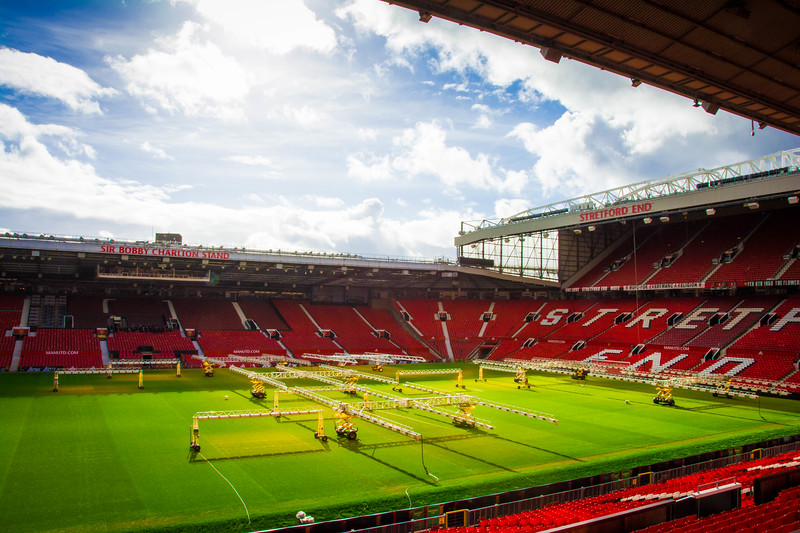 Our guide gave us a brief history of the stadium and then shared some interesting facts about the pitch itself, most notably the construction which is a “Desso GrassMaster” (combination of natural grass mixed with artificial fibers). 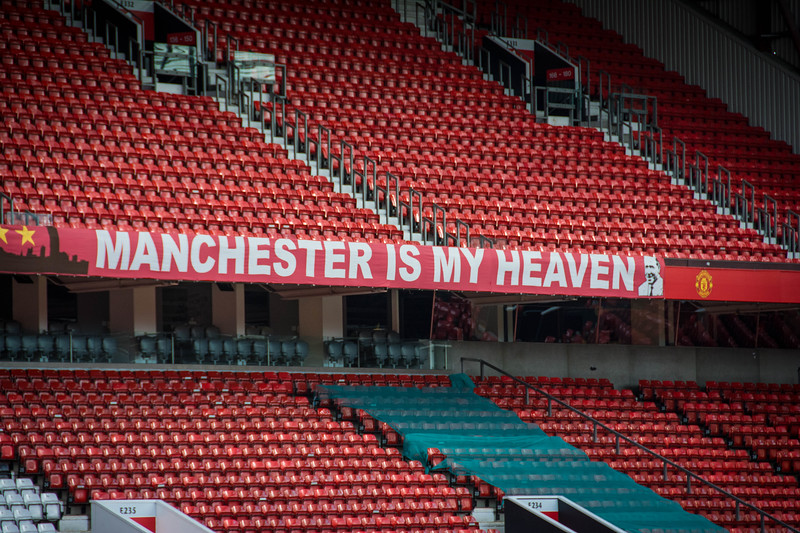 The view of the surface was slightly obstructed by a number of lights that were being used to create artificial sunlight, clearly an example of the intricate details a football club goes to in order to ensure the playing surface is perfect.

Standing in an empty stadium creates an eerie silence but it does give you an opportunity to close your eyes for a few moments and contemplate the sound of 75,000 fans cheering on their beloved Red Devils. 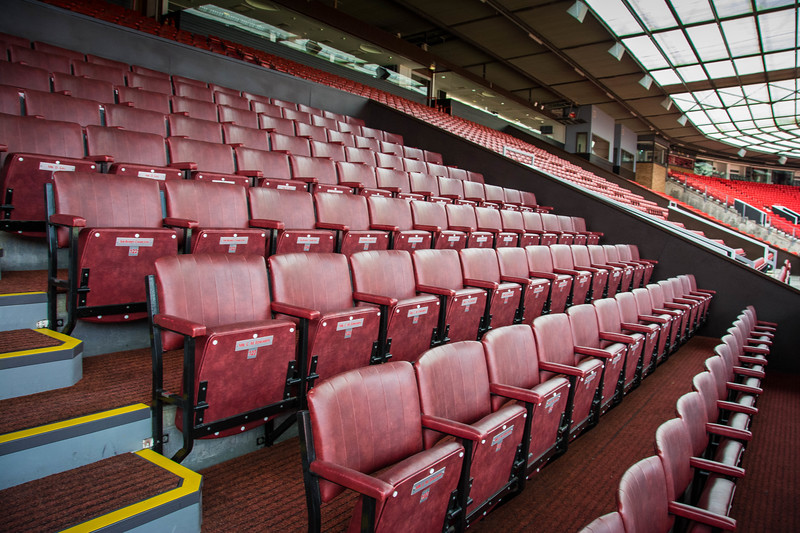 Manchester United are renowned for having some of the passionate fans in world football and it’s no surprise to hear that every season they sell out almost every match that is played at Old Trafford, including cup competitions. 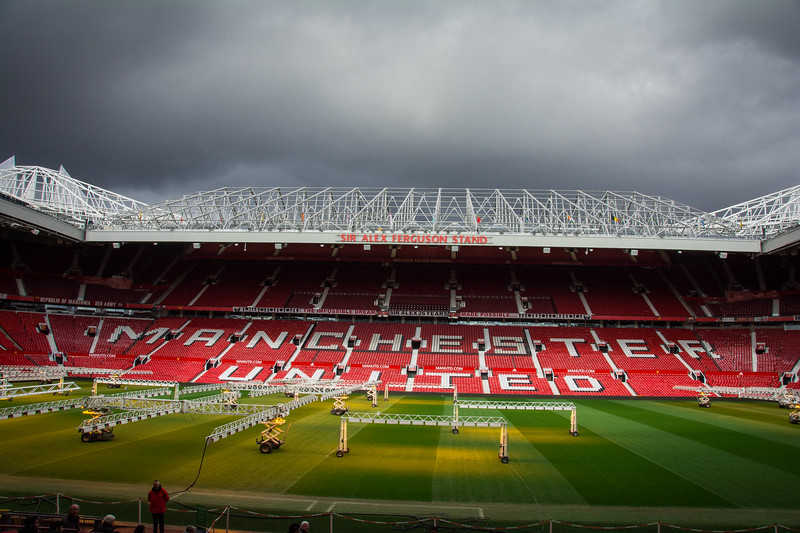 The tour continued by heading inside the stadium as we passed by pictures of some of the iconic legends associated with Manchester United, before walking out directly in front of the away fans contingent at the Stretford End of the ground.

This is a great spot for taking photographs of the stadium as we were at ground level and were able to admire the magnitude and size of the Sir Alex Ferguson Stand and opposite Sir Bobby Charlton stand. 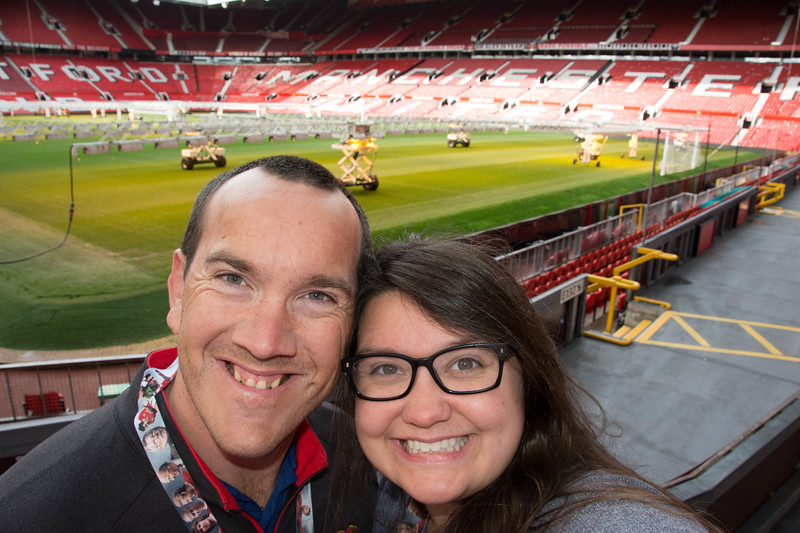 Behind the Scenes – The Changing Rooms

Ready for your moment in the spotlight? After passing through the press room where the likes of Jose Mourinho and Sir Alex Ferguson gave some of their infamous post-match press conferences, we headed to the home and away changing rooms to see what the current day players experienced before and after a match. 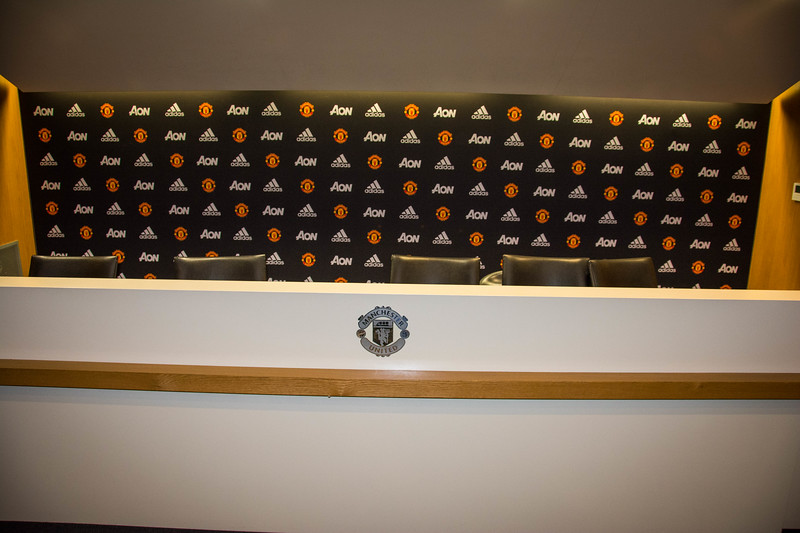 As we entered the home dressing room, we were greeted by all of the current Manchester United match day squad shirts on the hooks. 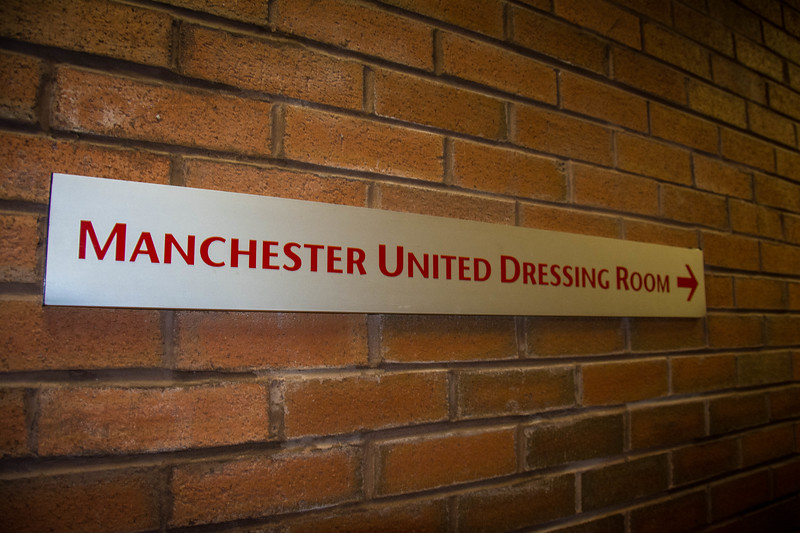 Whether you are a Paul Pogba, Zlatan Ibrahimovic or Wayne Rooney fan, you have an opportunity to take a selfie with your favorite player. 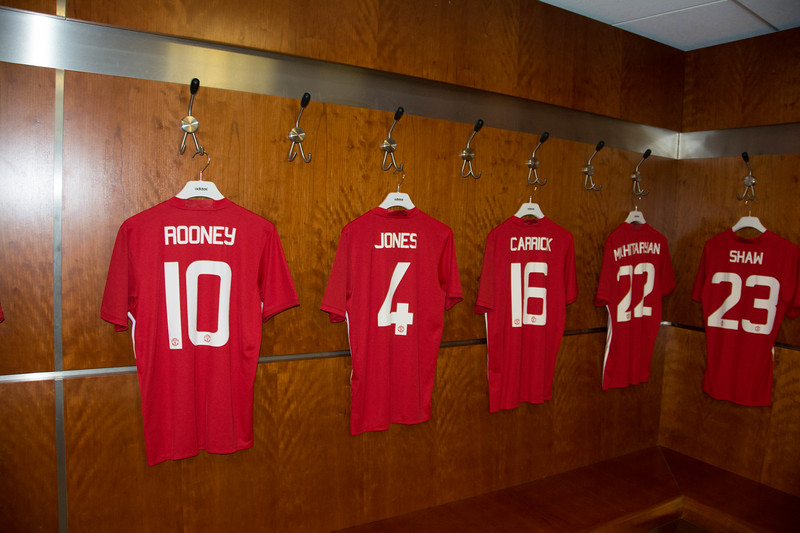 It may not be the same as actually taking a picture with the real player but it’s a pretty close second!

The away dressing room is in stark contrast to the home as it appears very basic but according to our tour guide, it’s intentionally done this way as all football clubs generally ensure the home dressing room is equipped with better decor and equipment.

You have to make the home advantage count for something right! It was certainly a little strange to see some of Manchester United’s iconic stars shirts in here, including David Beckham to represent when he played for AC Milan on his return to Old Trafford in the Champions League.

Ryan Giggs, Cristiano Ronaldo, and Robin Van Persie are a couple of other examples of United legends that have graced both dressing rooms.

Walking out of the Tunnel

Leaving the dressing rooms, we headed into the tunnel and prepared for our moment of glory as Manchester United players (or Liverpool if you found yourself on the opposing side!)

The background music started and the referee (aka our tour guide) lead us down the tunnel and into the Theatre of Dreams.

We weren’t able to walk on the playing surface but we did have the opportunity to walk alongside the field and sit in the dugout where the manager and substitutes sit during the match.

This was the perfect end to our tour and we even saw the original tunnel that is the only remaining part of the original 1910 stadium, having survived the bombing that destroyed much of Old Trafford during World War II.

It’s appropriate that this tunnel was renamed the Munich Tunnel in 2008, as a memorial for the 50th anniversary of the 1958 Munich air disaster. 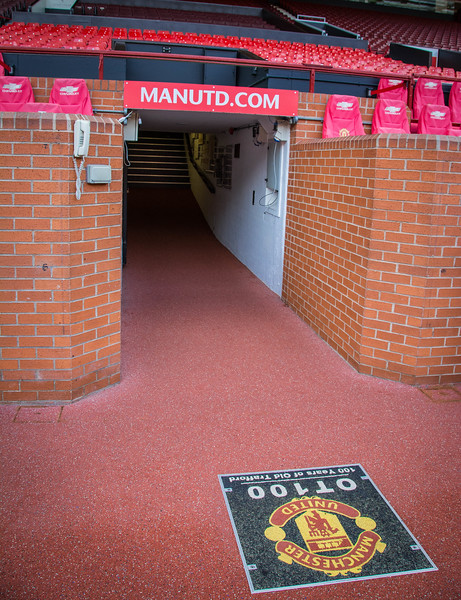 After bidding farewell to our tour guide after an incredibly informative experience around Old Trafford, we headed back inside the museum to admire some of the trophies that Manchester United have won over the years.

The Champions League trophy is perhaps the most prestigious and can be seen inside a revolving cabinet in the heart of the trophy room but if you are a true Red Devil fan, the 13 Premier League trophies will create amazing memories of Sir Alex Ferguson’s era.

Walking through the Hall of Fame gives you an opportunity to see all of the players that have worn the Manchester United shirt and offers tributes to some of the legends that stole the hearts of United fans around the world. 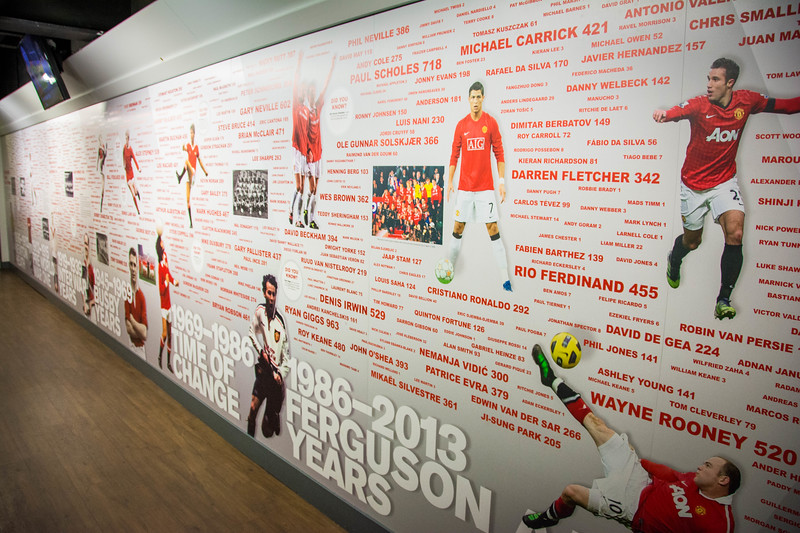 There is also a poignant tribute to the 1958 Munich Disaster which killed a number of the Manchester United players and staff. 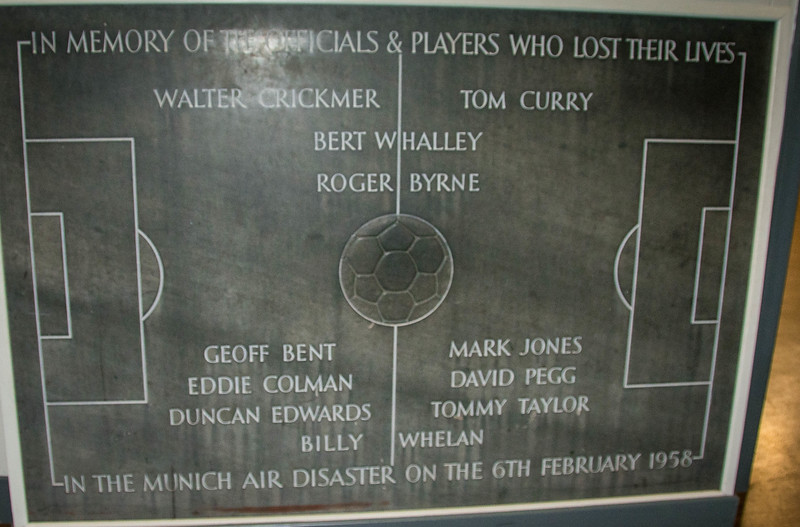 I think it’s fair to say that any football supporter or sports fan in general, would be CRAZY to not want to experience the Old Trafford stadium tour. Not only is this the home to one of the world’s iconic football teams, it is a place steeped with rich history and heritage that you immediately feel as you stand inside the stadium. 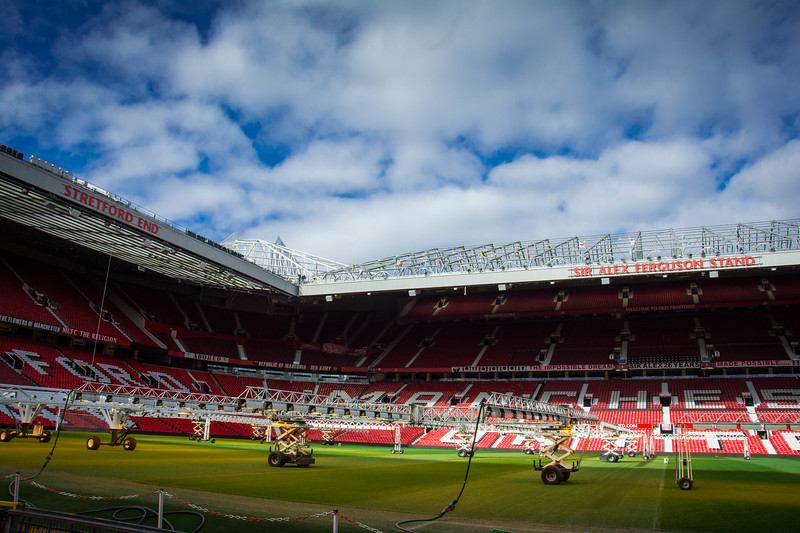 Heather is an avid fan of the “Red Devils”, so having the opportunity to visit the Megastore after the tour and purchase some official merchandise to take back across the pond was certainly something that she enjoyed. 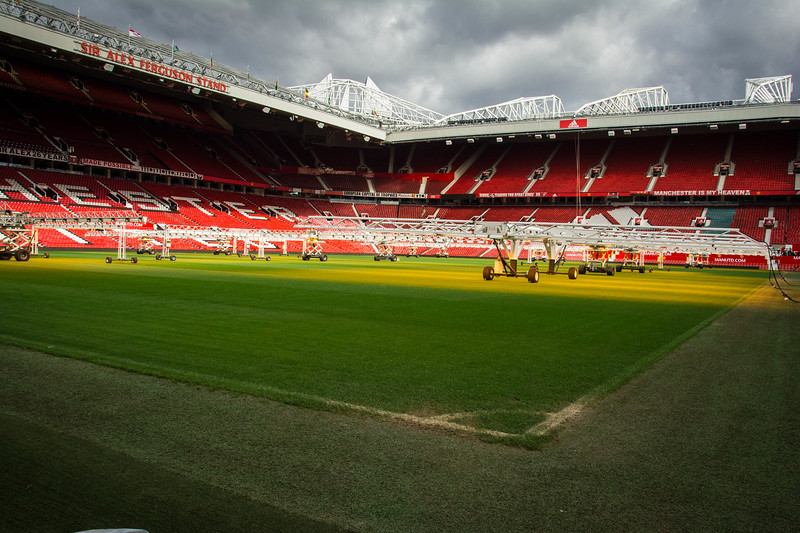 Although I am not a United fan, I will never forget the Champions League final in 1999 at the Nou Camp in Barcelona when they were trailing 1-0 heading into injury time against Bayern Munich. One of the most famous turnarounds happened during “Fergie Time” and that will always stick with me as one of the great football memories of all time. 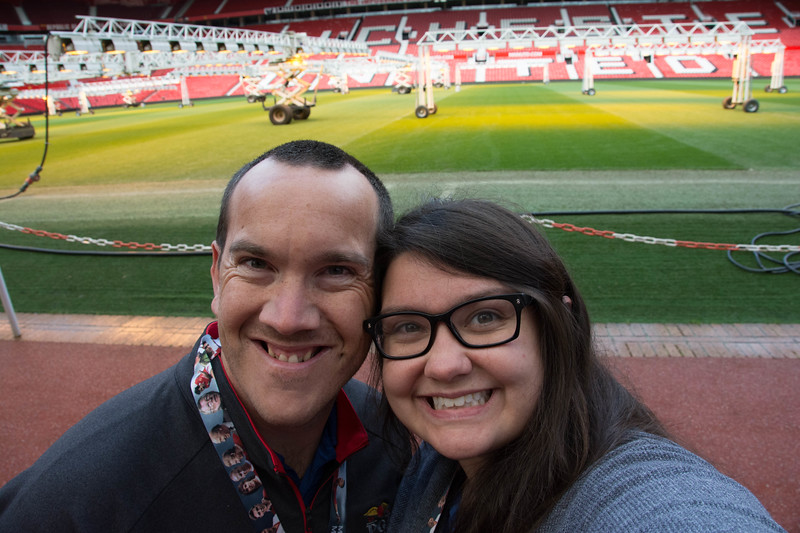 If you have the opportunity to visit Manchester (we always strongly encourage folks from the States to head to other parts of the UK rather than just staying in London!), be sure to add an Old Trafford stadium tour to your itinerary!

Disclaimer – We received two complimentary tickets for an Old Trafford stadium tour in partnership with Visit Manchester, in exchange for consideration of a blog post. The views contained within this post are entirely our personal opinion/experience and we received no final compensation for this.

My boys love visiting stadium! We try to go as often as we can but the admission fees are a little hefty especially since mine's a family of 6!

What fun! Even though we are not huge sports fans, we always enjoy watching live events, and have really enjoyed the stadium tours we have taken. For one thing, they're really marvels of architecture and engineering! Definitely considering this tour for our next UK stop. Thanks for the idea! #WeekendWanderlust

I must confess. Finding this post on #WeekendWanderlust I thought... well. I'm American, I thought Football (like American Football). My Italian Husband is now laughing rather hard at me. He has a new travel item for his list of places he's excited to go. Thank you for sharing this post and getting this Italian - American couple to laugh!