Home Hawaii Pearl Harbor Memorial Tour – Why Is It the Best Attraction?

When you think about poignant places around the world such as Ground Zero, the Berlin Wall, Chernobyl, and Auschwitz, it’s inevitable that Pearl Harbor on the island of Oahu will be on this list. We have been fortunate to experience several of these iconic locations across the globe but having visited Hawaii recently, we had the opportunity to take the Pearl Harbor Memorial Tour and I have to admit, this is one of the most heartrending and historic places we have visited anywhere. 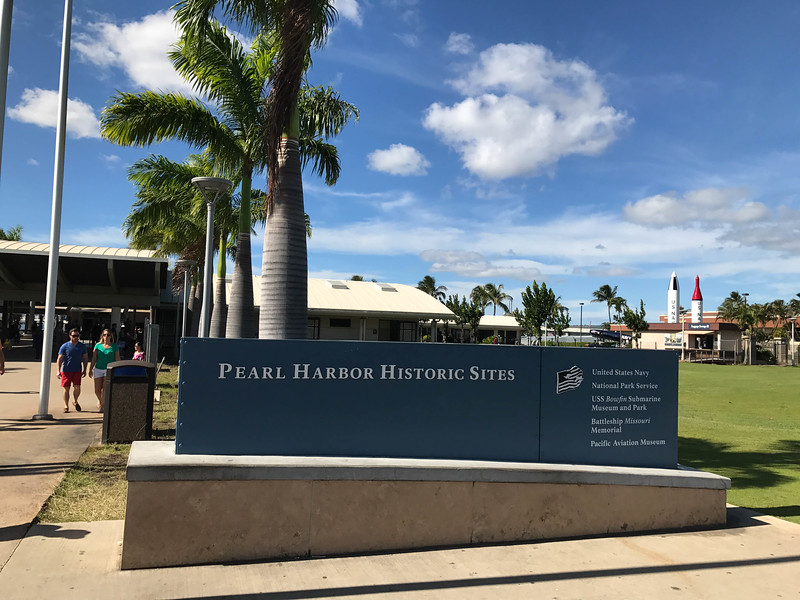 If you are visiting Honolulu, you would be crazy not to make an effort to head over to Pearl Harbor and experience the sense of poignancy and history that surrounds this attraction today.

Many of the aforementioned attractions have been transformed into “tourist traps” and I personally think this is far from the truth at Pearl Harbor, primarily because the USS Arizona Memorial is the resting place for many of the 1,177 crewmen killed in the tragic attack in 1941.

We want to share our experience taking the Pearl Harbor Memorial Tour and after reading this, perhaps you will be inspired to take a trip to Hawaii just to visit this amazing place. Don’t worry, there are plenty of other reasons to visit Hawaii also, but this is definitely a place you cannot afford to miss and should be experienced by everyone at least once in their lifetime.

Everyone has at least a basic understanding of the significance of Pearl Harbor simply because of the role it played in shaping the world we live in today. Without going into an in-depth history lesson of World War II, the events that took place on December 7, 1941, were ultimately the turning point for the United States entering the war and joining the Allies in defeating the Nazis and Japanese, albeit on two separate fronts.

I realize that younger generations like myself and Heather will never be able to relate to the events that took place but we can still appreciate the heartache and tragedy that everyone associated with this went through.

I can only imagine what friends and families of those directly impacted by Pearl Harbor go through when they step foot on the USS Arizona Memorial or walk around the museum that portrays everything that occurred.

Our visit to Pearl Harbor was shortly after President Obama and Prime Minister Abe of Japan visited this scene, an iconic date in history given that it was the first time the two leaders of the nations have come together at the spot where Japanese fighter planes struck American soil on that fateful day in 1941.

It’s no surprise to hear that the Pearl Harbor Memorial Tour is extremely popular, especially trying to get tickets to the USS Arizona Memorial. We will share a few insider secrets with you later based on our experience but let’s first take a look at some of the key information if you are planning a trip to Pearl Harbor.

There are essentially two ways to get tickets to the USS Arizona Memorial. The best aspect of visiting this iconic memorial is that it is 100% FREE.

There is a third way to get tickets that I will share with you shortly as we share our experiences at Pearl Harbor.

The USS Arizona Memorial program is scheduled every 15 minutes starting at 7:30 AM and the final one running at 3:00 PM. 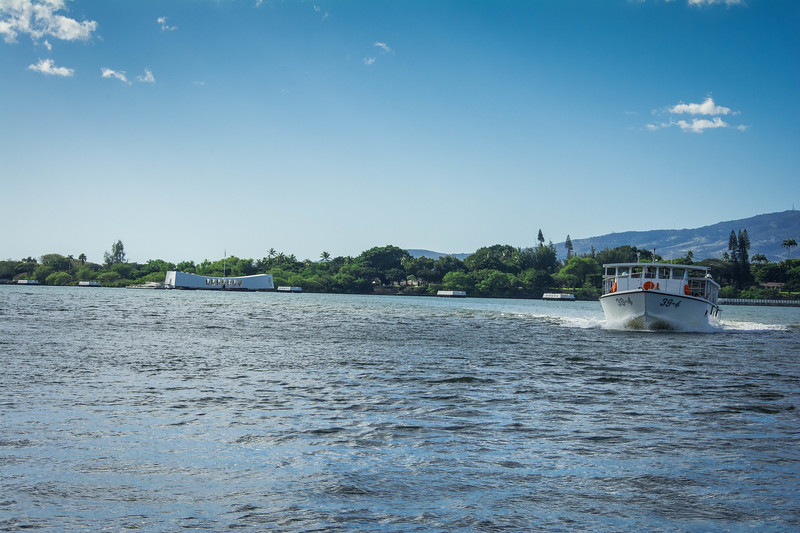 We experienced a self-guided audio tour of Pearl Harbor and we can highly recommend this option. It’s a great way to learn more information about the events leading up to the attack, during the tragedy and the immediate aftermath. 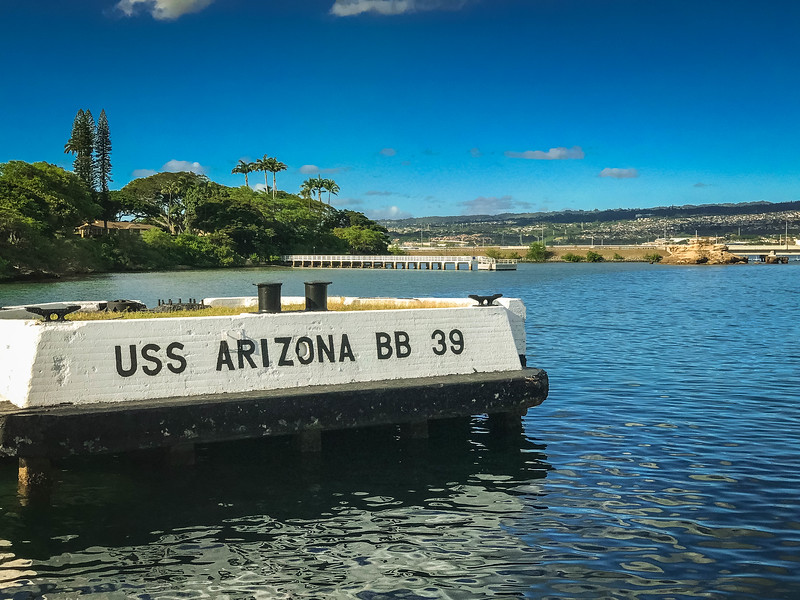 You can purchase audio tour headsets at the Visitor Information window at Pearl Harbor for only $7.50 and these are great value for the wealth of information you receive.

A visit to Pearl Harbor may primarily be focused on the USS Arizona Memorial but if you have the opportunity to experience the USS Bowfin submarine, this is a great attraction. Tickets are available to tour the submarine and museum as follows:

If you are a little claustrophobic and prefer to just explore the museum, tickets are $6 and $3. Be sure to check the USS Bowfin website for any price updates.

After collecting our headsets, we started our journey around Pearl Harbor at the two museums which are honestly a great place to start if you need some additional background information on the history here.

The two museums are aptly named “The Attack on Pearl Harbor Museum” and “Road to War Museum” and provide a detailed review of everything that happened in 1941.

A number of artifacts along with the audio coverage frequently create chilling encounters of the Japanese creating their master plan to attack Pearl Harbor.

Regardless of your nationality or knowledge of these events, you have to appreciate that this was a well-measured and calculated attack that took this key American location by surprise in the heart of the Pacific Ocean. 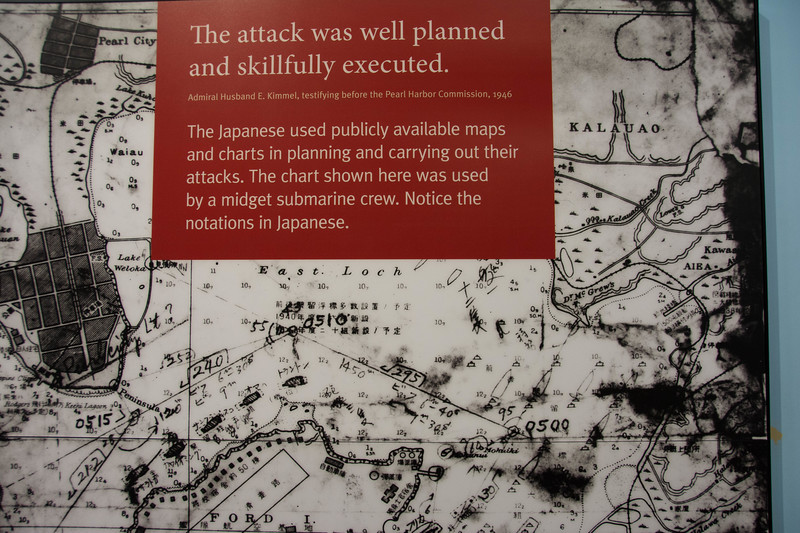 There are a number of videos depicting this attack and I’m sure that anyone visiting Pearl Harbor with a direct relationship with someone that was either killed or affected by the 1941 events, would cringe at the thought of what actually happened.

The recordings of survivors that shared their experiences offer a lasting impression on the Pearl Harbor Memorial tour and this is before you even set foot on the USS Arizona.

The stealthy, calculated risk of the Japanese approaching by air was something that was unheard of and certainly underestimated by the American defenses. 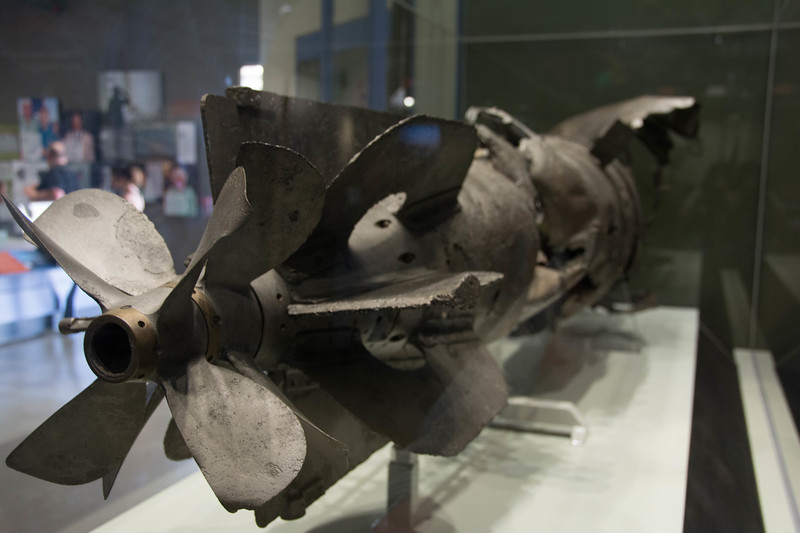 The moment the first line of attacks started by destroying key airbases around Hawaii to prevent American planes from leading a defensive front, the Japanese bombardment continued as they destroyed everything in their sight…most notably the naval warships that were docked in Pearl Harbor.

The audio tour leads you through both museums and then outside to some of the other exhibits that play an integral role in the history of Pearl Harbor.

The “Tree of Life”, designed by architect Alfred Preis, is a symbolic representation of rebirth, renewal and a reminder that we are all interconnected despite the obvious hatred that was present between the two nations directly impacted by the 1941 attack.

A short walk from the Tree of Life is the USS Arizona bell which was salvaged and restored along with one other and today provides a perfect location for visitors to contemplate in a moment of solitude as they gaze around the Pearl Harbor grounds.

Depending on the time of your boat tour out to the USS Arizona Memorial, you may opt to head over to the Contemplation Circle and Remembrance Circle to pay your respects to those lives lost. 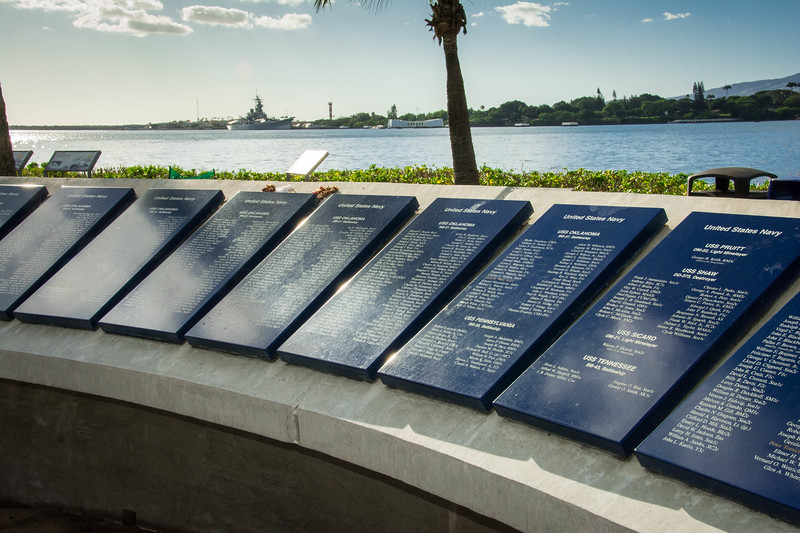 As you look over the Harbor, take a moment to consider what life was like minutes before the attack and then the turmoil that Pearl Harbor was thrown into once the first Japanese strike took place.

The USS Arizona anchor stands proudly on display as visitors walk by but in the back of our minds, we were trying to figure out how we could get on board the USS Arizona Memorial boat tour. 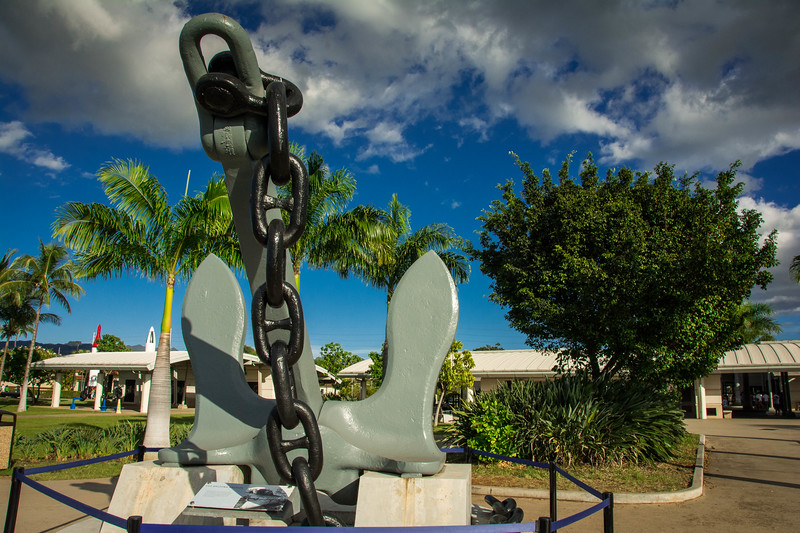 Let’s take a look at how you can experience this amazing tour if you are not fortunate enough to have advanced reservations.

If you are unlucky or simply unprepared (I think we fall into both of these categories), you may visit Pearl Harbor without a pre-booked USS Arizona Memorial tour. Don’t worry, there is a third option that I was referring to earlier.

If you walk over to the Pearl Harbor Memorial Theater shortly before a scheduled tour is about to depart, you will notice an additional line with a board indicating “stand by line”. This is where you can wait and hope for the best. The likelihood is that people will miss their tour and there will be open seats available, so just be prepared to wait and you will have the opportunity to experience this amazing memorial. 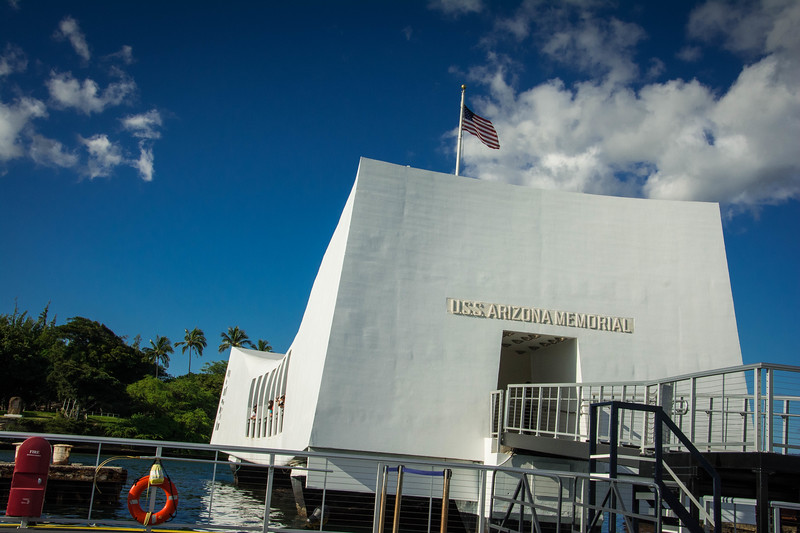 The first part of the USS Arizona Memorial is a short video that shows the attack on Pearl Harbor and the damage that was caused to the US naval fleet. At the end of the video, the doors open and you are lead out to the boat dock where you board a small vessel and head over to the USS Arizona.

You have the opportunity to take pictures of the memorial as you approach it but don’t worry if you are on the wrong side of the boat because you will have plenty of chances when you leave to take a picture.

The moment we deboarded and stepped on the memorial, we realized that this was a place that deserved nothing but 100% respect.

There is a somber mood throughout the air as you walk around the memorial and peer over the side as you realize that you are standing over the burial spot of thousands of soldiers.

I think it’s a fitting tribute that these men were laid to rest onboard the USS Arizona and perhaps the craziest aspect is that small amounts of oil still leak from the vessel, yet it is allowed to take place as this is a perfect representation of the “tears of the Arizona”. 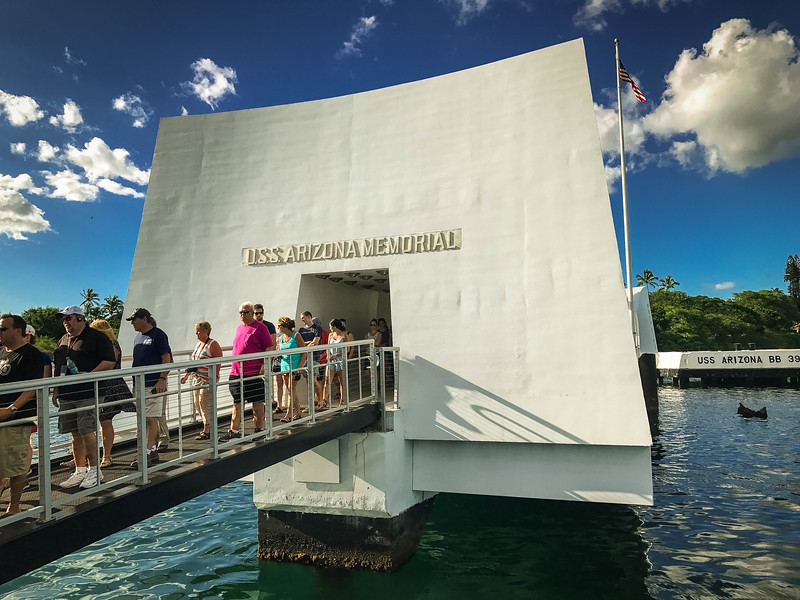 The marble wall at the end of the memorial depicts all of the names of the sailors who died aboard the Arizona. 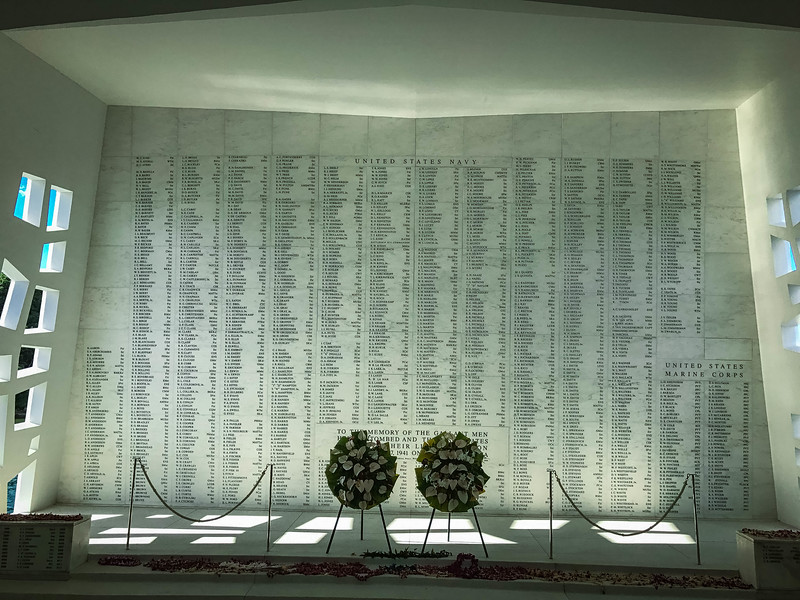 Have you ever imagined what life is like onboard a submarine? Visiting Pearl Harbor offers the perfect opportunity to experience this as you board the USS Bowfin and head down inside the submarine. 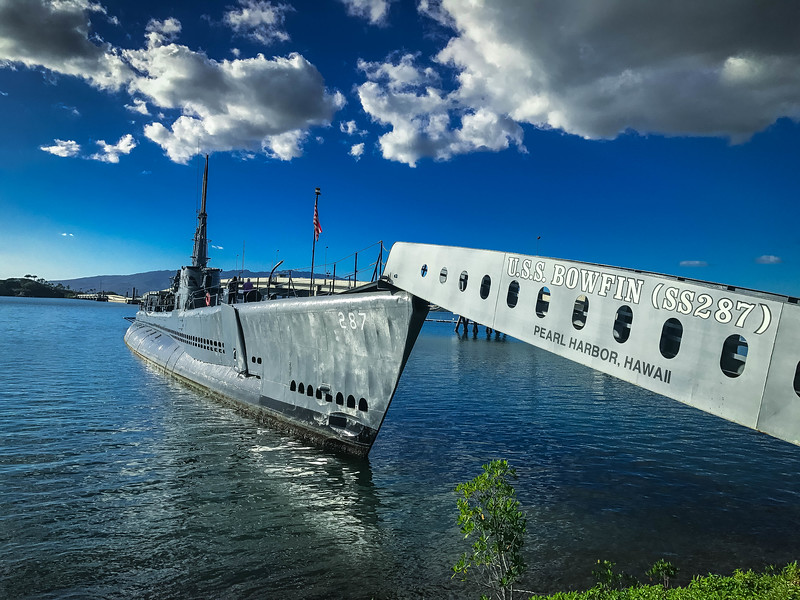 You quickly appreciate what the naval officers go through because it’s immediately noticeable that there is not much space inside a submarine.

It’s certainly not a great place for someone over six feet tall and just getting through the cabins is a real challenge.

Referred to as the “Pearl Harbor Avenger”, the USS Bowfin was launched one year after the December 7, 1941 attack. 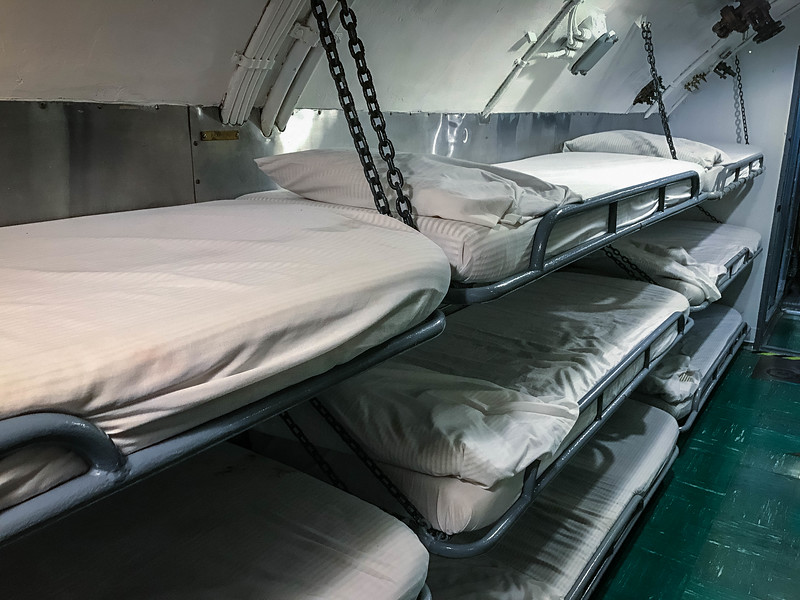 After nine successful patrols and sinking 44 enemy ships during the war, the USS Bowfin was laid to rest in the waters of Pearl Harbor and today visitors have the opportunity to experience what it was like to live and work aboard a World War II submarine. 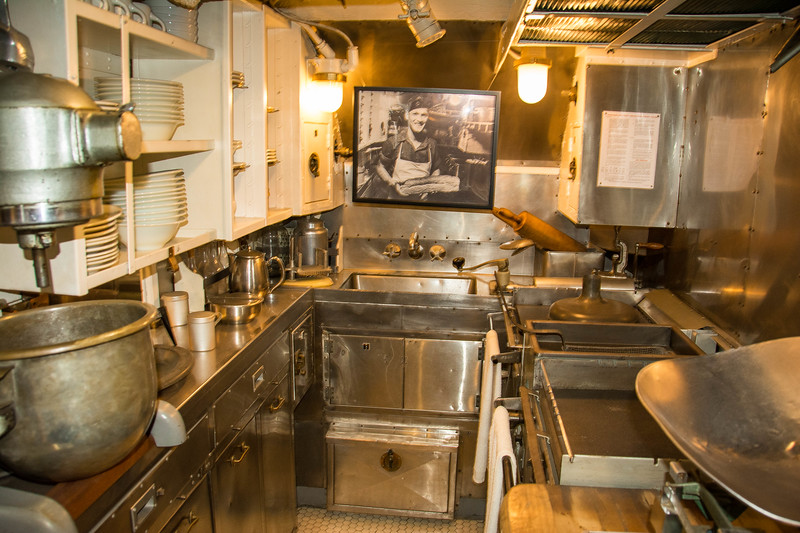 What an amazing experience!! There is really no other way to describe our feelings after spending an afternoon taking the Pearl Harbor Memorial Tour. You could easily spend all day here paying your respects and learning the details about everything that occurred in 1941 but regardless of how much time you spend here, it’s a memorial you just have to experience when you next visit the island of Oahu. 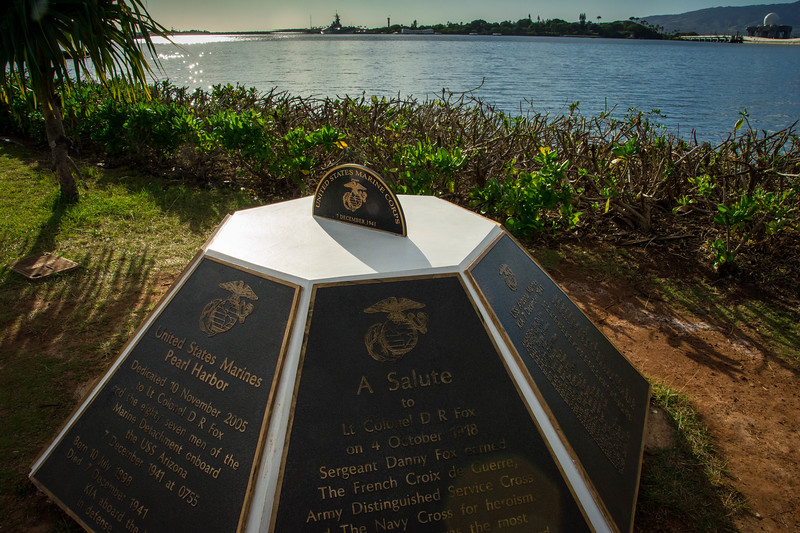 The USS Arizona Memorial is the undoubted focal point of any Pearl Harbor visit and don’t forget, even if you don’t have tickets or fail to wake early enough to collect one of the 1,300 daily tickets handed out, you can always head over to the stand by line and hopefully enjoy this awesome experience.

Disclaimer – We received two complimentary tickets for a self-guided Pearl Harbor audio tour and for the USS Bowfin, in exchange for consideration of a blog post. The views contained within this post are entirely our personal opinion/experience and we received no final compensation for this.

Why Climbing Diamond Head Needs to Be on Your Radar?

Iolani Palace Tour – Why You Need to Embrace This Royal Residence?