Home Travel Tips 8 Polar Explorers That Will Spark Your Wanderlust

As travelers, we all have some crazy stories to tell. But probably the best of them all come from polar explorers of the past centuries. They braved the most extreme conditions and reached the poles despite having none of the tools we have today.

We are delighted to collaborate with our friends, Cez and Agness, from eTramping who have pitched in with some of their favorite dangerous adventurers. The following eight polar explorers will definitely rouse your thirst for exploration.

Each one has a unique story but all of them have one thing in common, their passion for travel and desire to explore the unknown! I am sure we can all relate to this philosophy but let’s see exactly why each of these polar explorers are a true inspiration when it comes to sparking the wanderlust inside us.

We couldn’t have placed any other polar explorers in “first place,” even though this is by no means a Top 10 style list. Sir Edmund Hillary has feats that would make many other adventurers blush at the thought. For one, you might know him as the first man to climb Mt Everest all the way to the top. Along with his expedition partner from Nepal, Tenzing Norgay.

Not only that, but he also went to both North and South poles. He is known as the first person to reach the southern point using a motor vehicle. In 1985, he accompanied astronaut Neil Armstrong on a flight to the North Pole. Are you brave enough to follow in his steps?

How often can you talk about polar explorers who have also fought in both the French Revolutionary Wars AND the Napoleonic Wars? Having decided that being a Royal Navy officer and knighted by two different kings wasn’t enough, he set out to put his name on the map.

Franklin’s expedition to find the famed Northwest Passage ended in disaster. It also seems that he and his crew disappeared off the face of the Earth. Nonetheless, his name has been commemorated in the farthest regions of the world. There are actually two Franklin Islands right now, one in Greenland and one in Antarctica – in honor of his dedicated exploration.

Robert Peary isn’t just famous for his magnificent mustache. He is considered to be the first of any polar explorers to have reached the North Pole. We say considered because there are still some researchers who doubt his claim.

For example, his rival Frederick Cook also claimed to have achieved this feat one year before he did. Still, we can’t deny that Peary remains one of the most influential polar explorers to date. His dog-sledding expeditions throughout the Arctic are the stuff of legends.

Shackleton was also among the polar explorers with dreams of greatness, just as Sir John Franklin before him. He and his exploration team had hoped to be the first people to cover Antarctica. As with Franklin, his expedition didn’t have the desired outcome.

But this time, the story had a happy ending. While his ship “Endurance” had been ruined by icebergs, he and his crew managed to reach Elephant Island. His most impressive feat, however, was an over 1200 km voyage in a lifeboat – all the way to South Georgia. In the end, all of the “Endurance” crew were rescued thanks to his actions.

The second of the polar explorers on this list to be a British navy officer, Ross’s expedition was the first to discover the northern magnetic pole. His trips also took him over to the icy south, where he helped map the shores of Antarctica (including the Ross Sea named after him). If you’re traveling to the continent, you can thank this man – for he helped pave the way for other polar explorers.

If there’s any polar explorers that can match the feats set by Sir Edmund Hillary, it’s this guy. He didn’t climb the Everest, unfortunately, but he was still the first person to reach both poles. Back then, explorers from every corner of the world were “battling” for that feat.

For example, take Robert Falcon Scott, the one who actually found out that Antarctica wasn’t just a bunch of icebergs, but actually a continent. He also raced to the South Pole around the same time as Amundsen, but his crew only reached it an entire month later.

Amundsen also managed to fulfill Sir John Franklin’s dream to traverse the Northwest Passage. That’s a big plus to his exploratory prowess. Not only that, but he also led the first airborne journey to the North Pole. Quite an exciting life, if you ask us – and a worthy rival in skill to Hillary.

Nansen had won a Nobel Peace Prize for his actions in World War One, and he was an accomplished explorer as well. On the other hand, he had some eccentric ideas about how to reach the geographic North Pole. He believed that developing a ship frozen in drift ice would take him and his crew all the way there. The shipbuilding was a success – but the same can’t be said about his journey.

After about a year and a half, he eventually settled for dog-sledding all the way there with one of his crew members. They didn’t manage this feat either, but they did get pretty far north. At the time (1895), they broke the record for the farthest north point anyone had reached. We have to commend his efforts – drifting on ice for that long can’t have been very fun!

S. A. Andrée is a special case among the polar explorers we’ve named so far. He never actually made it to the North Pole, though not for lack of trying. Many important figures such as King Oscar II, the Royal Swedish Academy of Sciences, and even Alfred Nobel supported his cause.

He and his crew had attempted to get there with a hot air balloon ride, but the conditions were too critical to succeed. They still traveled almost 500 km before they met their untimely end in the Svalbard archipelago. Today, if you go on a Svalbard cruise and visit the Nordvest-Spitsbergen National Park, you can still see the launch site of one of his attempted expeditions.

Do you have any polar explorers you look up to? 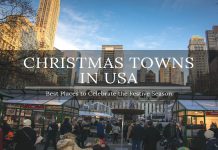 27 Best Christmas Towns in USA to Enjoy the Festive Season 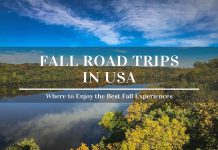 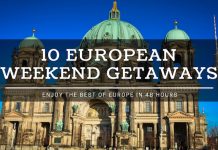 10 Amazing Weekend Getaways in Europe You Will Love