Take a moment to think about relaxing in an idyllic antebellum home with a gorgeous garden and the sound of birds chirping away in the background. For many of us, this may be a distant dream but for those fortunate enough to live in the spectacular Twickenham historic district in Huntsville, Alabama, this is a reality they can wake up to every day. If you have never visited Huntsville, you are in for a real treat with the breathtaking collection of antebellum homes on display in this lavish neighborhood. 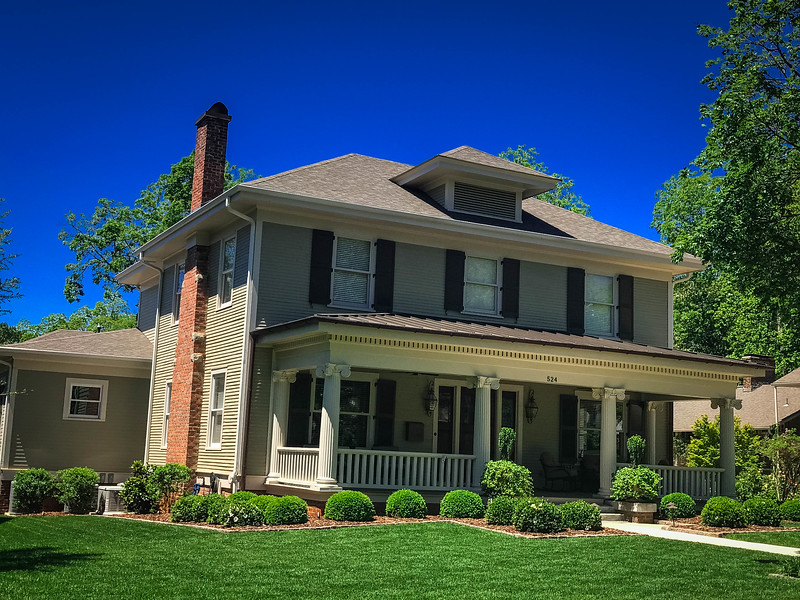 During our recent visit to North Alabama for the TBEX travel bloggers conference, we spent a couple of hours wandering around the Twickenham district. I love the history behind this part of Huntsville and appreciate why this is such a popular part of the city that the local community is proud of.

If you are avid architecture aficionado, it’s a no-brainer that the Twickenham historic district should be high on your radar. If not, well there are plenty of other things to do in Huntsville to keep you occupied.

The city offers a number of walking tours around this historic neighborhood given the popularity among visitors but we think that a self-guided tour is just as rewarding. Hopefully, our guide will give you a few ideas as to the best streets to wander down and perhaps inspire you to visit in the near future.

We always hear the term “antebellum” when we are describing gorgeous architecture in the Garden District of New Orleans, or in this case, the Twickenham historic district in Huntsville. It’s fair to say that this style of architecture is beautiful but what exactly are we talking about in terms of the historic period?

The Antebellum Period in American history is generally considered to be the period before the civil war and after the War of 1812. (History.net)

This thriving era is certainly one that can be renowned as being a period of economic growth, primarily because of the plantation system. However, as with all economic upturns, there will always be a negative connotation associated with it. This is where the topic of slave labor comes to fruition and certainly, Alabama is one of the many Southern states that have been at the forefront of mass slavery arguments in recent years. 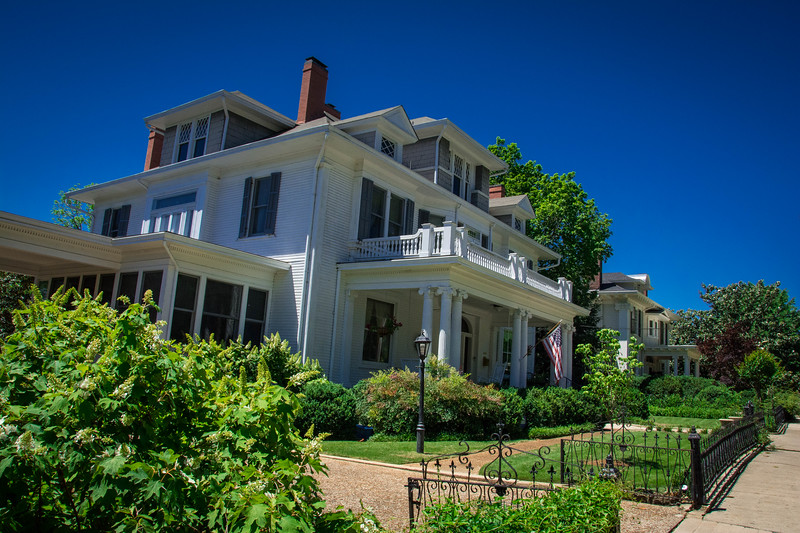 Let’s focus on the positive attributes of the antebellum era, particularly the gorgeous architectural constructions that collectively form the Twickenham historic district.

Huntsville’s area of antebellum architecture epitomized by Federal and Greek Revival styles dates back to the early 19th-century. Introduced to the city by Virginia-born architect George Steele in 1818, the name of this neighborhood is associated with the original owner of this land, LeRoy Pope. Pope’s relative, Alexander Pope, was one of England’s famous poets during the 18th-century, and LeRoy opted to name this area after the London suburb where Alexander lived – Twickenham! 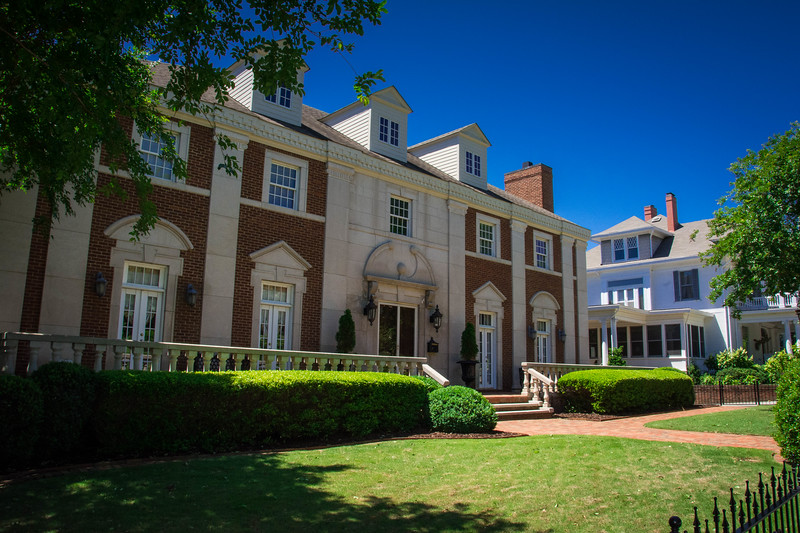 Today, the “Twickenham” we are familiar with in England is associated with the stadium that hosts England’s international rugby matches but in Alabama, this name is all about the gorgeous neighborhood where some of Huntsville’s finest mansions can be found.

Huntsville is actually proud to boast three iconic historic districts. The Twickenham, Old Town, and Five Points all offer unique architecture and distinctive reasons to explore these neighborhoods. Although it’s easy to wander around all three of these, it’s plausible that you may wander from one to the other and lose a sense of your location. 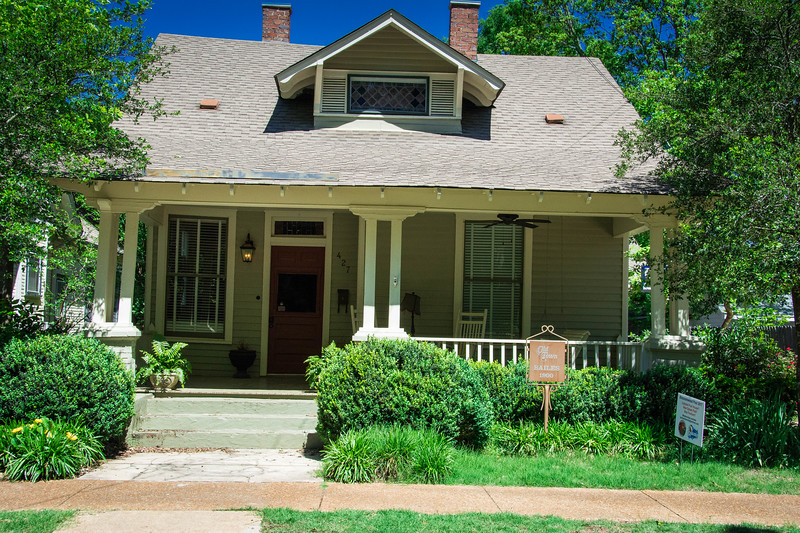 Don’t worry, Huntsville makes life easy for you by having three distinctive street signs representative of each area.

Let’s take a look at the area known as the Twickenham Historic District in Huntsville on a map to give a better perspective on the size and scope of this region.

It’s certainly feasible to walk this area or alternatively you can hop in your car and drive around if you don’t have much time. We strongly recommend walking around to gain a full appreciation of the history and amazing architecture this district has to offer. 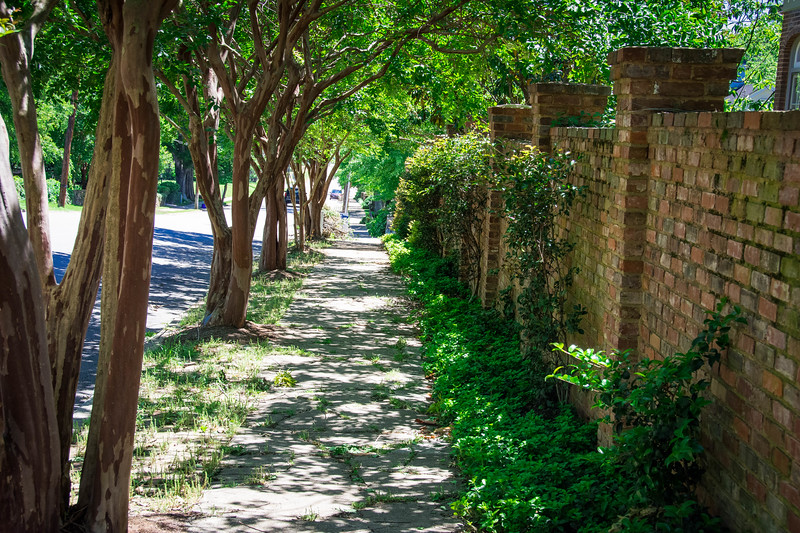 Our journey started in the heart of the Twickenham district as we entered along Williams Avenue before really starting to explore the gorgeous homes along McClung Avenue.

As you will see from the following images, many of these antebellum homes feature a stake outside with a name and date to give you a better sense of where you are in the neighborhood along with the associated history. 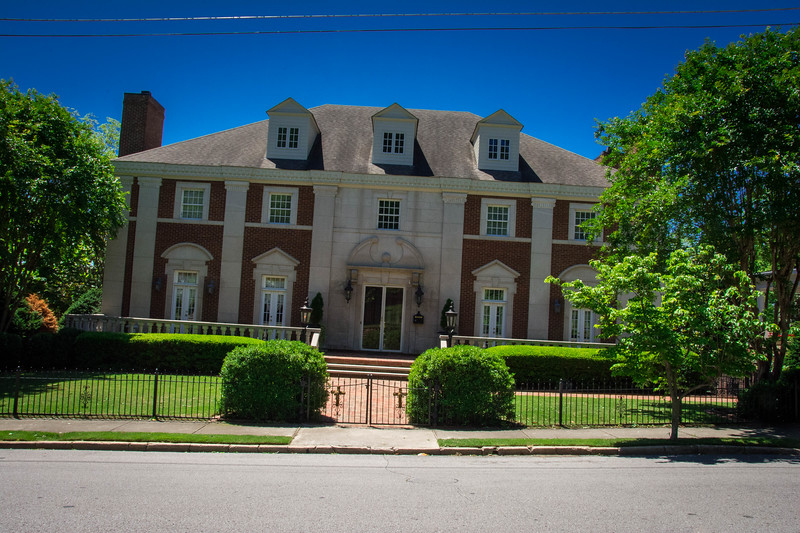 Some of the most historic homes along this stretch of the Twickenham historic district include the following: 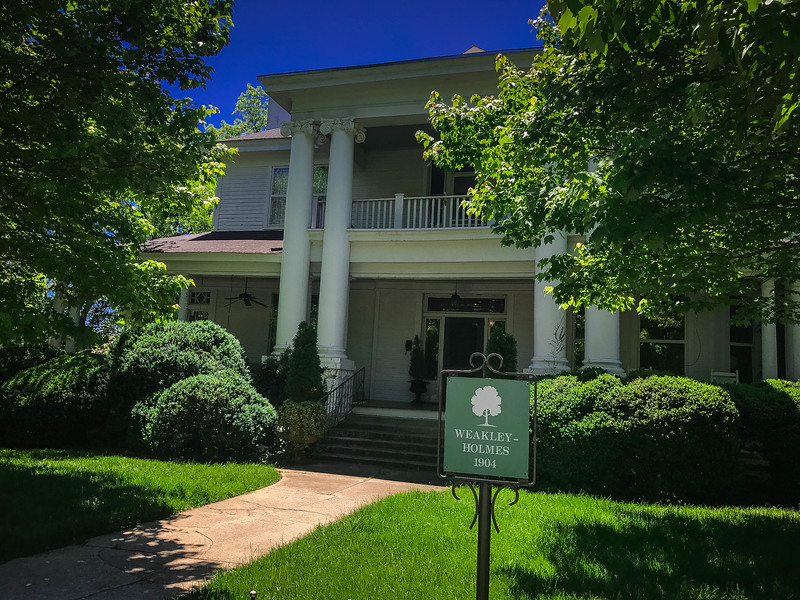 However, the beauty of walking through the Twickenham district is that regardless of the history behind each of the homes, you can still appreciate the immaculate beauty of this architecture. 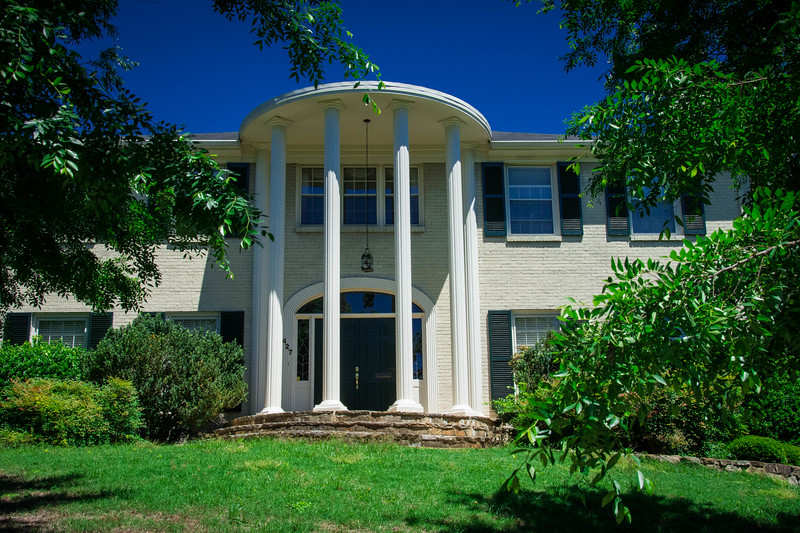 I love how the community has continued to preserve these homes in their original state and emphasize the iconic features that we associate with the traditional styles of the 19th-century antebellum period.

After walking to the bottom of McClung Avenue, we turned right on SE California Street which is essentially the edge of the Twickenham District before turning right again on Newman Avenue to head back deeper into this neighborhood. 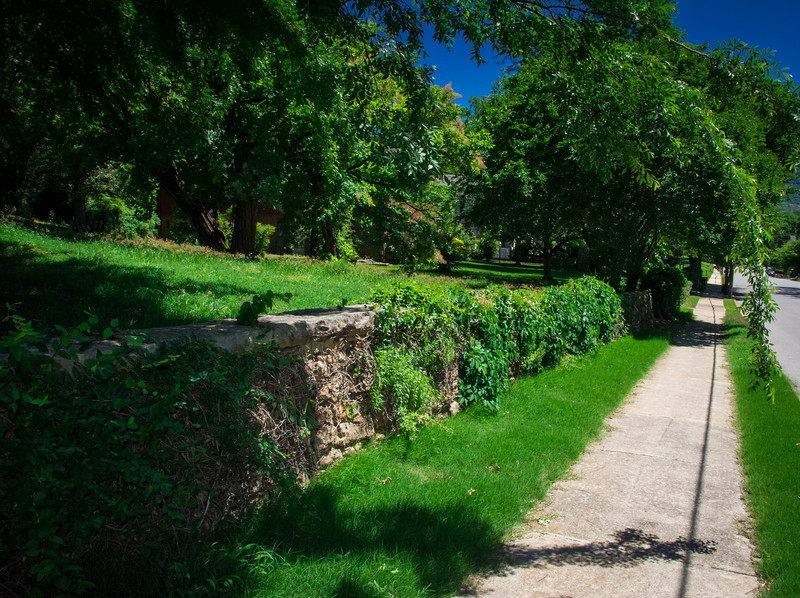 If you were impressed by the luxurious collection of homes along McClung, you are in for a real treat when you arrive at Adams Street. In my opinion, this is one of the most spectacular streets that I have ever walked along in terms of the breathtaking real estate.

I have no idea about the value of these homes but I think it’s fair to say you better have a few dollars set aside if you are interested in purchasing one of these beauties!

Some of the iconic homes you will stumble across along Adams include the following:

The elaborate details of these Victorian style residences are an awesome sight, particularly if you have a strong interest in the finer details of architecture. 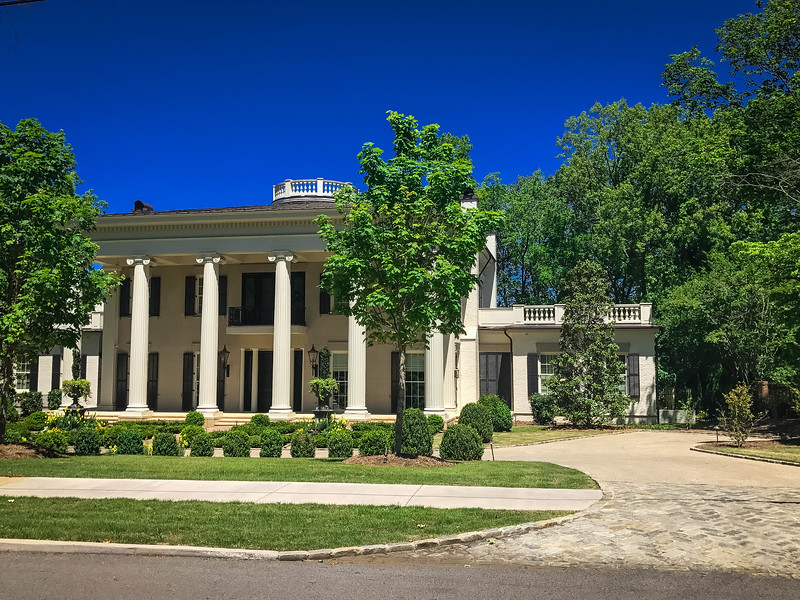 The Greet-Leslie House, for example, is a perfect reflection of Folk-Victorian style with a relatively plain construction but embellished with a gorgeous decorative trim.

The McDowell House is probably one of my favorites around the Twickenham district. Inspired by the Greek-Revival style of architecture that we see across many historic neighborhoods in the United States, this 19th-century home is set back from the sidewalk but offers an eye-catching design that you cannot help but admire. 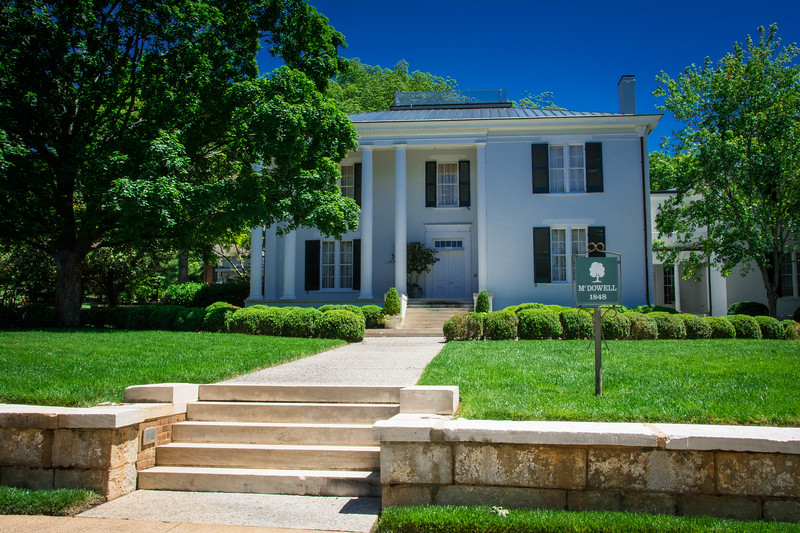 A journey through the Twickenham historic district wouldn’t be complete without wandering along Franklin Street. Unfortunately, hindsight is a wonderful thing and we failed to visit this particular street on our recent trip to Huntsville, hence the reason why we are lacking any of our own pictures.

However, we don’t want you to make the same mistake and hopefully, you will have time to explore some of the following iconic homes:

These are just a few of the gorgeous homes that you can experience. Featuring a unique combination of Queen Anne and Colonial Revival style architecture, the Van Valkenburgh home located on the corner of Franklin and Williams is impossible to miss. Regardless of your architectural preference, you can be sure to stumble across a design that you will love along Franklin Street.

After spending some time researching the Twickenham historic district, missing out on exploring Franklin Street is definitely one of our main regrets from our recent visit to Huntsville.

The Twickenham historic district is a gorgeous part of Huntsville that anyone visiting the Rocket City should add to their itinerary. You could spend a couple of hours walking around this neighborhood and admiring the spectacular architecture on display. Although we had an awesome time exploring the parts of the Twickenham district that we did, we are raring to go back so that we can see Franklin Street and other streets with our own eyes.

If you have taken the New Orleans Garden District tour, you will know that this is the iconic example in the United States of antebellum grandeur. However, after exploring Huntsville’s equivalent, I would certainly argue that this neighborhood is just as impressive, though of course, it doesn’t boast a large number of celebrities like New Orleans does.

Have you visited Huntsville’s Twickenham historic district? Are you an avid fan of gorgeous architectural designs?

44+ Things To Do in Huntsville, AL That Guarantee Family Fun

[…] Enjoy an Amazing Tour of the Twickenham Historic District […]

How to Appreciate a Visit to the Huntsville Botanical Garden?

[…] particularly when the amazing US Space and Rocket Center or the historic antebellum homes of the Twickenham historic district awaits you. However, if you choose to add Huntsville Botanical Garden to your itinerary, I […]

Gorgeous Chris. Yes big fan. I recall visiting antebellum homes in South Carolina many years ago. I felt transported back to those pre Civil War times.