Sunday September 30th, 2012 was the scene of the most amazing comeback in golfing history as Europe fought back from 10-4 behind midway through Saturday’s Fourball section to seal an astonishing 14 1/2 – 13 1/2 victory over USA in the 2012 Ryder Cup.

Only a week after travelling to the TOUR Championship in Atlanta, GA, we were unsure as to whether we could justify the 9 hour drive on Friday night knowing that we would have to do the same drive on Sunday evening following the golf. Knowing that the Ryder Cup is only once every two years, we decided to purchase two Sunday tickets for a little over $400 and venture north to Chicago, IL.

Facing a deficit of 10 – 6, Europe were serious underdogs heading into the final day singles but captained under the Spanish maestro, Jose Maria Olazabal, the strong European contingent continued their never say die attitude in a desperate hope that the ‘Miracle at Medinah’ could prevail. 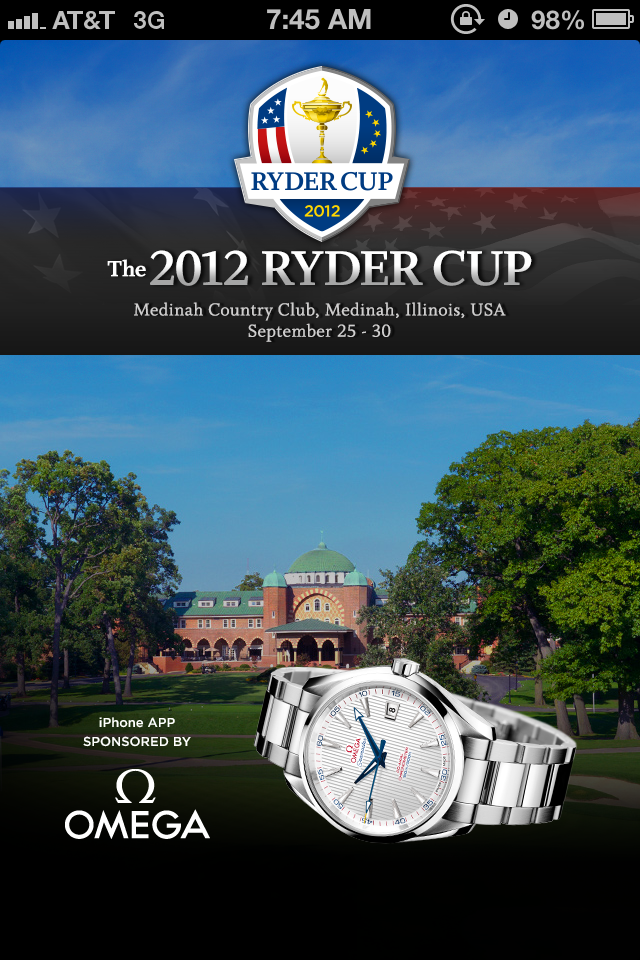 The scene was set on the practice green and first tee with the vociferous American crowds chanting ‘USA, USA’ and the European ‘Ole’s’ struggling to make any sort of impact.

No fear, what USA did not possess was a certain Mr. Ryder Cup – Ian Poulter. The Londoner is an absolute legend in Ryder Cups and truly shows his patriotism with his heart on the sleeve reactions. He certainly set the scene for the Sunday play with a delicate chip-in for birdie on the first which gave the Europeans the slightest of hopes that this could be their day. 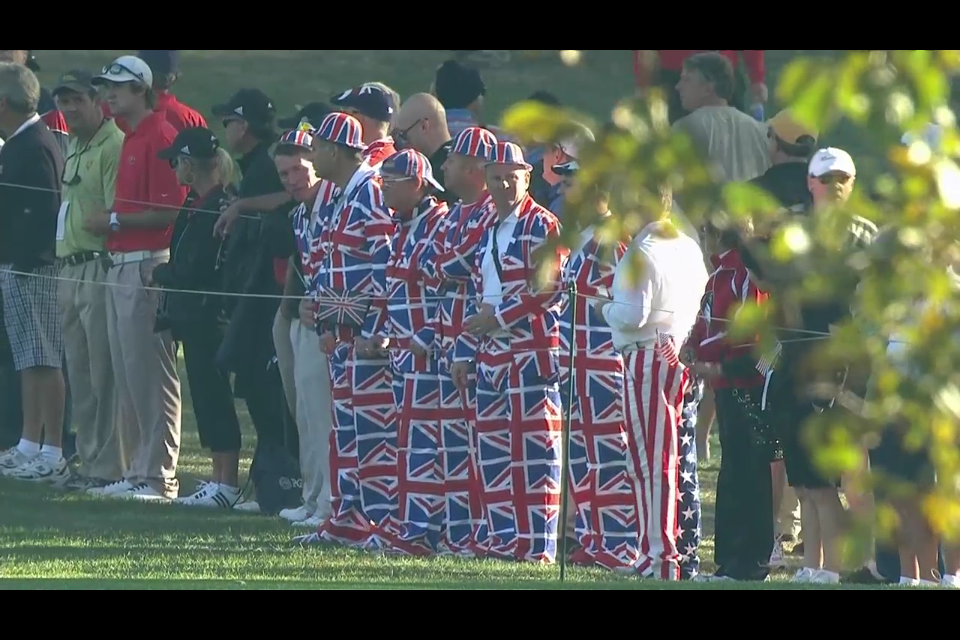 Throughout the morning, we walked around the course catching glimpses of pure class from the Europeans and the Americans struggling to stay in touch with the apparent comeback. Even so, the US team still remained favourites with the likes of Phil Mickelson fighting back against Justin Rose after falling 2 down early in their encounter and Webb Simpson taking the initiative against the inspired yet inconsistent Poulter.

We found an excellent spot at the furthest point of the course around the 6th green, 7th tee, 9th green and 10th tee all within close proximity. We spent the majority of the early afternoon here and then moved over to the 15th green which was a key hole on the course, a driveable par 4 with water lining the right side of the hole.

Immediately after we arrived, Keegan Bradley drove his ball left against Rory McIlroy not far from where we were standing giving us a great opportunity improve our view. Watching Bradley hit an impressive flop shot to a pin location just over the greenside bunker was soon followed up by the cheers of McIroy holing his putt to win the hole sending the European fans into uproar. The slight chance at the beginning of the day for a European victory was now becoming a possible reality. This became even more possible when Paul Lawrie followed Luke Donald, Ian Poulter and Justin Rose in becoming the third European winner to reduce the score to 10-9.

We watched all the remaining groups come through including Lee Westwood’s 15 ft birdie putt which saw another European roar sending shockwaves across the course. With the scores tied at 13 – 13 and only two matches remaining on the course, we headed to the 17th and 18th where we saw Steve Stricker fail to get up and down against Martin Kaymer to go 1 down. With Tiger Woods in the final match struggling to see of the spirited Italian, Francesco Molinari, Stricker new that he had to win the 18th to salvage the American’s disastrous meltdown.

We lucked out as we approached the 18th green finding an excellent viewing point to the left of the green among the loud European following. After Stricker sent his first putt wide of the target, we knew that Kaymer had two putts to secure the Ryder Cup but we were left biting our nails as Kaymer slipped his first effort 6 ft beyond the cup. With thousands watching, Kaymer held his nerve to send us into raptures. 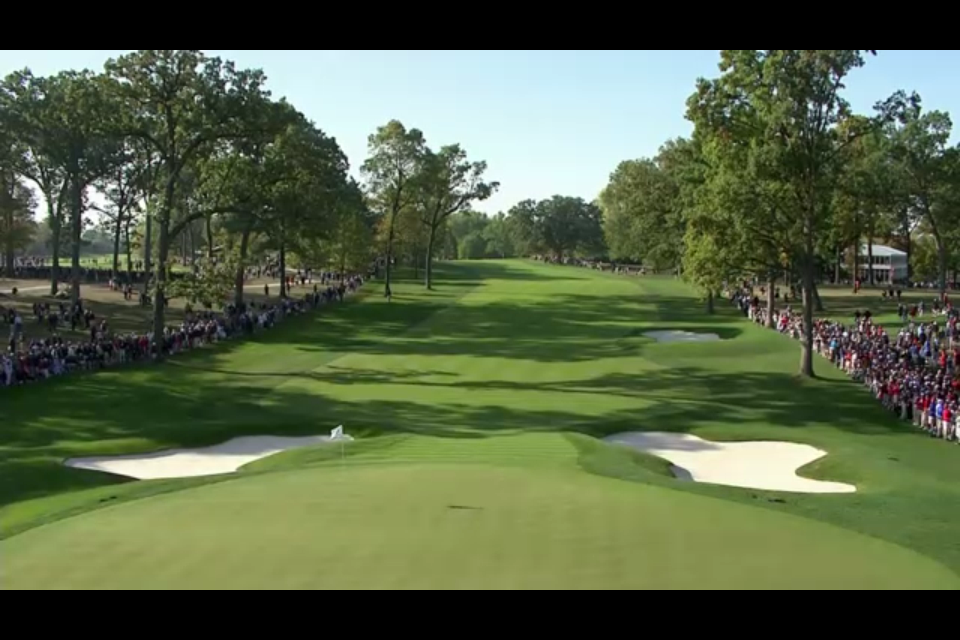 Now I know that I keep referring to us as I am a die-hard European golfer but Heather, with her American heritage, couldn’t help but follow the passionate European supporters especially when the atmosphere became electrified following Kaymer’s winning putt.

What an amazing day and probably the greatest sporting event that I have ever been part of!!

This will long live in our memories along with all those typical European chants such as “Ole, Ole” and “There is only one Ian Poulter”!!!

Why the 2016 Ryder Cup Tournament Was Amazing to Watch?

[…] have been incredibly fortunate to visit three consecutive Ryder Cups, dating back to 2012 at Medinah Country Club in Chicago, 2014 at Gleneagles in Scotland and most recently, the 2016 battle at Hazeltine National Golf Club […]

5 Epic Reasons You Should Want to Visit Minnesota

[…] for the Ryder Cup which in itself is an awesome experience, at least based on our previous trips in 2012 to Medinah in Chicago and 2014 at Gleneagles in […]

Top Tips for a Weekend Getaway to Chicago