The Ryder Cup tournament is the pinnacle of all golfing events around the world, especially for folks either side of the pond. Since 1927, the battle for bragging rights between the United States and Europe (formerly just Great Britain and Ireland) has been an ongoing encounter and if you have never had the opportunity to experience this, you are in for a real treat! 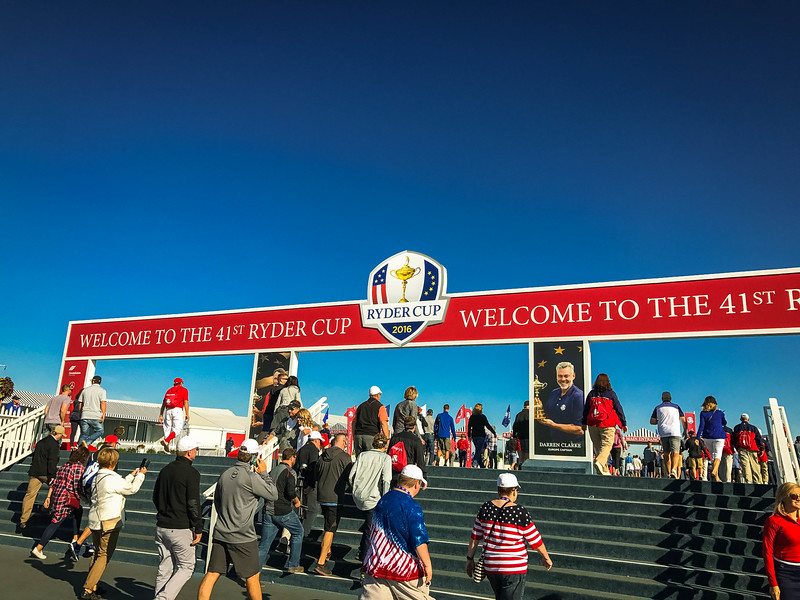 We have been incredibly fortunate to visit three consecutive Ryder Cups, dating back to 2012 at Medinah Country Club in Chicago, 2014 at Gleneagles in Scotland and most recently, the 2016 battle at Hazeltine National Golf Club in Chaska, Minnesota. We have enjoyed attending all three and look forward to visiting many more in the future.

The Ryder Cup is unlike any other golfing event, in fact, it is the exact opposite. Golf is renowned as being an individual sport but every two years, teams from USA and Europe come together in this team-centric environment and work together to win the ultimate prize.

A Tribute to The King

If you follow the world of golf, you will know that the 2016 Ryder Cup tournament was an extra-special experience because of one man – Arnold Palmer!

This tournament was the ultimate tribute to this sporting legend. Not only did Arnold Palmer change the face of golf, he was an iconic individual around the world that everyone loved.

The conduct of players, fans (99% of them) and everyone associated with the Ryder Cup was a fitting reflection on Palmer’s legacy and approach to life. I think it’s fair to say that “The King” would have been proud to be part of the 2016 Ryder Cup.

The most rewarding things you do in life are often the ones that look like they cannot be done. (Arnold Palmer)

I think it’s fitting to include the above quote, especially when we relate golf to our desire to explore the world. We are frequently told that traveling as much as we do is impossible and unrealistic for most people. But our response is frequently related to what Palmer states when he suggests that the most rewarding experiences are those that you have to work for.

For those of you unfamiliar with the Ryder Cup, the 2016 tournament was held at Hazeltine National in Chaska, about 15 minutes southwest of Minneapolis. The event is played over three days with the first two days comprising of two sets of four matches (fourballs and foursomes) and the final day where all twelve members of the two teams play head to head in singles play.

We attended Hazeltine on the second and third day after spending an amazing day exploring St. Cloud and of course preparing for the Ryder Cup experience by playing 18 holes at Territory Golf Club in the Granite City. 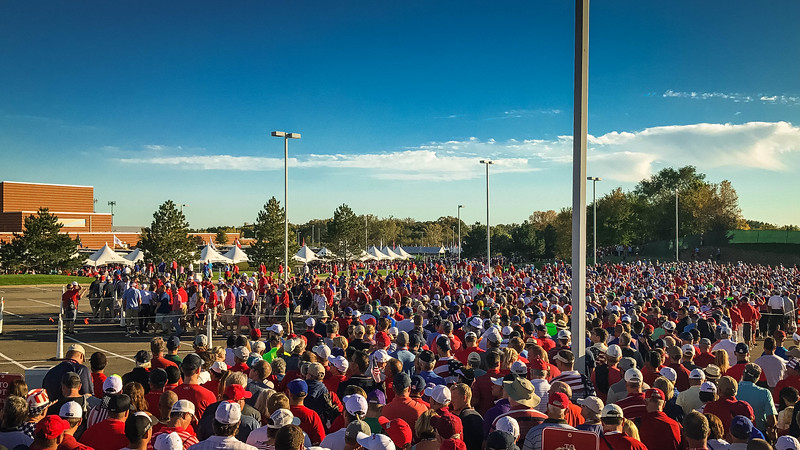 Rumors across social media suggested that public parking was a nightmare, so we headed to Canterbury Park around 9:00AM on Saturday morning hoping that the rush had already passed. We were pleasantly surprised to see the shuttle bus lines relatively quiet and we were able to pass through security quickly and hop on a school bus (that’s right, it was a school bus for the 20-minute shuttle ride to Hazeltine!) before heading to the golf course.

The moment we entered the grounds at Hazeltine, we immediately felt the buzz of the Ryder Cup atmosphere. As I mentioned, it’s completely different to any other golf event around the world with patriotic fans dressed the part and showing their support for their team.

Walking around and focusing on fans dressed as Abraham Lincoln, George Washington, and Dumb and Dumber is certainly a memorable experience.

For those less interested in the action inside the ropes, you could certainly spend your time having fun identifying your favorite dress. 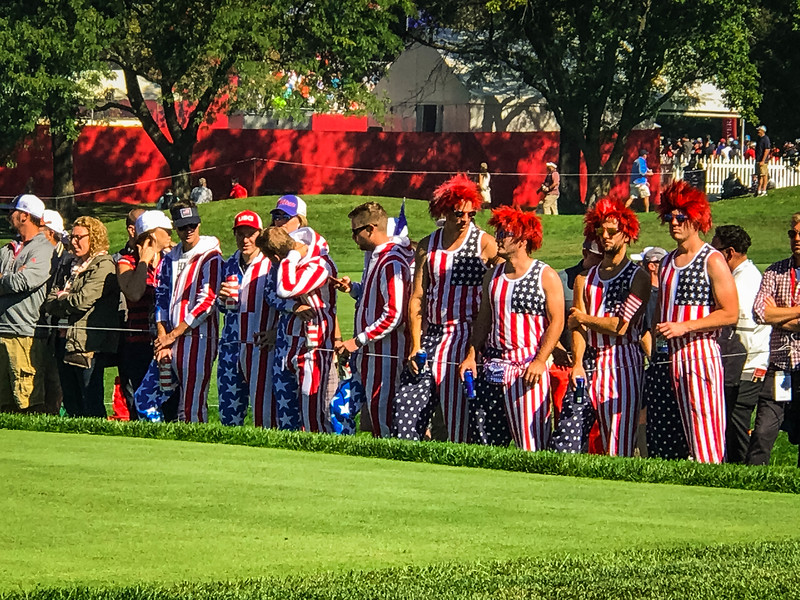 Roars echoed throughout Hazeltine and it was intensified even more with only four matches taking place. Imagine 60,000+ fans packed into four holes and that’s the type of atmosphere created for the players honored to represent both teams. 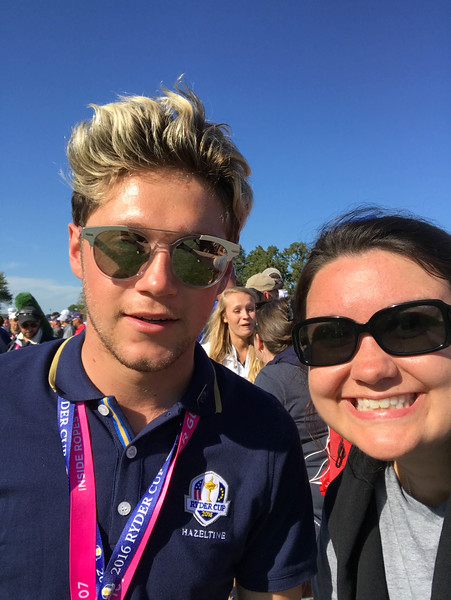 Heather’s claim to fame saw her moment in the spotlight when she captured a selfie with former One Direction star, Niall Horan.

We spent the morning session behind the 17th tee hoping that the matches would reach this hole. We were disappointed to hear that the first match ended on the 16th with Europe’s dynamic duo of Rory McIlory and debutant Thomas Pieters defeating the flamboyant American pair of Phil Mickelson and Rickie Fowler. 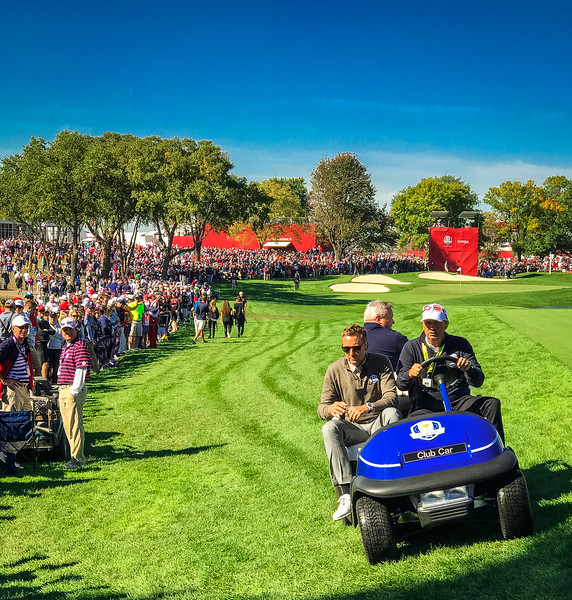 The second match quickly followed suit and we were left wondering if our choice to wait on 17 was going to backfire.

Fortunately, the third match didn’t disappoint. Justin Rose and Chris Wood for Europe against Jimmy Walker and Zach Johnson. The atmosphere was electric and certainly pro-America but this didn’t stop Rose/Wood closing out the match after halving the 17th.

Only one match left and USA’s Jordan Spieth and Patrick Reed appeared to be in control against the Spanish pair of Sergio Garcia and Rafa Cabrera-Bello. A moment of magic on 17 by Cabrera-Bello when he chipped in from off the green helped them claim a half point. 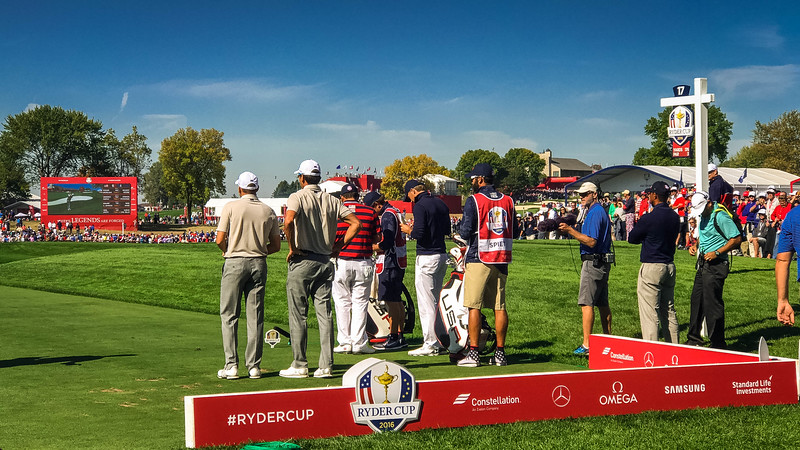 We spent the afternoon walking around the course and following several different matches. The best advice I can give anyone visiting the Ryder Cup is to get ahead of the groups and wait for them to come to you. With so many people crammed into a small space, it’s almost impossible to try and follow a group around.

The end of Saturday’s play saw the American team extend their lead to 9.5-6.5 and the European’s were left heading into Sunday’s singles action hoping for a recreation of the “Miracle at Medinah” in 2012! 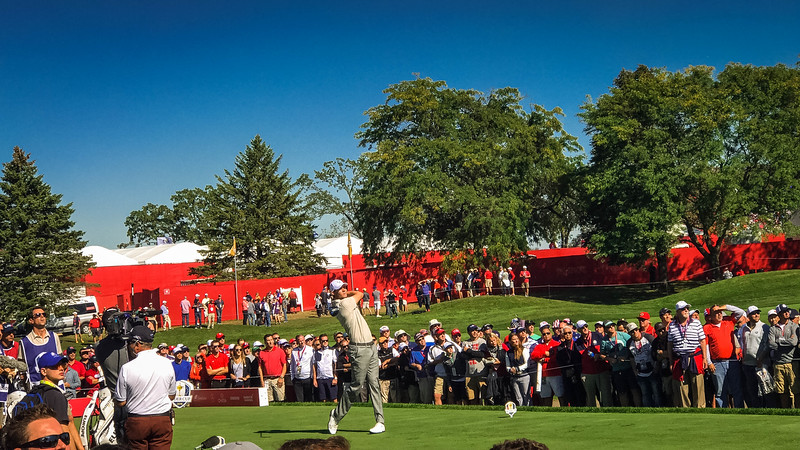 2012 saw an epic comeback by Jose Maria Olazabal’s European team and 2016 skipper, Darren Clarke, was hoping that his men would fight back in similar fashion.

Unfortunately, this never materialized and the Americans secured an impressive 17-11 victory to regain the Ryder Cup after three consecutive defeats dating back to their last victory in 2008. 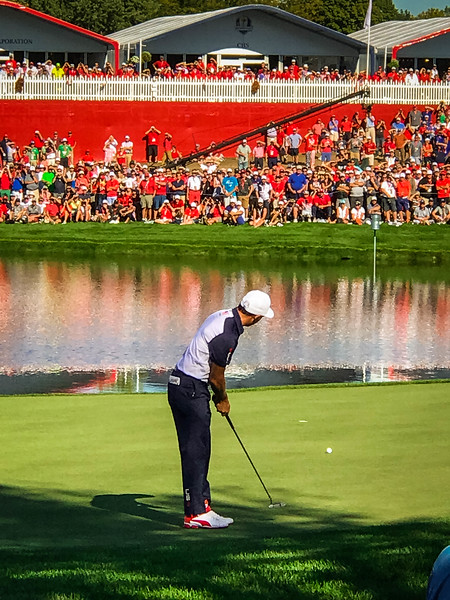 We were honored to watch the likes of Reed, McIlroy, Garcia and Mickelson put on amazing displays during the final day. There is always going to be a winner and a loser in this format but the way in which this match was played was an absolute credit to both teams. 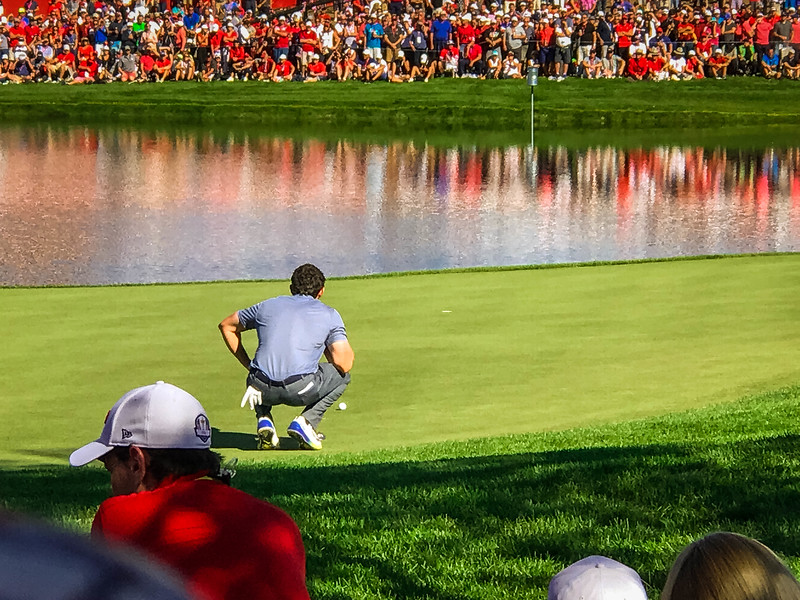 It was an incredible spectacle for everyone and again, we chose to stand behind the 17th green to watch the action.

It’s fair to say that the 2016 Ryder Cup tournament will be remembered as a tribute to Arnold Palmer as much as the American team securing victory at Hazeltine. The passion on show from both teams was evident as was the amazing atmosphere created by the fans that made their way from all corners of the globe to watch this amazing event. 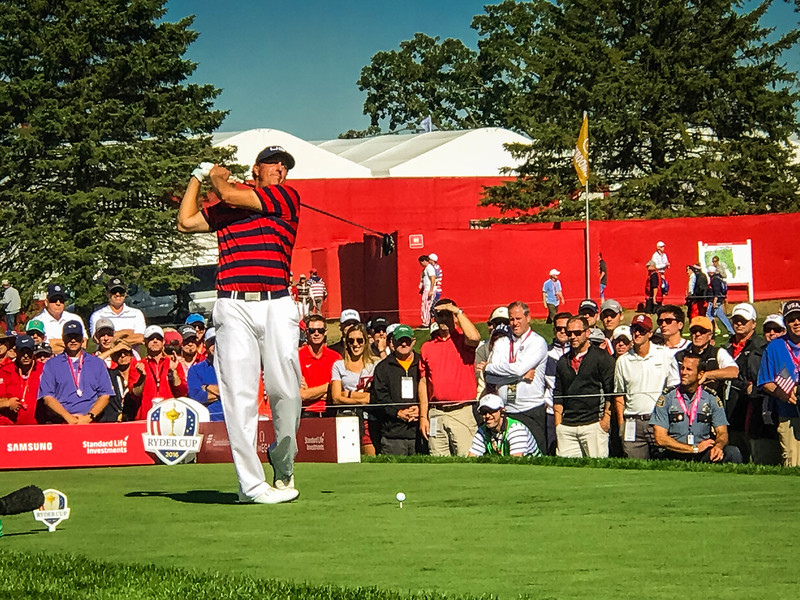 We were privileged to be present at our third Ryder Cup and regardless of the outcome, it was an amazing experience that we would encourage everyone to attend at least once. Even if you are not a huge golfing fan, this is more about the experience and enjoying the electric atmosphere created inside the grounds. 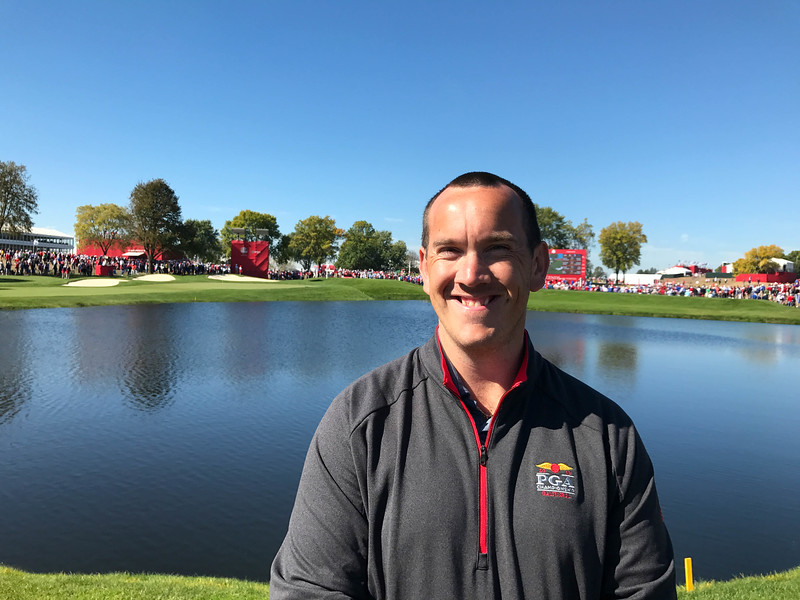 As a Brit, I have to say that I was disappointed with the outcome but given the previous two Ryder Cups we attended went in favor of the European team, I can’t be too disheartened.

Have you attended a Ryder Cup? Do you enjoy playing/watching golf? 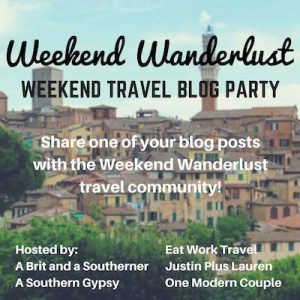 […] we had the opportunity to explore the Twin Cities and beyond during our recent visit for the 2016 Ryder Cup tournament at Hazeltine National. Beyond the beauty of this golf course, Minnesota is blessed to have a myriad […]

Absolutely stunning photos! I don't know much about golf world, but have played a few games with my partner who happens to be a massive fan. It's fantastic that you have been able to travel for three consecutive times to see the tournament all over the world! And I do agree with what Palmer suggests that the most rewarding experiences are those that you have to work for! It makes it so rewarding in the end. Thanks for introducing me something new!

My husband attended this year! And I went on a food tour of Minneapolis.