Who would have thought that an old, run-down Elizabethan house in the heart of Lancashire, England would now be situated along the banks of the James River in Richmond, Virginia? Agecroft Hall stands proudly and in many ways calmly in the heart of Virginia, though the steeped history that saw this Tudor residence moved was anything but calm. Added to this history the fact that I am originally from Lancashire, we were both excited about heading to Agecroft Hall to explore the present day grounds.

Despite the horrendous weather which clearly impacted the number of visitors on a cold, November day, we headed to Agecroft Hall with aspirations of learning more about the history of this historic hall. We were even treated to a private guided tour of the house which I have to say really added to the overall experience as we were able to learn more and ask as many questions as we wanted throughout the tour.

Pulling into the grounds of Agecroft Hall, the first thing you notice is the Tudor architecture on display on the exterior of the hall. The impressive design has been well maintained but only when you hear the full history of the hall will you appreciate the present day condition.

Agecroft Hall is the quintessential English home that was originally found in the heart of Lancashire. For those of you not familiar with English geography, Lancashire is located in North West England, not too far from the city of Manchester. Once located on the banks of the River Irwell in Pendlebury, the house was the distinguished home of the Langley and Dauntesey families. Dating back to the original construction in the late 15th Century, Agecroft Hall unfortunately dwindled both in condition and reputation towards the end of the 19th Century.

Agecroft was finally sold at auction in 1925 and Richmond native, Thomas C. Williams Jr. purchased this structure. Despite mass debates and discussions with Sir. Winston Churchill regarding the movement of an historic house across the pond, Agecroft Hall was dismantled and shipped all the way across the Atlantic Ocean to it’s new home at the present day location.

It’s crazy to think that a house the magnitude of Agecroft Hall could be broken down piece by piece at the start of the 20th Century and then shipped over 3,000 miles to the States and everything remain intact. An even more impressive feat was the stained glass windows that are now present within the main dining room traveled the distance without breaking.

After finishing reconstruction of Agecroft, Williams and his wife maintained the 15th and 16th century look of the hall with interior decorations and fine decor. Shortly after finalizing the look of the newly renovated hall, Mr. Williams passed away leaving this to his wife who remarried and they took over the reigns of Agecroft.

Mrs. Williams moved on from Agecroft in her later years but by doing so she fulfilled Mr. Williams wishes to turn this location into a museum for visitors to see how the original owners lived during the Tudor times.

By touring Agecroft Hall, you are taken back to true Elizabethan England as you pass through a variety of rooms and see all of the decor that stereotypes this time in English history. Much of the house remains as the original looked and any renovations and updates that have taken place have used materials and items that would have been present during this timeframe.

Our tour guide was extremely knowledgeable and provided detailed history throughout each room, along with painting a number of pictures in our minds as to daily life in the 15th and 16th centuries. I probably should have known much more than I did as our guide was reciting an abundance of information, but it was certainly nice to learn more about the history of my home country especially when related to a Lancashire residence not far from where I grew up.

Visiting Agecroft in November meant that the house was decorated for the holiday season and one room that I was particularly fascinate by was the library which was the only room that was left in the same condition with all the same decor as when Mrs. Williams left this to the museum. The library was decorated with a full Christmas tree and really provided a relaxing atmosphere with the old radio playing seasonal jingles in the background.

Another cool feature which was recently added to Agecroft by the Museum Trust was a “priest hole” which apparently was a common feature of most Catholic houses during this time period. Without giving too much away, don’t ever forget to check behind book cases because you never know what may be hiding behind them!

After leaving the house, it’s possible to take a tour of the gardens and take a look inside the current day gift shop that provides a selection of memorabilia to remind you of your time at Agecroft Hall. Due to the weather and time of year, we didn’t spend too much time outside and really were not able to explore the apparently gorgeous gardens.

Unfortunately photographs were not permitted throughout the house so you are going to have either take our word for it that this is a really cool experience, or even better take a trip to Richmond, Virginia and explore Agecroft Hall yourselves!

I am glad that we took time to explore this historical landmark as I am sure to many people this will be a missed attraction simply because the history of this place most folks cannot directly relate to. However, this is a great spot to learn about English heritage so take a trip and embrace the architectural genius that led to the reconstruction of this site.

Disclaimer – We would like to thank Visit Richmond for providing us with a media pass to visit Agecroft Hall. The content of this post are solely our personal opinions/experiences and we were not financially compensated for this post. 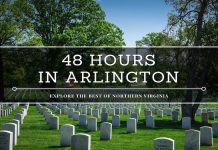 48 Hours in Arlington – Enjoy the Best of Northern Virginia 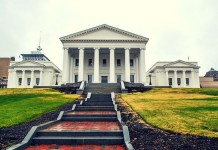 Why Visit the Historic City of Richmond Virginia?