Going back in time to my grandparents and even my great-grandparents, watching baseball was the best pastime you could ask for. Living in Arkansas, it’s all about the St. Louis Cardinals! From Ozzie Smith to Mark McGwire, the long list of memories on a baseball diamond has been passed down for generations and what better way to enjoy this history than by spending a day with the Cardinals.

It’s hard to imagine life without watching the Cardinals at Busch Stadium and having the opportunity to see some of the iconic legends in St. Louis is something that every Cardinal fan dreams of.

Whether you are a youngster getting ready to watch your first game or a lifelong fan that returns every year with the hope of seeing their beloved Cardinals reach the World Series, there is nothing quite like experiencing the action in person.

Fast forward to a recent trip that I took to St. Louis when I spent a memorable day watching history with many other Cardinal fans. With my girls by my side, we intended on making this the perfect weekend getaway and what better way to start this than by watching the St. Louis Cardinals.

Why not join us as we make our way to the “diamond” and find out exactly why they say “Diamonds Are a Girl’s Best Friend!”

A Day with the Cardinals

It doesn’t have to be a meet and greet with the players to spend a day with the Cardinals. The St.Louis Cardinals does not just represent the 40 plus players or those tied to the organization.

This team is about every fan, every worker, every supporter in and out of St.Louis. We met a couple of Uber drivers that spoke about how much fun it is to share a few minutes with fans and hear the stories about what brought them to Busch Stadium and the city of St.Louis.

We also met a security officer outside the stadium, I call him a security officer because his job and I quote “is to get you off the streets and into the stadium safely, because you paid for a ticket inside not out on my streets.” We found this hilarious because he was taking a prime opportunity to get to know the fans and make sure that in the hot and humid weather everyone still had a great experience. It was the epitome of the Cardinal friendliness that you find from everyone associated with this franchise.

Once inside the stadium, we navigated to our seats but first, of course, beer! We stopped by a stand closest to our section to find a lovely, sweet lady whose name was so close to my late grandmother, who loved her Cardinals, we thought it was identical. We took that as a sign she was there with us and she was ready to see the first pitch. 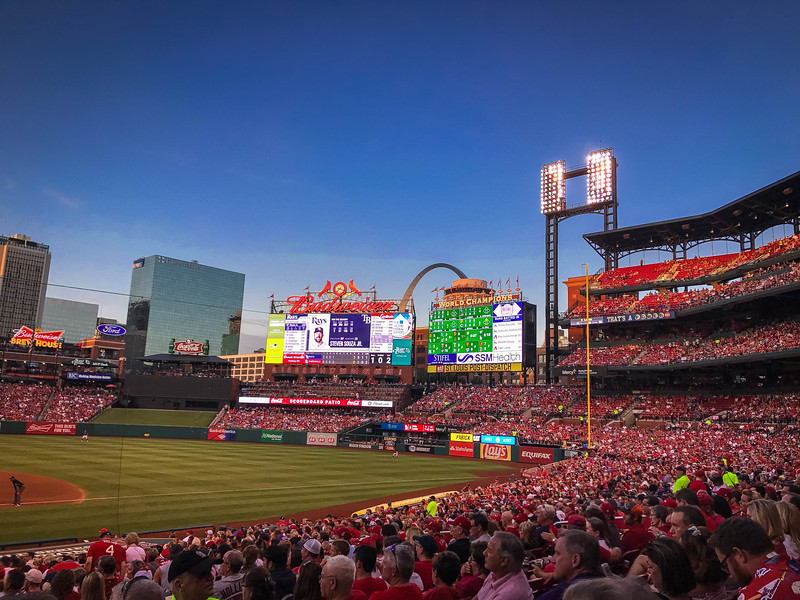 The Cardinals were still fighting for their lives to try and clinch a playoff spot and with a game against the Tampa Bay Rays, this was another opportunity to try and bridge the gap with their arch enemies, the Chicago Cubs.

After finally making our way to our seats, we found ourselves sat next to a couple who were clearly very passionate Cardinal fans! They apparently had worn the same outfit to every game they attended because it was the luck the Cardinals needed to pull out the win. We chatted with them most of the night, yelled at the umpire when needed, and celebrated runs together. 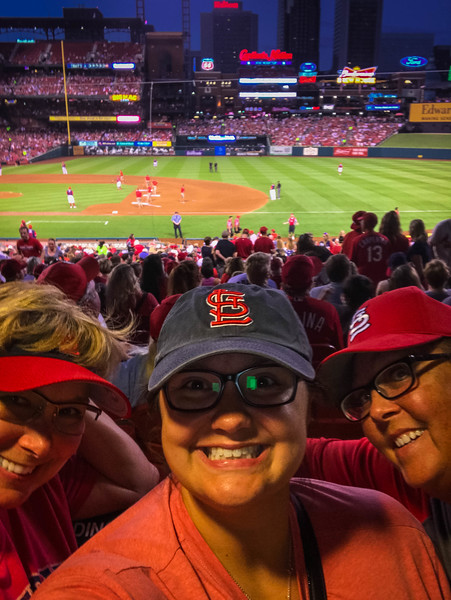 To our surprise, the weekend we were there was the induction of three more players into the Hall of Fame for the St.Cardinals. We were able to see the Cardinals honor Tim McCarver, Pepper Martin and Mark McGwire who are the 2017 induction class before the game started. A few other Hall of Famers joined them on the field including Chris Carpenter, Ozzie Smith, and Tony La Russa to name a few. 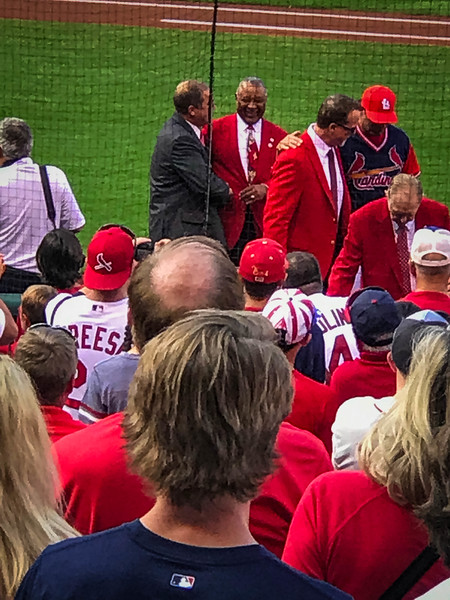 To this day I remember watching McGwire hit his many home runs and listen to stories of those before watching the great Ozzie Smith. Regardless of your age, you cannot help but feel a sense of pride when you watch these legends honored at the home of the St. Louis Cardinals. Being a Cardinal fan does not mean that you only support the Redbirds, but it means that you support the legacy of St. Louis as well as the organization and fellow fans.

Spending the day in Cardinal nation is definitely something that if you are in the area everyone should experience.

Busch Village Park is located right across from Busch Stadium and you can visit the Brew House or any other of there 6 restaurant options if you are there during an event. It’s fair to say, they do not disappoint and they are the ideal spot to grab a bite to eat before or after the ball game.

For this girlfriends getaway, we focused on spending some time to shop and try new restaurants but the highlight of this trip was attending the game. The St. Louis Cardinals may not be every baseball fans favorite team but I would argue that they are possibly the friendliest.

Everything from the security guard to the Uber drive to the experience inside the stadium was more than we could have wished for. As we made the decision to head back home from our amazing St. Louis adventure, we all came to a mutual agreement that “Diamond’s are a Girls Best Friend” and I am talking about a baseball diamond rather than the stereotypical association we have with this phrase!

Disclaimer – We would like to thank Explore St. Louis for providing us with complimentary tickets in exchange for consideration of a blog post review. These are solely our personal opinions/experiences and we were not financially compensated for this post.