Did you know that one of England’s iconic artists spent much of his time along the Fylde Coast in Knott End, Lancashire? Laurence Stephen Lowry, commonly known as L.S. Lowry, is one of England’s modern day artists as much of his work was completed during a 40 year period leading to his death in 1976. Although the town of Knott End frequently lies in the shadow of the popular tourist hotspot of Blackpool along the Fylde Coast, for anyone interested in taking a look at what inspired much of Lowry’s work, a visit to this village is certainly worthwhile.

Lowry was a proud “northerner” and focused much of his attention on highlighting daily life in north-west England through his paintings. His distinctive style of painting urban, industrial landscapes with human figures often referred to as “matchstick men” is what makes Lowry such a unique artist. Let’s take a look at why Knott End was a popular spot for Lowry and what visitors can enjoy today along this stretch of the Wyre estuary.

Although the full name for Knott End is actually “Knott End-on-Sea,” it’s the shortened version that locals and visitors alike use. Located on the southern side of Morecambe Bay, this village is part of the civil parish of Preesall, just a few minutes along the banks of the Wyre estuary. 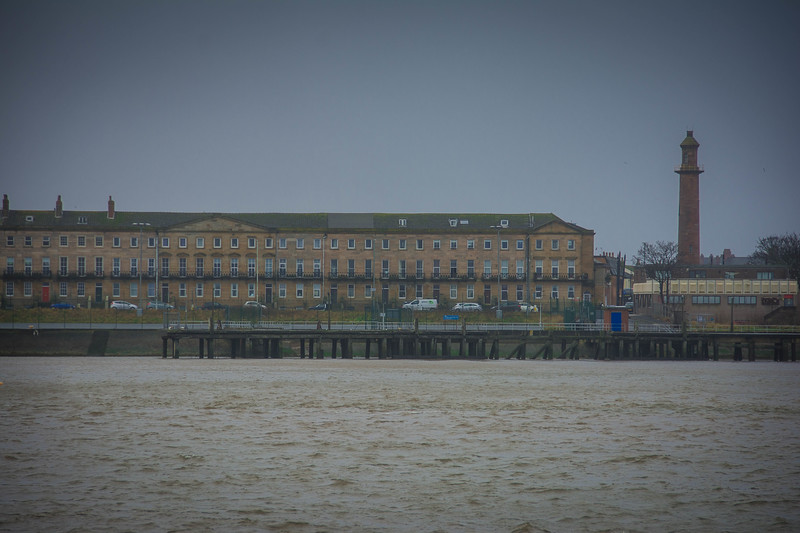 Interested in visiting Knott End? You have three options available to you.

The first thing you notice as you arrive in Knott End is that it’s a relatively small town. With only a small number of shops, restaurants and things to do, it’s likely that you won’t need to spend more than a couple of hours here. 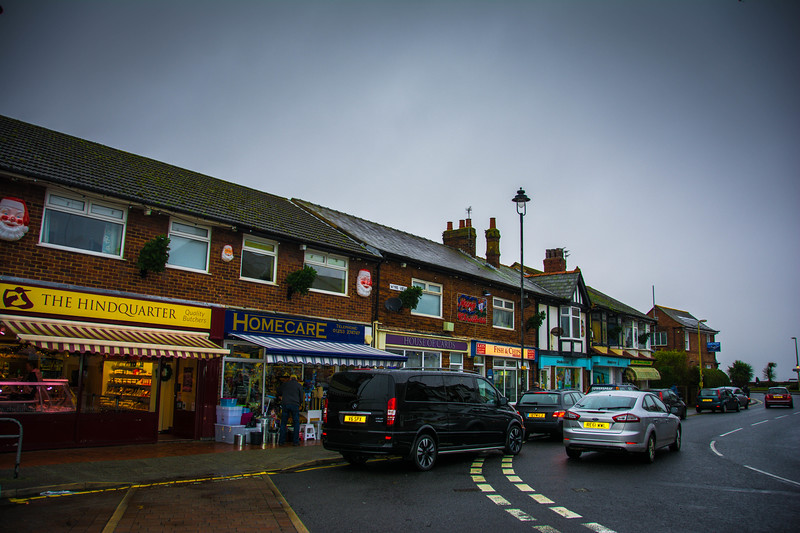 It’s one of those places that is worth visiting to take a stroll along the banks of the Wyre estuary to admire the scenery but you will probably want to use this as an opportunity to visit some of the other iconic towns along the Fylde Coast.

In 2015, the village of Knott End commemorated the life and works of L.S. Lowry by unveiling a statue of the iconic artist along the seafront, directly in front of the spot where visitors can board the ferry to cross the River Wyre to Fleetwood. Lowry’s painting, “The Jetty at Knott End, near Fleetwood” depicts the view that you can see as you look across the estuary and it’s a tribute to his ties to the village that this statue was erected. 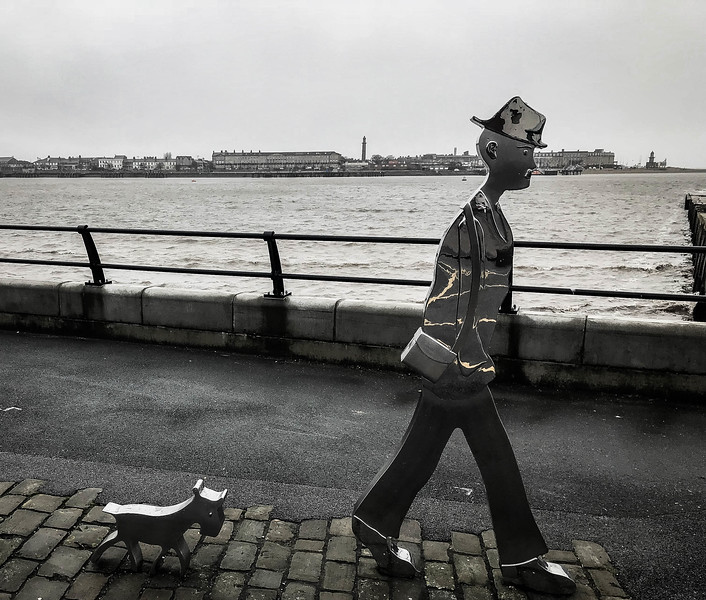 The statue portrays a matchstick man and dog, stereotypically reflecting Lowry’s association with the village and how he would always have his dog by his side when creating his distinctive masterpieces.

It was on this exact spot where Lowry was known to sketch many of his iconic paintings and drawings. The Lancashire artist frequently visited Knott End during the 1940s and 1950s and painted a number of seafront scenes illustrating the Fleetwood ferry and people waiting on the jetty.

Celebrating Lowry’s links to Knott End is a means of attracting more visitors to the area and the sculpture will hopefully help put the village on the map. (Mayor of Preesall, Councillor Philip Orme)

Lowry’s association with the Fylde Coast area expanded beyond Knott End and the Wyre Estuary. As a youngster, he would frequently visit Lytham St. Annes for family holidays and in his later years he visited the same area simply because of his fond desire to admire the gorgeous scenery across the Irish Sea and beyond.

Take a Stroll Along the River Wyre

After spending a few minutes learning about Lowry’s legacy and his desire to paint the scenic views across the estuary, visitors to Knott End should take a stroll to not only enjoy more of the beautiful scenery but also take in the sea air that epitomizes this stretch of North-West England coastline.

Whether you choose to head inland on the public footpath that crosses Knott End Golf Club or perhaps continue along the banks of the Wyre towards Hambleton, there are several options available. 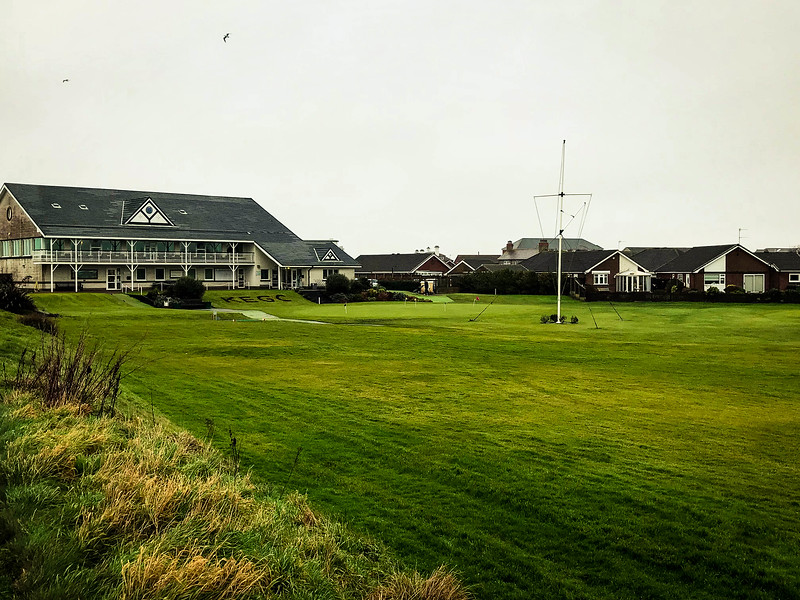 The moment you arrive in Knott End, the natural elements will likely welcome you, in particular the strong winds that frequently torment this stretch of the Fylde Coast off the Irish Sea. Don’t let that stop you from taking a short walk to enjoy the village and engulf the sea breeze!

Although Knott End is relatively small, there is no shortage of dining options available to visitors. Enjoy some of the best local fish and chips at the local “chippy” (aka Knott End Chippy), sample a little international cuisine at Cumin Indian Restaurant and Takeaway or perhaps sit down to a homemade style meal at Knott End Cafe.

The history of Knott End Cafe dates back to the mid-20th century. The family run business has been open since 1946 when the cafe was still part of the railway station, built in 1908 as part of the Garstang and Knott End Railway.

A range of menu options are available, so regardless of whether you are looking for something light such as a soup or sandwich or perhaps something with a little more substance (e.g. burger, fish and chips etc.), you can be assured that there will be something on the menu that will satisfy your tastebuds.

The beauty of exploring England outside of London is that you can stumble across hidden gems such as Knott End in the North-West. There are countless places scattered across the English landscape that are frequently ignored but as you can see, there is a rich history behind many of them that warrant visiting.

The history of Knott End may be enhanced by its association with LS Lowry but it’s still a place that anyone that loves the outdoors will enjoy. There is nothing quite like taking an afternoon stroll along the coastline and enjoying the constant sea breeze that typifies this area.

After spending a few hours here, it’s easy to see why Lowry found this to be a safe haven to paint many of his masterpieces. Perhaps you will find some inspiration to produce something similar on your next trip to the Fylde Coast.

Tempus is Fugit-ing – The Travelling Hamster

It's definitely a hidden gem Tanja and probably not somewhere that most people would consider visiting. However, the Fylde Coast, in general, is a beautiful part of England and I would encourage everyone to consider exploring this when they next visit the UK.

I prefer getting out of the city and doing small town travel. Now I've learned about a new area - and a new to me artist. Very cool.

Cheers Jill, glad that we were able to introduce you to a new spot! Stumbling across places like Knott End is always a rewarding experience especially when there are such great stories surrounding them.

You are correct that there are many beautiful places outside of London. We were in Lancaster, England a few years ago and it was absolutely gorgeous! Great post!

Hi Cynthia, yes it's so true that getting outside of London is what everyone visiting the UK should aim to do! We always hear that London has the top tourist spots but look at how much beauty is outside of the capital. Glad to hear you visited Lancaster, it's not far at all from Knott End. We took a day trip to Lancaster ourselves and I will be writing about our experience there shortly also :) Thanks so much for your kind comments!

A good descriptive piece about the famous "matchstick men" painter , and wonderful pictures depicting the simple beauty of this little known haven of peace.we usually visit every two weeks and can highly recommend this little place for a nice bracing walk and a bite to eat at the Knot End Cafe which has delicious home made food at reasonable prices.