Home Illinois How to Get from Midway to O’Hare Airport with No Hassle?

Have you experienced the disappointment of finding an awesome deal on a flight only to find out it is to an alternative airport to the one you were planning on flying into? Flying into Chicago frequently offers such problems as the Windy City is home to two major airports – Midway and O’Hare. If you have a connecting flight in the ‘other’ airport, it’s plausible that you will need to travel between the two which is sometimes more difficult than it should be. We want to share a few of our top tips on how to get from Midway to O’Hare in the shortest and most efficient way possible!

Travel bloggers like us are always looking to find great deals on flights and will go to extremes to book different flight legs to maximize discounts that may be available. As we planned our epic round the world trip, our starting city was Chicago, primarily because flights from there were much cheaper than out of Memphis. However, the most economical airline to fly from Memphis to Chicago is Southwest but of course, they only offer flights into Midway.

Let’s take a look at how you can easily connect between the two airports.

How to Get From Midway to O’Hare

The best way to get from Midway to O’Hare is to use the CTA rail system. It’s efficient, it’s cheap and most importantly, it’s easy to navigate as long as you follow a couple of simple steps to ensure you alight at the correct stops.

This is the transportation we have used a couple of times and one that we used recently. We will discuss this in more detail later.

According to the TaxiFareFinder website, you can expect to spend over $72 to travel between Midway and O’Hare. The trip distance is 28 miles with an anticipated time of around 48 minutes. This may be the quickest of all transportation methods but I doubt is the most cost-effective.

If you have a large party traveling with you, perhaps this will be the best alternative as you can split the cost but if you are traveling alone or with only your partner, it can be an expensive option.

A simple alternative to a traditional taxi would be to take an Uber between the two airports. The online Uber estimatorsuggests that you will pay around $40 to travel the same distance but clearly this is a more affordable option if you are looking for a convenient option.

It may sound like a crazy idea but renting a car is another option to get between the two airports. For around $40, you have the flexibility of taking the short drive while perhaps contemplating paying a visit to your favorite restaurant in between. This is certainly a more viable option than I’m sure many of you would consider.

$5…that’s how much it costs to get from Midway to O’Hare using the CTA Rail System. Let me repeat that, FIVE DOLLARS (when I initially wrote this post it was actually only $3 each way!!!). Forget all of the other options that you might think are convenient and keep reading to find out exactly how easy it is to get between the two Chicago airports using this method.

The directions I am going to provide are to take you from Chicago Midway to Chicago O’Hare but just follow these in the opposite direction if you are heading the other way.

Follow directions at Chicago Midway to ‘Trains to City’. You will be taken on a short walk to the CTA station and this will take about 10 minutes from pretty much any gate at Midway.

Purchase a single-ride ticket for only $5 and this is the only ticket you will need for the journey!

Take ANY train heading towards the city of Chicago.

The journey from Midway to Clark station will take approximately 30 minutes on the ORANGE line but be sure to keep an eye out for this station because it’s critical that you alight here to take another train.

At Clark, you will be transferring from the ORANGE to the BLUE line.

Be prepared to experience some of Chicago’s winter conditions but don’t worry, you won’t be outside in the elements for long at Clark/Lake as you will soon be boaring your next train to O’Hare Airport.

Travel along the blue line for about 35-40 minutes until you arrive at O’Hare International Airport.

Once you arrive at the airport station, you will need to determine whether you are flying from the domestic or international terminal and take the short walk to the appropriate location.

For those leaving the country, you will be required to hop on the O’Hare Airport Transit System to take you to terminal 5 but the airport has plenty of signs to point you in the right direction.

Traveling from one side of a city to another can seem like a daunting task especially if you are visiting somewhere like Chicago for the first time. However, hopefully after following our 3 step guide on how to get from Midway to O’Hare, you will soon become resident experts in making this simple journey without a hassle.

For only $5 per person, you would be crazy to choose any alternative method though I certainly understand some people prefer the convenience and simplicity of a taxi or Uber to take you from one spot to another.

We will be sharing some other guides in the near future of other cities around the world that have multiple major airports because we really think this is something that many travelers struggle to find useful information on. This opens a gateway to many different flight options and it’s feasible that you will dramatically cut the costs of your airfares by being flexible enough to connect between multiple airports.

Have you flown into one airport and then flown out of another within the same city? Would you consider taking this approach if you knew you could save a substantial amount on your travel costs? 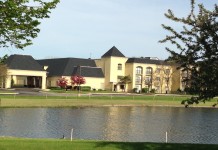