Street art is increasingly becoming the number one way to regenerate and transform a neighborhood and this is certainly the case in a destination like Oklahoma City. During our recent weekend getaway to OKC, we quickly decided that heading out with our friend Ashley from A Southern Gypsy to explore the best street art in Oklahoma City was an experience we couldn’t miss out on.

We have quickly fallen in love with street art examples around the world and honestly, this is one of the first areas of research we look into before visiting a new destination for the first time. Although there is still a clear divide between those that argue street art is no more than harmful graffiti and those that love this modern form of art, there is certainly no argument against the fact that street art done well can produce a creative masterpiece.

When we first started exploring street art, we specifically researched this in the context of “street art vs graffiti”. What exactly is the difference between the two and where do you draw the line? The more street art you experience, the more you will appreciate the unique differences between the two. 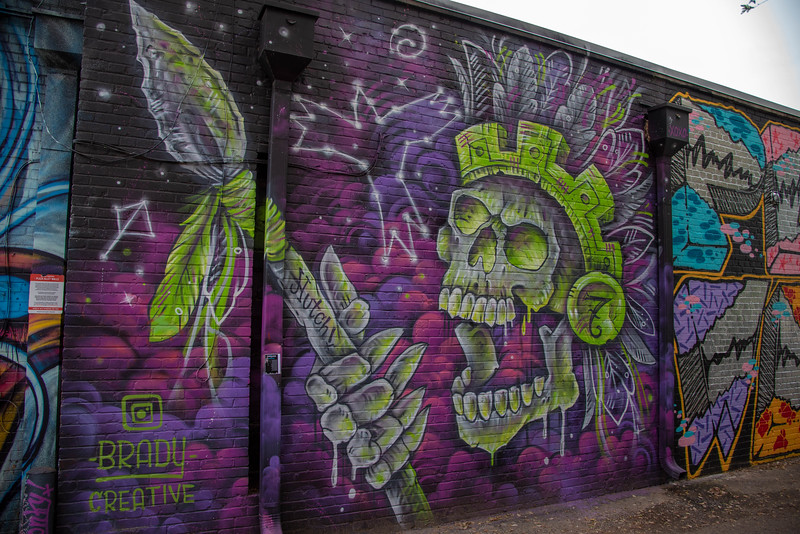 In my opinion, graffiti equals vandalism and no intent on urban regeneration. On the other hand, street art is about telling a story through the depiction of urban art.

What street art thrives in the area? Which global artists have decided to leave their mark on the city? What style resonates with locals and visitors alike in the location? All of these are questions that everyone should ask before venturing out and exploring what is out there. This is certainly true before experiencing the best murals across Oklahoma City and it’s fair to say, this city is not short of awesome masterpieces!

As you head out to explore the diverse neighborhoods in Oklahoma City, you will quickly understand why doing a little research ahead of time is a good idea. There is A LOT of street art in OKC but with some careful planning, you can ensure that you capture the best murals during your tour of the city.

Oklahoma City epitomizes this “modern city” vibe that we have started to see across many cities, particularly in the United States. Utilizing street art as a mechanism to promote neighborhoods, drive tourism to the city, expand economic development in areas and regenerate locales that perhaps needed a little ‘TLC’ is definitely something that Oklahoma City has achieved.

Let’s take a look at some of the finest examples of street art around Oklahoma City and as with any location, it’s a constantly changing landscape and we would appreciate any comments below as you stumble across new murals across the city.

Although some of the murals around Oklahoma City can be a little tricky to find, that is certainly not the case around Automobile Alley. This neighborhood epitomizes the transformation that Oklahoma City has seen in recent decades and is at the forefront of further regeneration in the near future. Visitors can enjoy an eclectic blend of restaurants, bars, local boutique stores and of course, amazing street art!

The aptly named building “The Womb” is a vibrant display of colors with a myriad of eye-catching designs on both sides.

Take a stroll across the street and admire more spectacular designs. From the innovative artistry to the plethora of creative masterpieces, Automobile Alley isn’t short of murals waiting to be discovered. 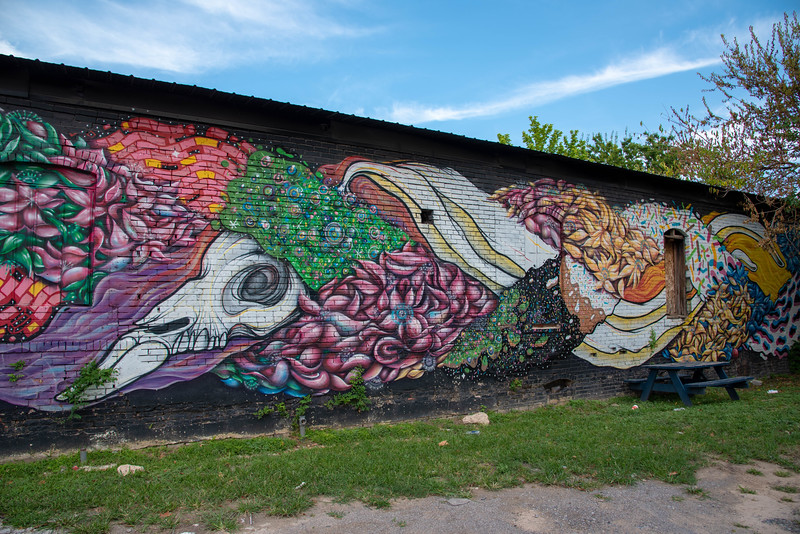 The Plaza District is undoubtedly the highlight neighborhood for street art in Oklahoma City. The Plaza Walls project is the focal point of this trendy, vibrant neighborhood and is such a popular spot that even Google has sponsored this particular project.

As you stroll around the back alleys admiring the majestic artistry, you can certainly see why Google collaborated with the artists here. 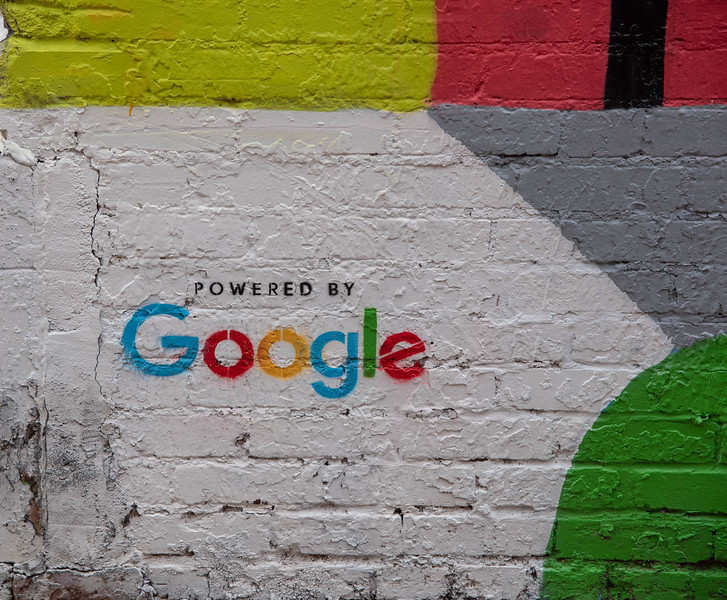 The Plaza Walls are an ever-changing landscape so dependent on when you visit will likely determine exactly which “works of art” will be on display. One thing is for sure, the artists participating in this project are some of the best around Oklahoma City, so you will have an amazing experience regardless of the murals available. 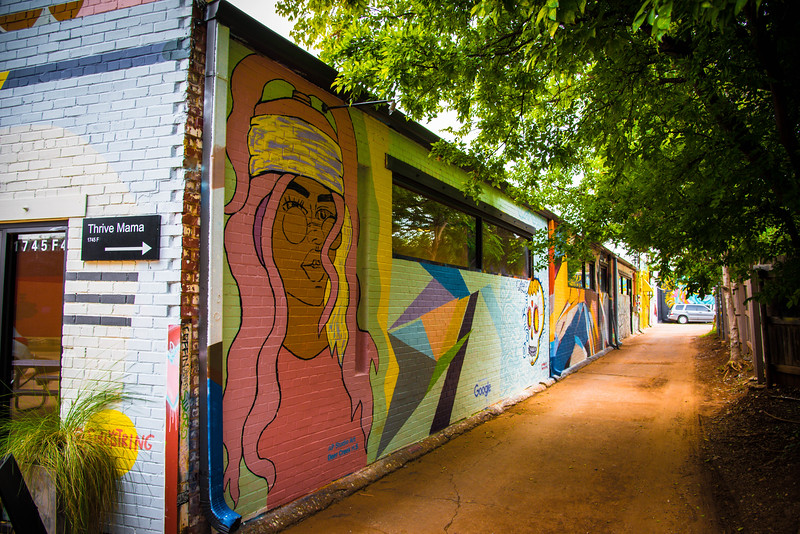 Launched in September 2015, the Plaza Walls project was developed courtesy of The Oklahoma Mural Syndicate in an effort to provide a creative space for spontaneous street art. The lead curator in developing these creative masterpieces is Kristopher Kanaly and it’s thanks to his endeavors that has enabled this neighborhood to grow and thrive in recent years. 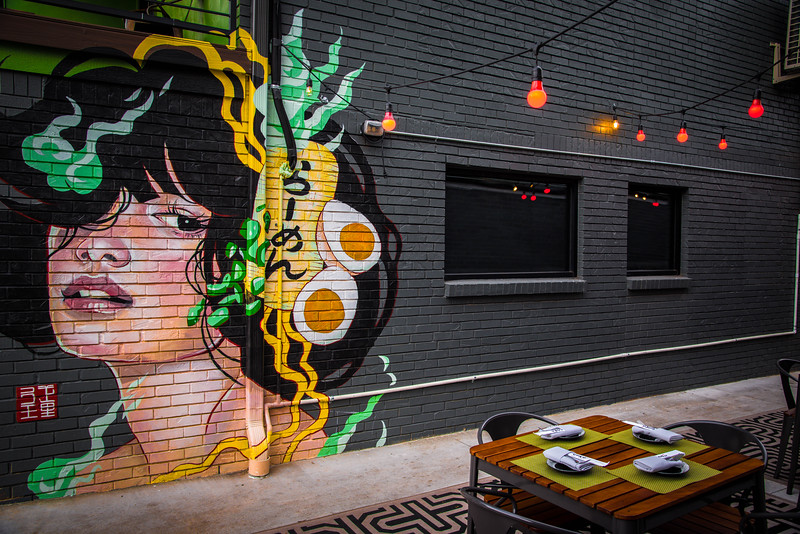 If you are an NBA fan or in particular, an Oklahoma City Thunder fan, you will immediately recognize the New Zealander portrayed on this gigantic mural located in the heart of downtown OKC!

Steven Adams’ career in Oklahoma City dates back to 2013 when this feisty character started wearing the Thunder colors. His personality on and off the basketball court quickly made Adams a fan favorite not only in Oklahoma City but across the NBA league.

Graham Hoete, an artist from New Zealand, was traveling around the United States when he visited Oklahoma City and spray painted this huge mural of Adams. Although his trip to the US was primarily focused on painting a tribute to Prince in Minneapolis, he had a personal desire to visit OKC to create this stunning masterpiece – it’s fair to say, he made quite the impression on the city!

Their whole family, bro, is huge inspirations. Role models. I thought man I gotta get to Oklahoma. Just to show some love, bro. I can’t go to the U.S. and not do one of the bro. (Graham Hoete)

This mural is one of many examples of street art in the Film Row neighborhood of Oklahoma City. 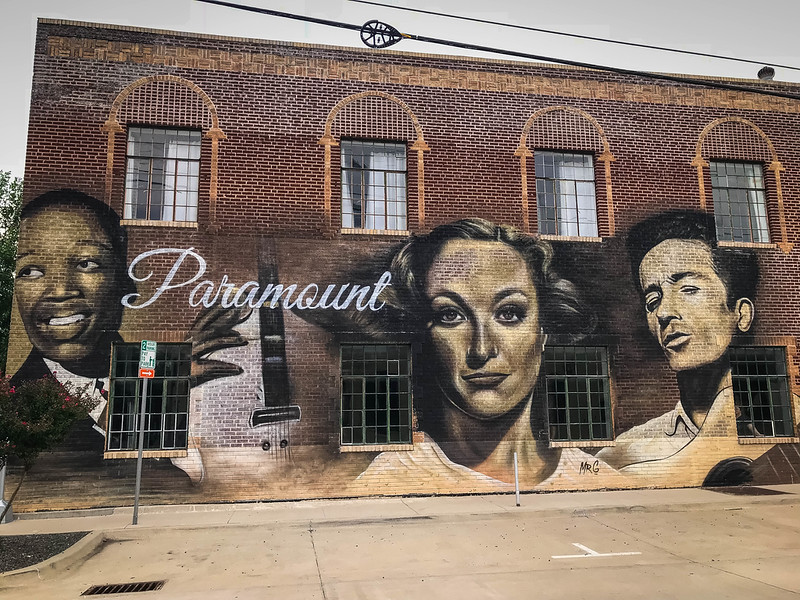 One of the hidden neighborhoods that we stumbled across that was scattered with amazing murals was Western Avenue.

Although our attention was focused on sampling some of the best coffee in Oklahoma City at spots like All About Cha and Stella Nova, we quickly realized that Western Avenue was a hotspot for artistic excellence.

We strongly recommend either planning your route along Western Avenue in search of the best murals, particularly if you are utilizing Uber or public transportation because this is a long stretch covering several miles which makes it critical that you look in the right spots.

There are so many unique examples of street art along Western Avenue, unlike anywhere else in the city which makes this one of the best neighborhoods that we highly recommend checking out, particularly if you have access to a car which makes it much easier to experience.

First-time visitors to Oklahoma City should certainly have the Bricktown neighborhood on their radar for many reasons. The awesome river cruise that meanders through the Bricktown district, the eclectic blend of local restaurants offering a variety of delicious menu options, the Oklahoma City Dodgers minor league baseball team and course, the street art!

Although the Bricktown area isn’t quite as blessed as some of the other spots for having an abundance of street art, there are still several examples that are worth visiting. Cruising along the river will give you the opportunity to admire some amazing work, while your tour guide may give you a detailed story on exactly how a university professor was able to craft the amazing design in such a short time.

The yellow centennial walls that run parallel to the canal offer more street art examples but just take a stroll or hop on the awesome rental bikes available from Spokies to explore the rest of the Bricktown neighborhood…you never know what hidden gem you will stumble across next because new murals are popping up all the time!

Given the proximity to Automobile Alley, I really could have incorporated Midtown into that neighborhood but there are so many cool and unique murals that really justifies having this in its own category.

Head on over to the Bleu Garten open-air hub to enjoy a beer or two and sample some of the fine cuisine available at the food trucks.

As you are indulging, take a moment to admire the awesome murals that are on the side of the fencing around this area and then head across the street to enjoy some of OKC’s finest street art. 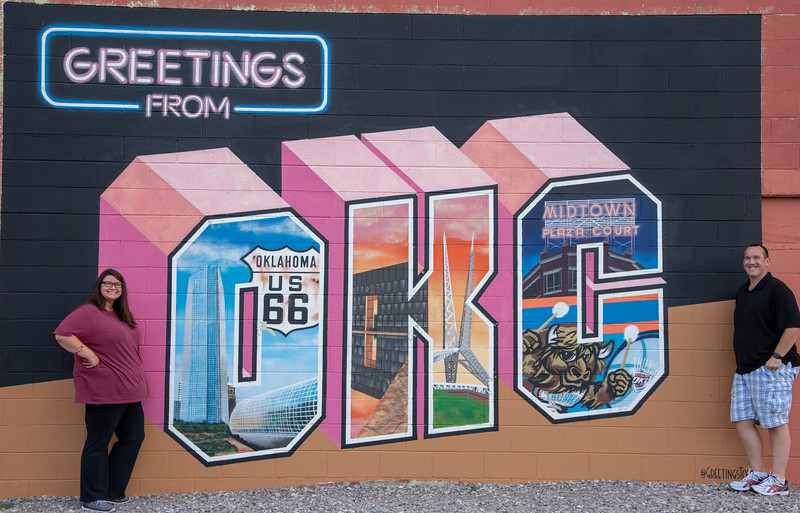 “Greetings from OKC” featuring Route 66 and the iconic Midtown Plaza sign is one of the best murals across the city and definitely one that you will frequently see promoting the city. 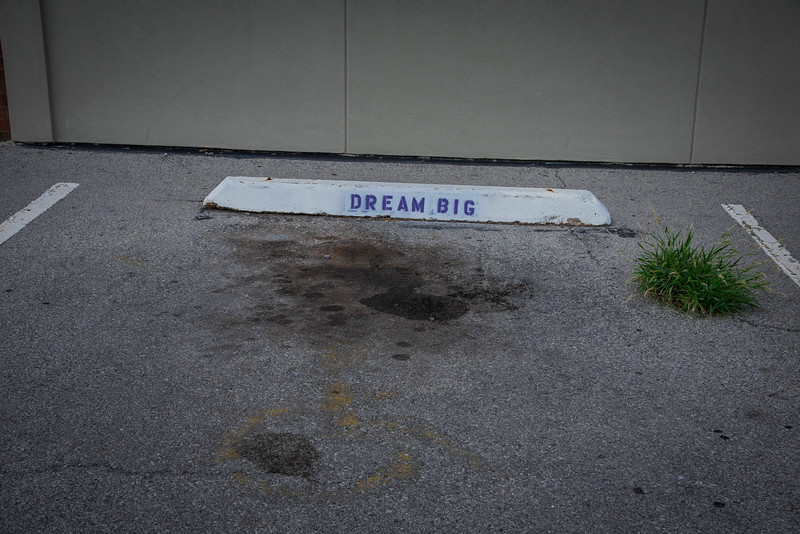 Ready for a bite to eat? Head over to Waffle Champion to sample the BEST breakfast, brunch or pretty much any meal you want but before heading inside, take some time to admire the iconic mural on the side of the building…

All you need is love and waffles

Regardless of your desire to satisfy your sweet tooth, the Midtown neighborhood epitomizes everything that we LOVE about Oklahoma City!

The more time we spend in Oklahoma City, the more it surprises us! There are so many cool things to see and experience that you would never associate with this city. 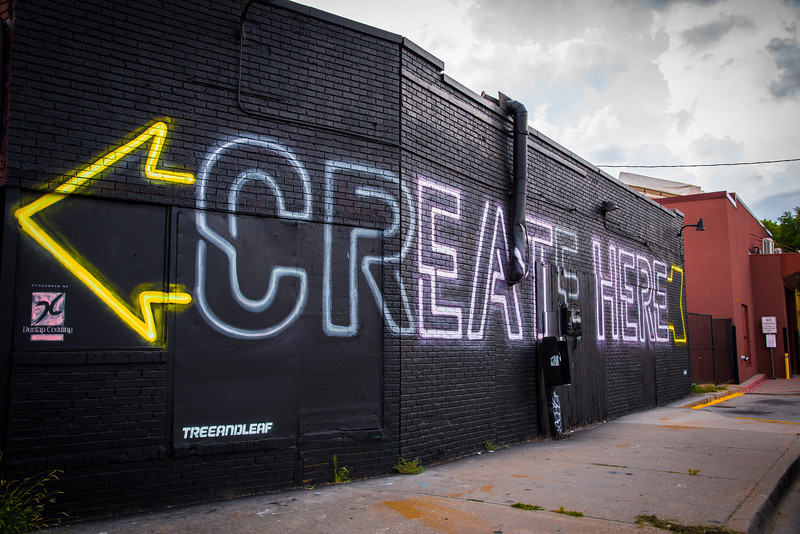 From the amazing coffee scene to the variety of trendy, urban neighborhoods, OKC is a city you cannot afford to ignore any longer. 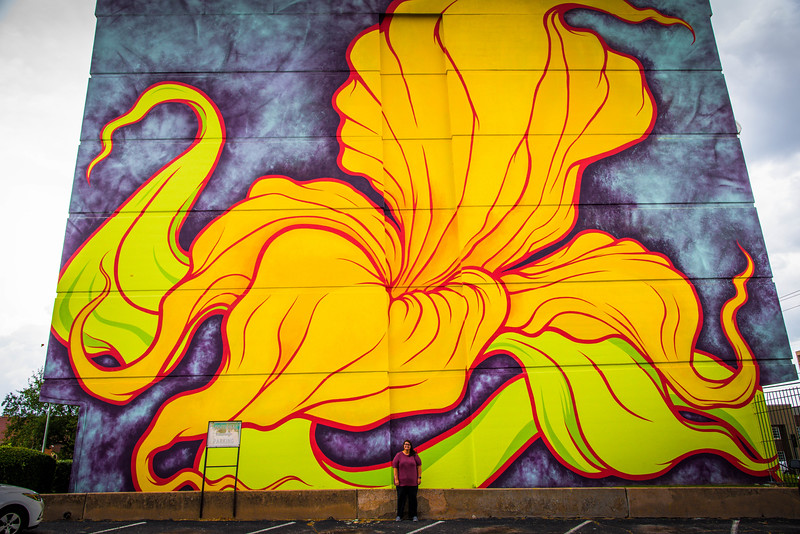 And then you have the street art…For those of you that love street art, this is a city you will quickly fall in love with. However, even if you have no desire to experience the concept of “street art”, we would argue that OKC is the ideal place to start with such a vibrant blend of murals that will surely entice you to explore more.

The beauty of Oklahoma City is that this is a city that offers way more than just street art if you have a fond interest in the arts and culture scene of a destination. We strongly recommend checking out this awesome post by our friends, Rob and Ann from TravelLatte, on the best places to see great art in Oklahoma City!

Do you love exploring street art? Which city would you recommend visiting to enjoy awesome street art?

I live here in Oklahoma City and recognize some of the murals. But now you've made me want to journey out is search of some of the amazing work depicted here. I am proud to watch the expansion of business and the arts leading the transformation of our city.

Lyn aka The Travelling Lindfields

What stunning street art. I don't understand how anyone can confuse such talented work with graffiti.

We love street art and it looks like Oklahoma City has some beautiful examples - I love the buffalo in the corn field! It’s always great to find out and plan before you go - we are off to Melbourne in a few weeks and I am already researching the street art and where to find it!