Wandering the streets of New York City is the catalyst for many visitors to explore the amazing sights and attractions. However, the main reasons for visiting the so-called Big Apple vary depending on your personal preference but I am convinced that most people experiencing New York City for the first time will likely want to see some of the symbolic landmarks there.

For those of you that have either never visited New York City (folks, if this refers to you, I urge you to book a flight to NYC as soon as possible because you are missing out!) or just haven’t experienced all of the key landmarks, here are our Top 10 Iconic Structures in New York City worth checking out.

During our recent visit, we decided to make our way from Penn Station to Central Park and from that point we made our way all the way through Manhattan taking in some of the world’s must lucrative and iconic structures.

The map below represents the locations of the 10 iconic structures in New York City that we visited! 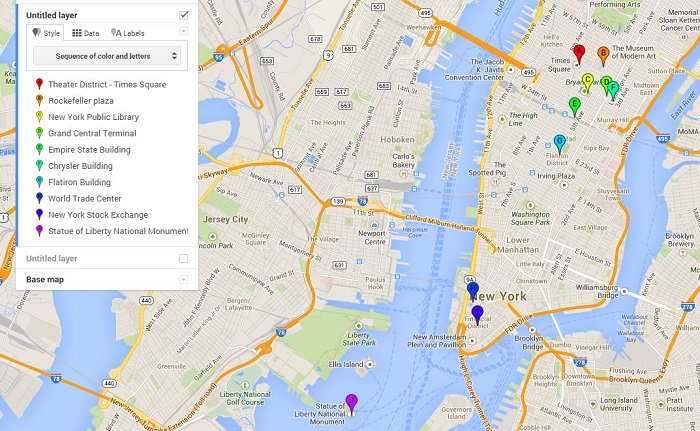 Let’s start out with the king of all attractions in New York City – Times Square, which in my opinion is the ultimate 24 hour spot of the world! Whether you are into the party scene, bar hopping or more of a theater fanatic, there is something here for everyone at all times during the day. 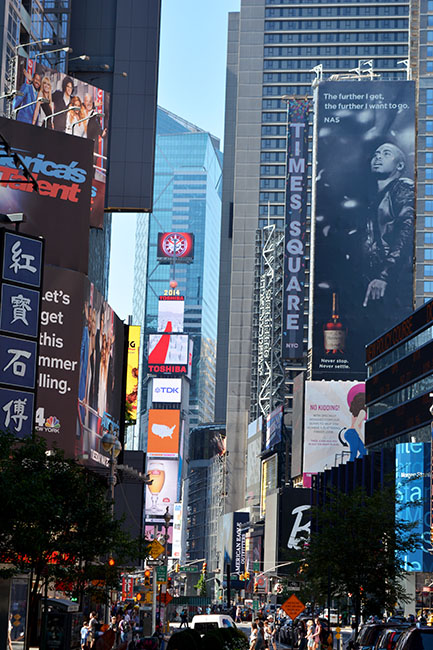 You may be asking ‘How is Times Square an iconic structure in New York City’? Well, just take a look at the picture and let me know if you are still saying that! When I think about Times Square, this is the image I have in my mind with large, glaring billboards advertising the latest and greatest Broadway plays or when the next live showing of Good Morning America will air.

All of the structures along Times Square are designed to fit the mood, atmosphere and ambience here, even the many Starbucks in this part of New York City have that feel about them!

Alongside the Empire State Building’s Observation Deck, it is one of the most frequently visited locations for breathtaking views of the New York City skyline and surrounding areas. 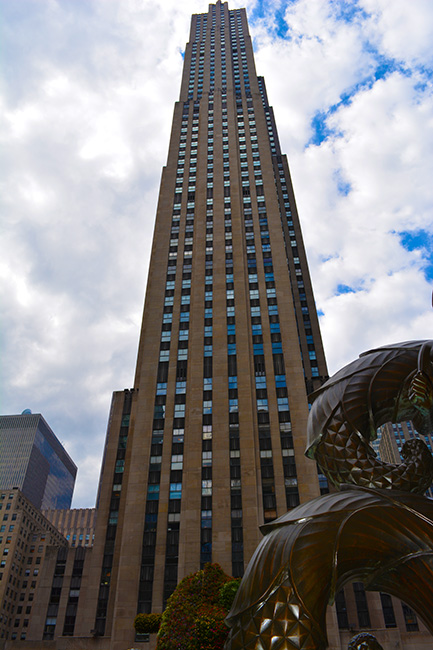 This landmark is also home to the Rockefeller Center Christmas Tree. Thousands and thousands of visitors flock here every year to see the lighting of the tree and with the ice skating rink in the plaza directly in front of the building, it is an iconic structure worth visiting.

Moving away from the modern day architectural design, one of the most iconic structures throughout Manhattan is the New York Public Library that dates back to the end of the 19th Century. I remember visiting here during my first trip to New York City several years ago, and one of our assignments was to conduct some research inside the Public Library. I have to admit that this was a treat in itself and I am not talking about the actual assignment! 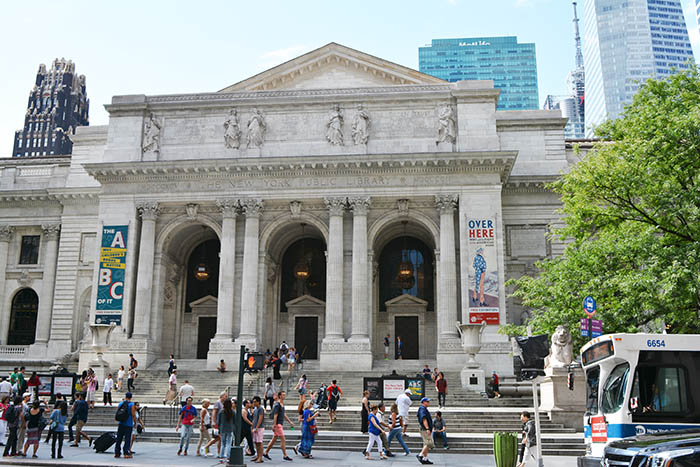 Studying in libraries may not be everyone’s favorite pastime, but when you step inside the doors of New York’s Public Library you may well be encouraged to grab a book just because of the gorgeous interior that matches the majestic exterior aesthetics.

What is the most famous train station in the world? I’m sure that many of you would say Grand Central Terminal in New York City. Dating back to 1871, not only does this provide New York with a historic landmark but it is also one of the busiest stations throughout the world. 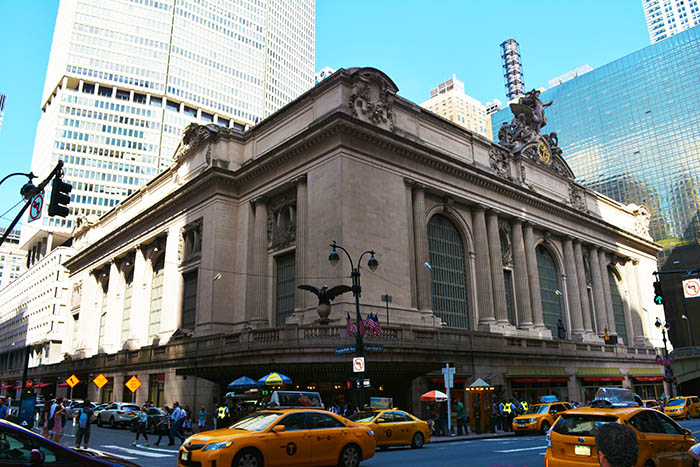 Undoubtedly a hub for tourists to stand in the main terminal and look in awe at the interior design, it is also a key commuter spot for locals to make their way around New York and beyond.

Once the tallest building in the world, the Empire State Building still stands proudly along New York City’s skyline and is a must-see structure for people visiting. I have visited New York City five times now and only on our last trip did I not take the trip to the summit of this symbolic building. 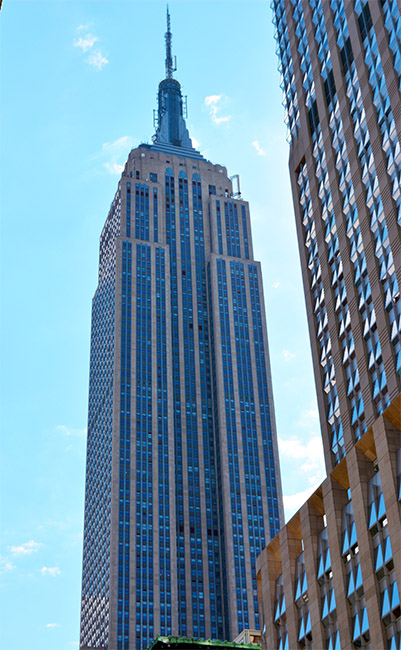 Standing at 1,250ft tall, it is still one of America’s tallest buildings and second to only the new One World Trade Center in New York City.

The Empire State Building is more than just a view. It’s an immersive experience inside a world famous landmark.

I love this quote taking directly from the Empire State Building’s website because I completely agree that each time you set foot in the building, you will likely see and experience something uniquely different when peering across the miles of New York City landscape. The views from the top are amazing and will definitely provide you with memories and images that you will cherish for years to come.

Did you know that the tallest building in the world for 11 months was the Chrysler Building in New York City? Ok, so we are talking about back in 1930-1931 but this is still one of the most legendary structures around and well worth taking a peek as you make your way through Manhattan. 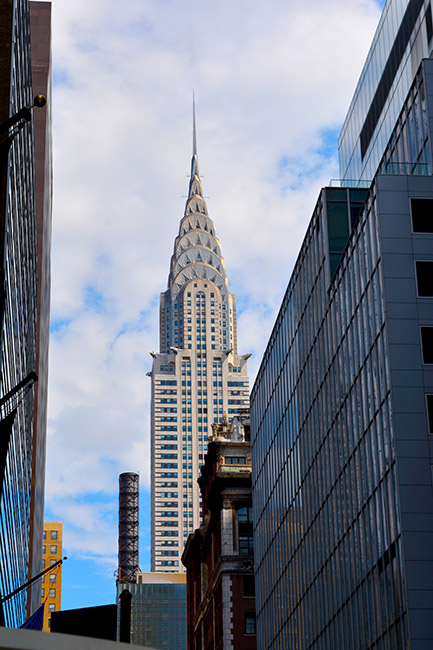 Dubbed as an ‘art-deco’ style structure, it clearly accomplishes the French geometric shape design of this stylistic approach.

Upon completion in 1902, the Flatiron Building not only provided one of the tallest buildings in New York City but it introduced an iconic skyscraper due to it’s quirky yet relevant design. 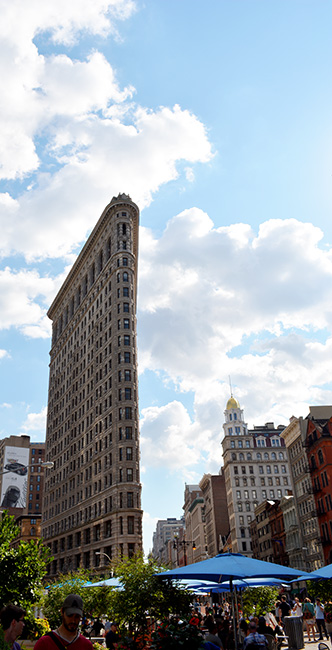 One of the world’s most iconic skyscrapers, and a quintessential symbol of New York City.

You may be wondering where on earth the name “Flatiron” derived from…well, if you are accustomed to household chores you will likely see the resemblance in the design of this building with one of the archaic cast-iron clothing iron!

It is currently being used as an office building for various organizations but in 2009 it was bought out by a luxury Italian real-estate company that envisions turning this into a luxury hotel! This may have to wait for several years until the leases of the current business tenants expire.

As you approach the site of the 9/11 Memorial and home to the former World Trade Centers, there is a distinct blend of feelings here ranging from the sombre, reflective mindset to the more positive feeling as you peer into the sky and see the new One World Trade Center that now stands proudly as the tallest building in USA. 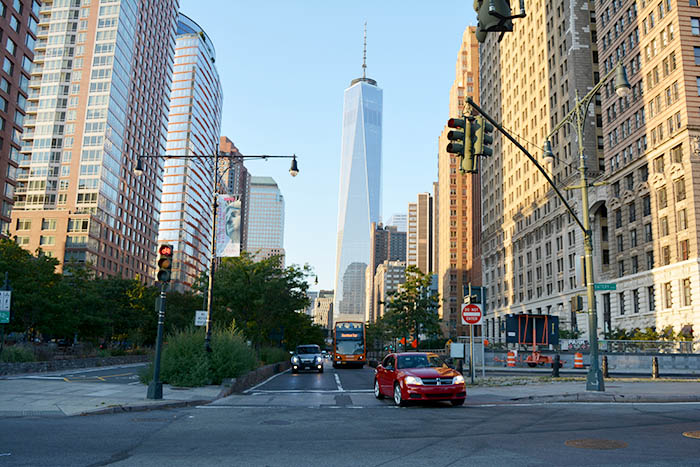 Standing at 1,776 feet, One World Trade Center offers a variety of commercial outlets including business space, world-class restaurants and an observation deck. It’s location directly to the side of the 9/11 Memorial will make this a location that will symbolize New York and America’s ‘Freedom’ for many years to come. 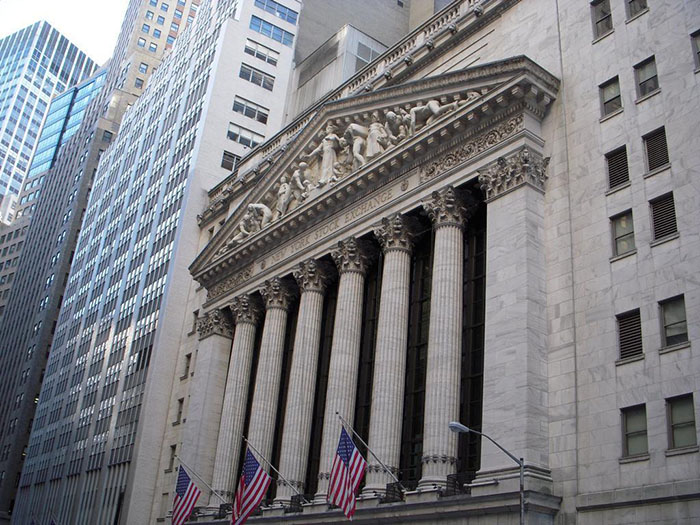 In fact, even if neither of these interest you, take a walk past the Charging Bull monument and head down Wall Street to take a look at a building where billions of dollars worth of trading takes place on a daily basis!

Are you tired yet? If you have managed to experience all of the above structures in New York City and want to wind down and relax in front of the most iconic of them all, head to Battery Park and check out the Statue of Liberty. 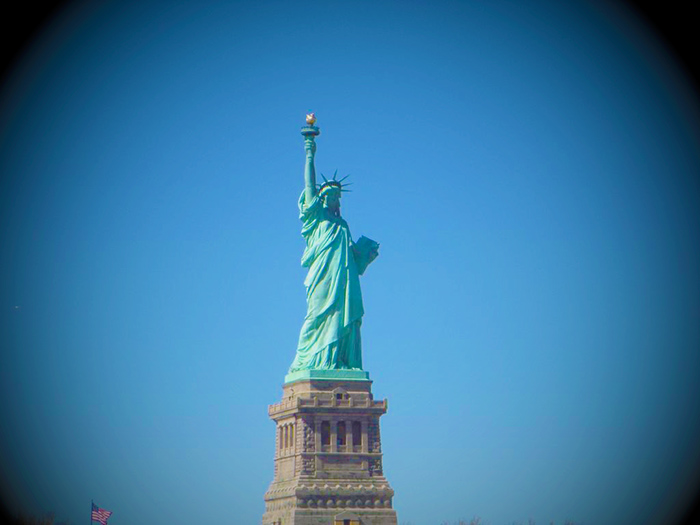 Words don’t do the statue justice, so I would prefer to just leave you in the moment and look at the picture and imagine experiencing this after everything else in New York City!

So there you have our review of the Top 10 Iconic Structures in New York City. What would you add to this list?

The absolute best time to go to Grand Central is at night. Say around 9pm. The lighting is better, the colors are better and its less crowded.

Great list!! You really picked the top 10 most iconic buildings in NYC! I love the flat iron building, it is incredible! Ah, love NYC!!

Love these iconic spots! I would say a must-see for anyone visiting NC for the first time. My fav has to be Rockefeller and I would highly encourage anyone to do Top of the Rock. Best views of the city from there. Better lines and views than from Empire State.

Great list! I've only been to three of these ten- will work on the rest next time...

Cheers Roshan!! So many cool structures in NYC this is just a glimpse of what is available there!

Awesome post, Chris. This post plus your last just has me itching to go to New York like you wouldn't believe. I'd love to explore the library :)