Little Rock, Arkansas may not be the first city on the tip of your tongue when thinking about cities to explore and with good reason, but perhaps it is worth nothing that this city has much more to offer than you may imagine. Walking around downtown Little Rock offers a variety of attractions, awesome cuisine options and of course a myriad of bars to sample a local brew and watch the Razorbacks in action.

Any city that is conducive to walking around and enjoying the surroundings immediately has our vote and this is certainly true in Arkansas’ capital city. We have visited Little Rock on several occasions including a visit to the Clinton Presidential Library which on its was a cool experience, but on our recent trip we decided to spend a little more time exploring the River Market and downtown district.

Thanks to the local CVB office who have recently started offering free walking tours of downtown Little Rock every Saturday, we were delighted to join them on one of their 90 minute excursions exploring ‘The Rock’ to see exactly what this city has to offer.

Our tour started at La Petite Roche Plaza, also known as “Little Rock Plaza” by the Arkansas River so it’s only fair that we start by sharing a little history on this city. Dating back to the early 18th century, the discovery of Little Rock is credited to the French explorer Bernard de la Harpe who was also renowned as being the first person to set foot in Oklahoma.

La Petite Roche Plaza has an iconic rock that is attributed to de la Harpe but history indicates that the Frenchman actually traveled 50 miles beyond Little Rock and North Little Rock before noting a landmark on the north bank of the Arkansas River. This landmark he dubbed as the ‘French Rock’, now referred to as Big Rock.

Although de la Harpe doesn’t specifically mention any other rocks, the likelihood is that he would have stumbled across this outcrop on the southern bank, hence how we now have today’s capital city – Little Rock.

As our tour guides started to share some of the aforementioned history of Little Rock, I couldn’t help but peer across the Arkansas River and marvel at the gorgeous architectural designs of the Junction Bridge and Clinton Presidential Park Bridge to the east.

Peering across the Arkansas River and beyond into North Little Rock, we noticed the USS Razorback submarine docked on the north bank and our tour guides recommended visiting this attraction as you can take a full tour in and around this World War II submarine.

Meanwhile on the south bank we started walking by the Sculpture at the River Market display which has a number of cool exhibits. The heart of the sculpture park is known as the Vogel Schwartz Sculpture Garden and here you will find a collection of 70 different public art sculptures.

The majority of these exhibits are smaller but along the bank you will stumble across several larger designs that offer a trendy reflection on Little Rock’s culture.

Along the banks of the Arkansas River is Little Rock’s answer to Central Park. Ok, so perhaps this is a little ambitious but Riverfront Park offers a myriad of outdoor activities, historical markers and cultural experiences that will entertain visitors.

The First Security Amphitheater is Little Rock’s primary outdoor concert venue and this plays host to a number of events every year including the annual Riverfest which takes place on Memorial Day weekend.

The Peabody Splash Park, named after the Peabody hotel group is a popular spot for children while the Civil War memorials provide a learning experience for everyone who takes a wander through the park.

Little Rock is proud to be home of several leading medical entities and this is typified by the city’s focus on promoting healthy living.

As we walked around Riverfront Park back toward the River Market, we strolled along a section of the ‘Medical Mile’ which was created in 2003 by two dozen local physicians who fundraised a combined $350,000 to help construct part of this trail in the heart of the city.

Whether you walk or bike along this section of the trail, you will be rewarded with a number of murals focused on promoting specific aspects of your health and what can be done to ensure you live a healthy lifestyle.

Regardless of your interests, Clinton Avenue is a hub of variety with restaurants, bars, quaint souvenir shops among others all waiting to entice you through their doors.

One of the highlights of Clinton Avenue and nearby streets is the River Rail Street Car system that makes its way around downtown Little Rock and across the river to nearby North Little Rock.

Although we are focusing our attention on ‘walking’ around the downtown district, the streetcar trollies offer a quaint alternative. We were given a free day pass by taking the walking tour (another great advantage of this awesome tour!) and hopped on the trolley to take this all the way to Heifer International.

The scenic views from aboard the streetcars make this a memorable experience and just like similar trolley systems that we have encountered in Memphis, New Orleans and San Francisco, this is a great way to get around and see more of the city in a short time.

I am happy to include this in this post because I think the streetcar pass goes hand in hand with walking around downtown Little Rock. I strongly encourage you to use the ‘hop on, hop off’ approach with the streetcars because you will certainly see more doing this.

We made the full downtown loop on the green line and also as mentioned took the expanded line to the Clinton Presidential Center (this line only operates until 5:45PM).

The state of Arkansas is unfortunately one of those states that is forgotten as it really doesn’t have the pizzazz of other states. When President Bill Clinton became the 42nd president of the United States, this at least put the state on many folks radar (maybe not always for the best of reasons).

Today, many of Clinton’s avid followers will find enjoyment in exploring the impressive Clinton Presidential Center that is located just a few blocks from the River Market district in downtown Little Rock.

The modernistic design of the center was strategically constructed at the request of Clinton to represent his policies and promise to “Build a bridge to the 21st century” (this is obviously noted as well by the nearby Clinton Presidential Park Bridge).

From artifacts of Clinton’s campaigns and time in the office to the only true full-size replica of the Oval Office, the Clinton Presidential Center is well worth experiencing. After leaving the River Rail Streetcar, we walked past the Presidential Center listening to stories from our tour guide of President Clinton frequently spending time in Little Rock.

For only $7 per person, you can take a full self-guided tour of the Clinton Presidential Center and I would strongly consider taking this before walking back to the heart of downtown Little Rock.

Whether you agree with my rather negative sentiments on the overall experience is entirely personal preference, but before making a judgement I think it’s an attraction you have to visit.

After passing by the Arkansas History Museum, we board the streetcar again to complete our loop of downtown. As we passed by the Old State House, I told Heather that we needed to walk back here from the River Market to check it out.

It’s only a short walk past the Marriott (formerly the Peabody) and the impressive design of what was once the Arkansas State Capitol building is in front of you.

We visited after 5:00PM so were unable to get inside the gates of the Old State House grounds but daily tours are available between 9AM and 5PM (1-5PM on Sunday’s).

Construction of the ‘original’ capitol building started in 1833 but this venue’s most famous moments really didn’t take place until 1992 when it was the site of President Clinton’s election night celebration.

Taking a walking tour of downtown Little Rock courtesy of the CVB really gave us a great overview of what this city has to offer. Of course you will want to head out and explore for yourselves and sample some of the fine attractions and cuisine spots that are located all around the downtown district.

Regardless of your interests, Little Rock has a vibrant and entertaining nucleus surrounded by a myriad of other neighborhoods that offer landmarks and attractions for all the family. Historians will love the Clinton Presidential Center, while children will be entertained all day at the Peabody Splash Park. We both love cities that encourage you to walk around and this can certainly be said in Little Rock, Arkansas.

Have you visited Little Rock? What are your experiences in the state of Arkansas? 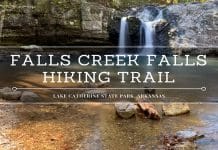 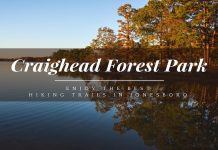 Craighead Forest Park – A Guide to the Best Trails in Jonesboro 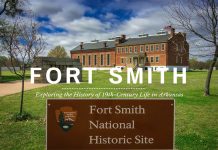