The American Civil War had many iconic battles such as the Battle of Gettysburg and Battle of Shiloh among many others. There is perhaps one battle that you may not be familiar with unless you are an avid history buff that follows the timeline of the Civil War until its conclusion in 1865. The Battle of Franklin played a critical role in the eventual outcome of the Civil War. Today, if you plan on visiting this beautiful town just south of Nashville, you can enjoy an awesome Battle of Franklin tour and quickly realize how important this was in the context of the War Between the States. 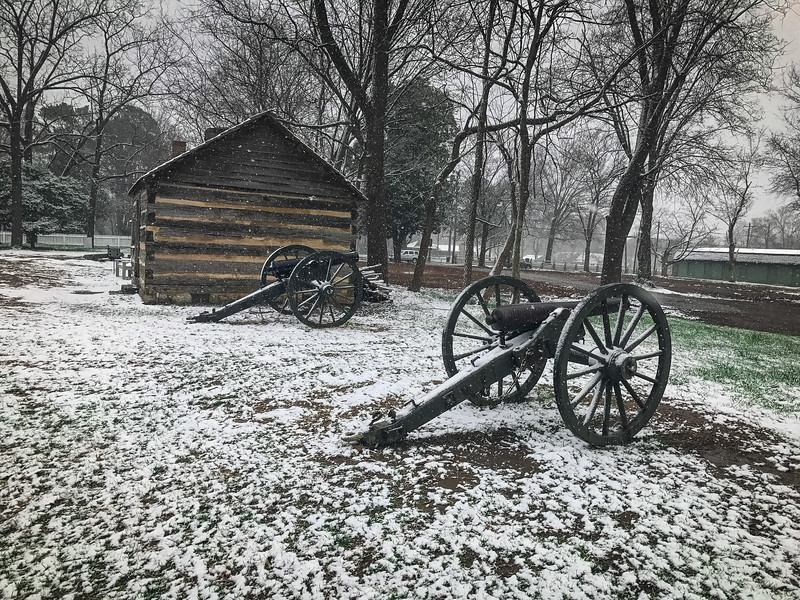 Whether you are visiting Franklin for a long weekend or just passing through this historic town, there are plenty of civil war sites open to the public that you can experience and gain a greater understanding as to how this key battle unfolded. From the Carter House to the Carnton Plantation, Franklin has embraced this history and through exceptional guided tours, visitors can learn everything there is to know about this key battleground. 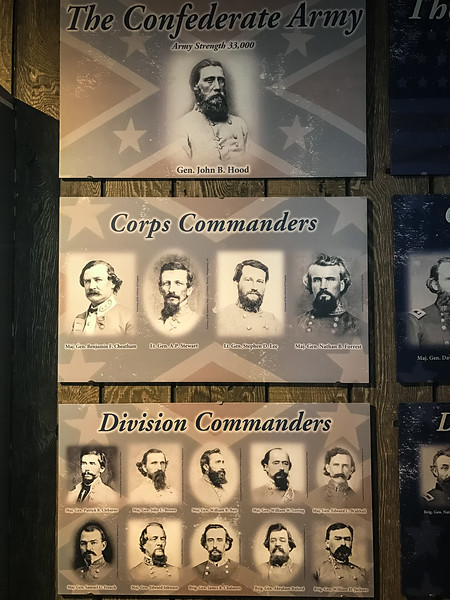 Having spent a weekend experiencing some of the best things to do in Franklin, we want to share some of our favorite spots and hopefully inspire you to learn more about the Battle of Franklin that took place on November 30, 1864. 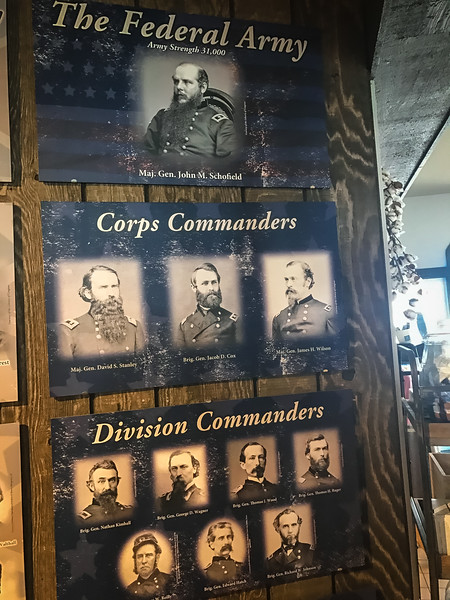 If you are visiting Franklin to learn more about the American Civil War, there are a variety of tours available. If you have limited time, perhaps the best value is the “Value Ticket” which gives you access to all three of the historic house museums that I am going to share more information on later.

Alternatively, if you are visiting Franklin between Tuesday and Saturday, you will have the opportunity to purchase a “Battlefield Tour” ticket where you are taken on a comprehensive walking tour of the Franklin battlefield passing by at least six locations on the field where crucial portions of the battle unfolded.

Here is a quick breakdown of the pricing at the time of publication.

All three sites operate the same opening hours but are of course subject to change in the future.

The sites are closed on the main public holidays and as we always encourage folks, please be sure to check out the Battle of Franklin trust website for updated prices and opening times as this may be different throughout the year.

***Photography is allowed throughout the grounds of all three historic homes and you can take as many pictures as you want as you explore outside. However, as soon as the guided tour inside the homes starts, no photography or video is permitted.***

It’s an unfortunate reality that when you explore attractions with such history and heritage that you will be mandated to leave your cameras behind. However, this does encourage you to listen closely to your tour guide as you are not distracted by trying to capture those perfect images as you wander around the inside. 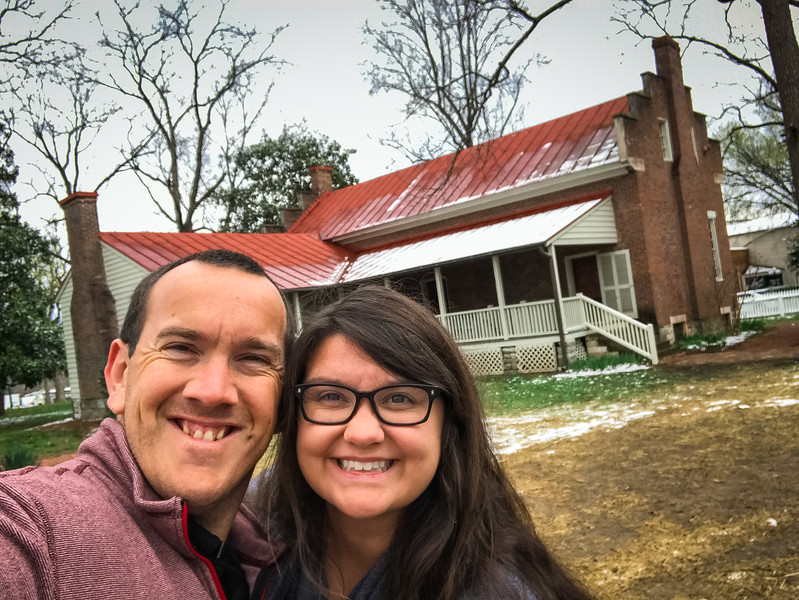 As you will find out throughout this post, many of the objects inside are originals and it’s critical that the amount of light is controlled throughout the homes to ensure they stay preserved over time.

Our Battle of Franklin tour started close to the historic downtown area with a visit to the Carter House. Before we started our tour, I have to admit that neither of us knew much about the battle so we were eager to learn. The Carter House was the first landmark we visited and many will argue that it’s the most iconic spot in the Battle of Franklin given its location in the town.

Despite the chilly weather and snowy conditions, we braved the elements along with a couple of other hardy souls and prepared for our tour of the Carter House to begin. As you will see from our various images, we also returned the day after when the weather had drastically improved to capture some alternative images. 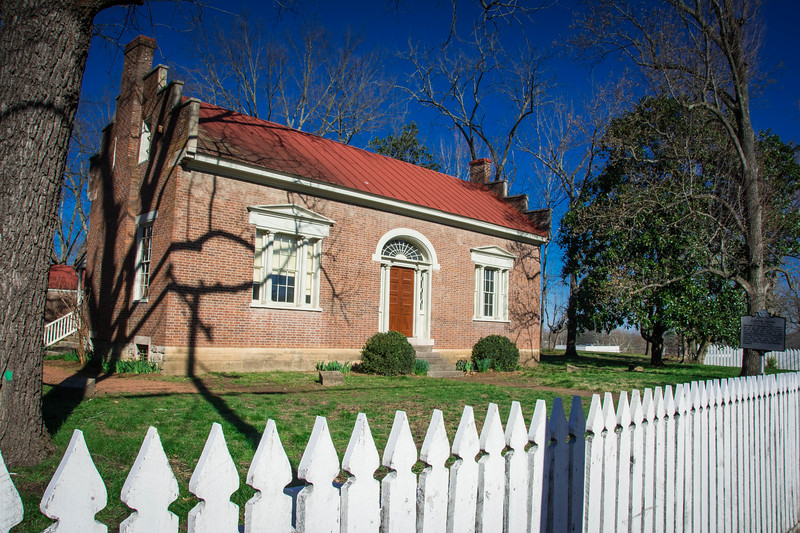 We hoped that our guide would be knowledgeable and share some background information on the battle in addition of course, to the Carter House itself and the relevance to the Civil War. 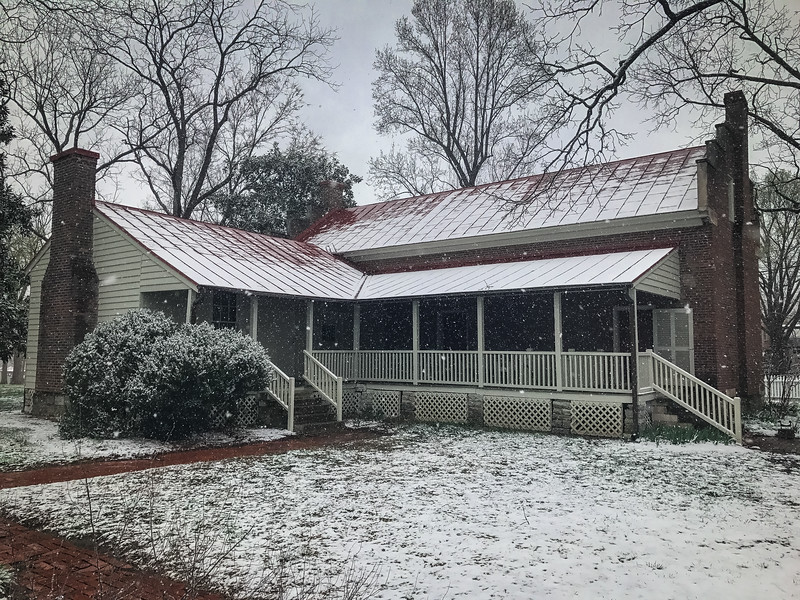 Fortunately, she didn’t disappoint and if anything, she gave us way more information than we could have expected. Her desire to share knowledge and the passion you could hear in her voice was apparent throughout the 60-minute tour.

Whether you choose to spend some time before or after the guided tour exploring the grounds of the Carter House, there are plenty of buildings and iconic remnants that tell their own story of the Battle of Franklin.

Gunshot holes can be seen scattered throughout the smaller buildings as well as the main residence. The Farm Office was certainly the building that came under the most attack during the battle and all of the bullet holes are a clear indication as to the intensity of the fight in 1864. 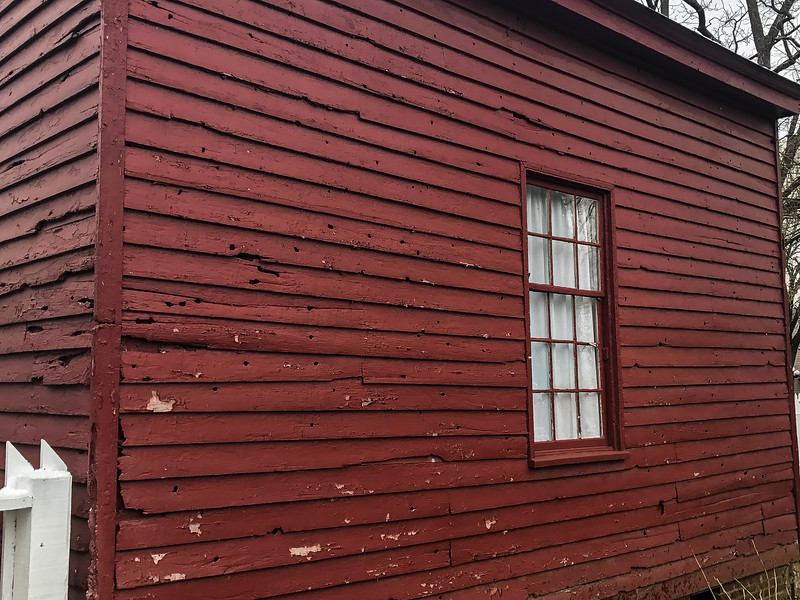 The construction of the main house was completed in 1830 by Fountain Branch Carter and for many years until the Civil War, it was a regular family house for the Carter family. This all changed on November 30, 1864, when the Union forces led by John Schofield had positioned themselves on the southern edge of Franklin as they ventured toward Nashville.

Many locals believed that both sides would simply bypass Franklin given the small size and lack of importance in comparison with the greater goal of capturing Nashville. 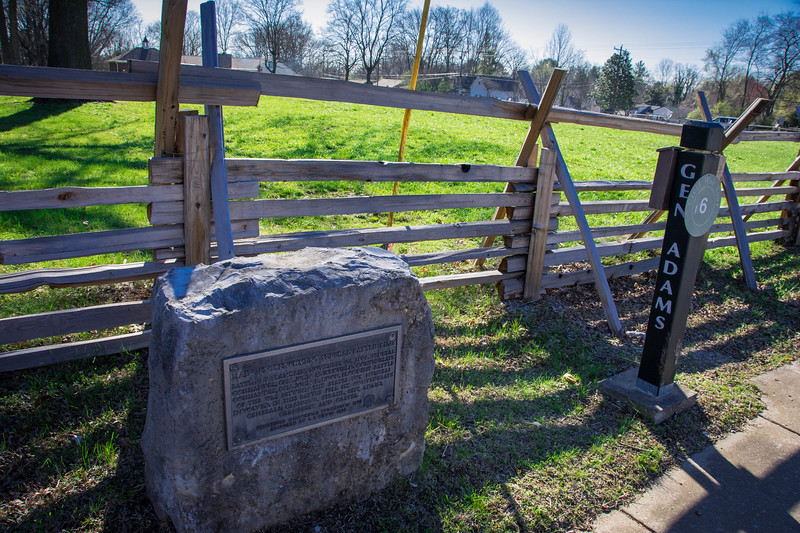 However, it soon became a key battlefield when Schofield’s army bypassed John Bell Hood’s Confederate army during the night, only to have their progress halted at the Harpeth River. Hood realized that the only way he could possibly regain control of Nashville for the Confederates was to beat the Union forces and this is where the bloody Battle of Franklin commenced.

What does all of this have to do with the Carter House? The key location of this house just inside of the Union defensive perimeter meant that forces both sides of the Columbia Pike fought throughout the evening and night in and around the grounds.

The fighting in the Carter yard and beyond to the east to the Carter Cotton Gin quickly became savage and bloody.

Meanwhile, despite lasting only five hours, there were 9,500 casualties (2,000 dead, 6,500 wounded and 1,000 missing) in this battle. The Carter family remained quietly housed in the basement of their home while Union forces and Confederate soldiers fought above them and lost their lives.

The moment the battle ended, our guide told us how Fountain Branch had to move bodies off the basement steps so that his family could climb out to see the horrific sight of what had occurred just hours previously.

Throughout the tour, our guide spent the majority of the time depicting the horrific battle and I have to admit just listening to her detailed portrayal was enough to make me realize just how awful it must have been for the Carter family to suffer through this experience. 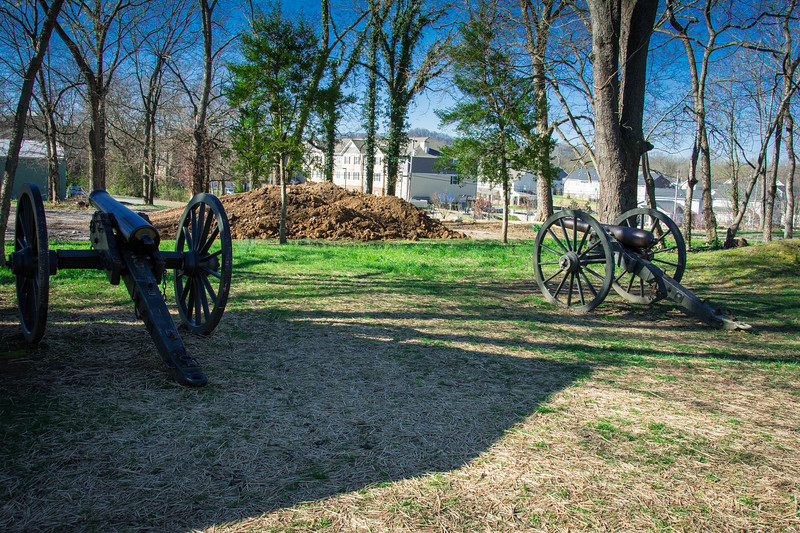 I can only imagine what the aftermath was like trying to deal with thousands of bodies in their house and yard.

A tragic ending but definitely an iconic location in not only the Battle of Franklin but also the American Civil War!

Just a few steps across the Columbia Pike from the Carter House is another important location in the Battle of Franklin – the Lotz House. In a similar fashion to the Carter family, the Lotz family lived in this gorgeous residence and never felt any need to move away despite the imminent arrival of the armed forces en route to Nashville in 1864.

However, on the morning of November 30 when the Federal line had essentially been formed in their front yard, the Lotz family opted to head across the street to the Carter House given that they didn’t figure their wooden house would survive the onslaught of the battle that was about to commence. 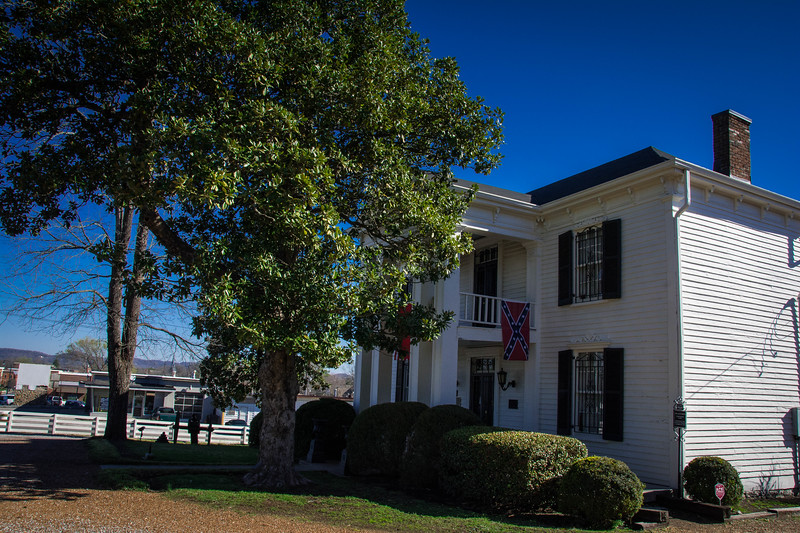 For 17 hours while the battle raged all around them, the Lotz along with 20 other people remained safe and survived.

Thousands of dead bodies were scattered across the Columbia Pike the following morning as they made their way across the street to assess the damage to their home. Despite the numerous blood stains and bodies throughout the house, the Lotz family was surprised to see it still standing, albeit with a large hole in the roof after a cannon crashed through. 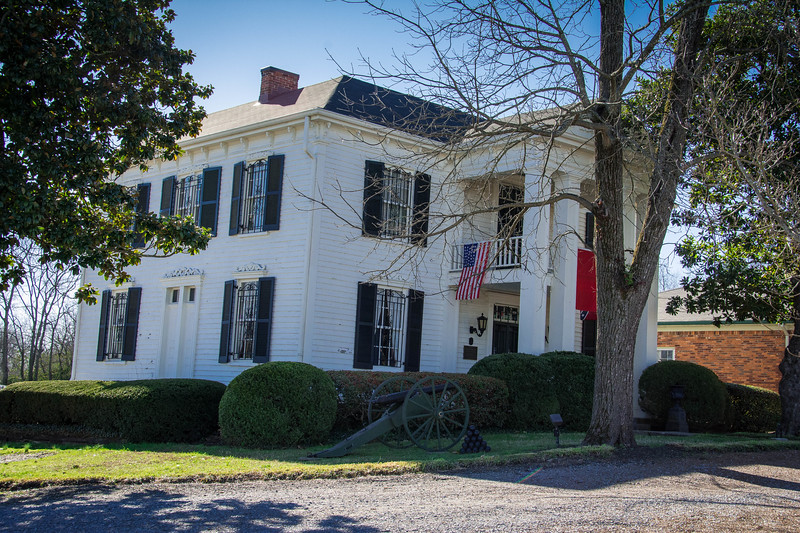 Can you imagine the work that was required to get the house back to a livable state? Or can you envision the heartache of having to deal with hundreds of corpses and limbs scattered throughout your living quarters?

After spending the morning exploring the heart of historic downtown Franklin where the heat of battle took place, we took a short drive to the Carnton Plantation to explore another site which played an integral role in the Civil War. 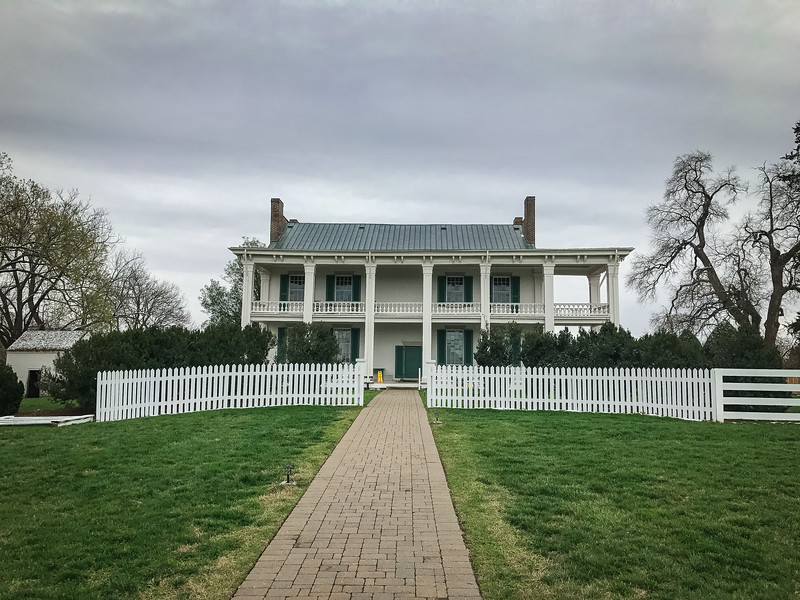 Dating back to 1826 when Randal and Sarah McGavock built this property, and ironically the name “Carnton” derives from the Gaelic word “cairn”, which means a pile of stones raised to mark a memorable event or to honor a fallen hero.

When you stand on the grounds of the Carnton Plantation today, whether you are paying your respects in the McGavock Confederate Cemetery or simply getting ready to take the guided tour of the house, it’s certainly an appropriate name to give this residence when you hear the history surrounding the location.

In 1864, when the right wing of the Confederate army headed towards the historic battle with the Union army in the heart of Franklin, the decision was made to utilize the Carnton residence as a field hospital. Throughout the night of November 30th, over 300 injured soldiers were brought into the Carnton house to be treated by surgeons and volunteers.

Our tour guide shared a number of stories with us including how the McGavock family helped treat the wounded soldiers and Sarah offered a motherly shoulder for the young men to lean on as they would have been fighting for a prolonged period of time without any contact with their mother.

As we walked around the Carnton house, blood stains were apparent where the soldiers had either bled to death or recovered from their injuries. 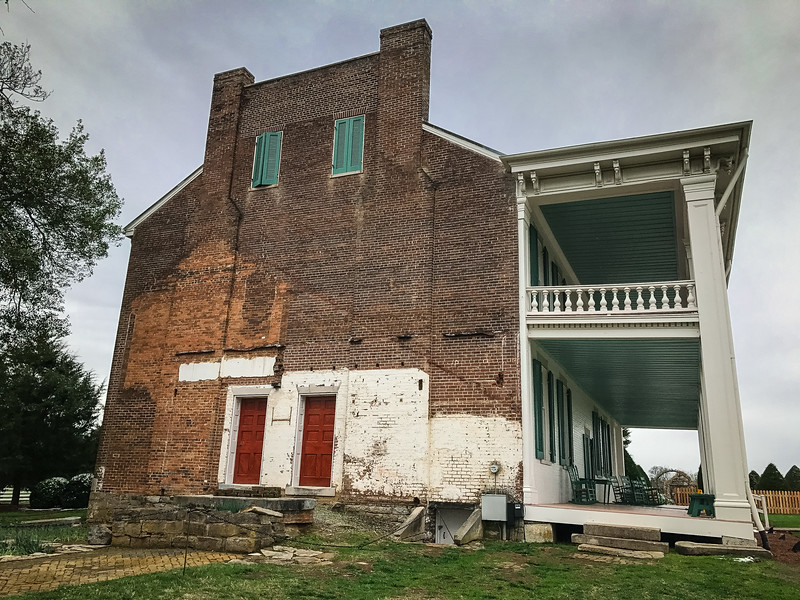 Thinking about a family trying to go back to living a relatively normal life after these tragic events is certainly unimaginable but this is what the McGavock household faced. It was a surreal experience walking outside and around the Confederate Cemetery as you think about all of those bodies that were laid to rest.

It’s an incredible experience to take the Battle of Franklin tour around three historic homes that played such a crucial role on that tragic day in 1864. If you have any interest in history, paying a visit to Franklin, Tennessee should certainly be on your radar because the community has done an amazing job emphasizing the history and heritage present throughout their town. 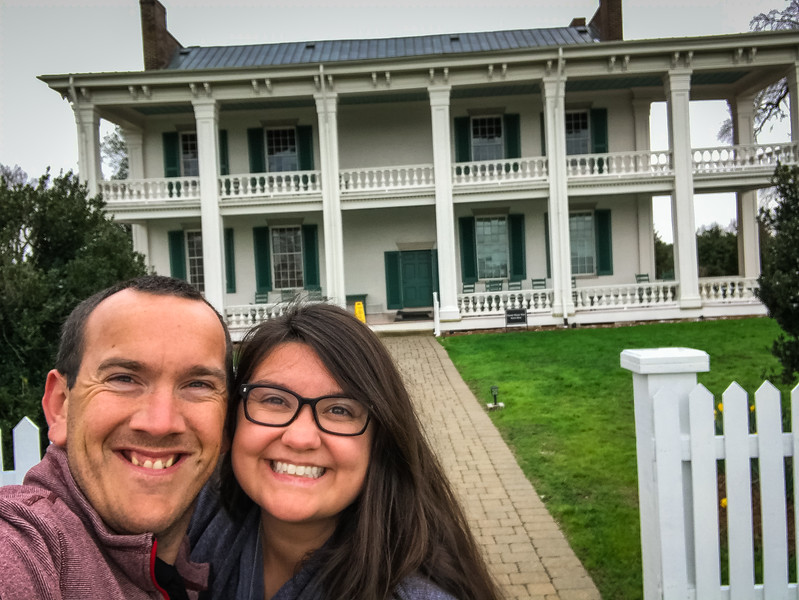 Disclaimer – We would like to thank Visit Franklin for hosting us on this trip and providing us with two Value Tickets to experience these historical sites. These are solely our personal opinions/experiences and we were not financially compensated for this post.

This is a deep information about Franklin tour , I will looking for holiday same like this .

Thanks so much! The history of Franklin is definitely worth exploring.