Traveling the world not only enables you to visit iconic destinations but it also allows you to stumble across gems that perhaps you normally wouldn’t think about experiencing. Located in the heart of the Emilia-Romagna region of Northern Italy, Bologna is a city that we can well and truly attest is a place that should be on any Italian travel itinerary. Whether you have 24 or 48 hours, or perhaps you are planning on using this part of Italy as a base to explore other areas, when it comes to the best things to do in Bologna, there are plenty of reasons to justify a return visit. 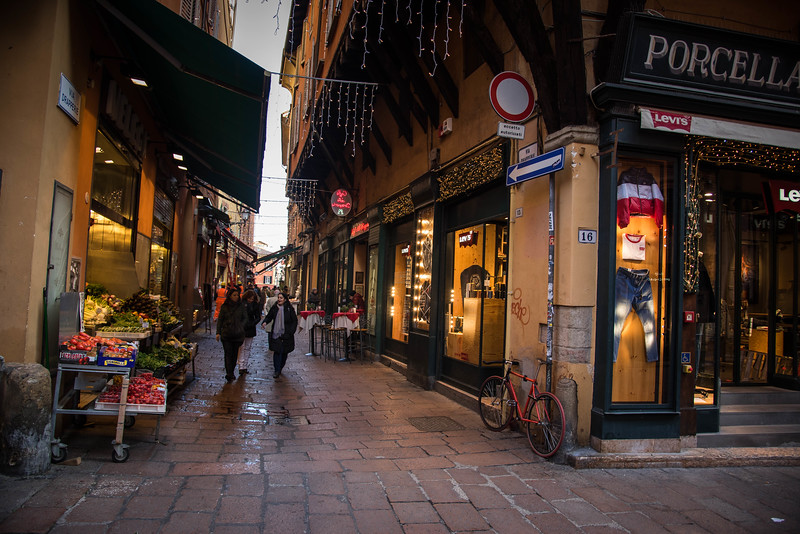 Bologna is a city that frequently lies in the shadow of the more infamous Italian counterparts such as Rome, Milan, Naples, and Florence. However, after visiting this vibrant hub for just over 24 hours, we quickly realized that this city is somewhere we would love to return to in the future. 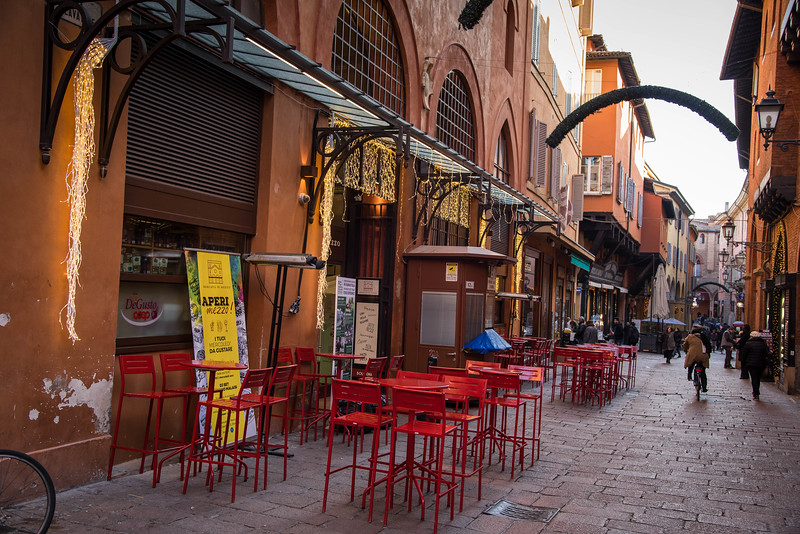 Don’t let the name fool you…Bologna is not just about “bolognese” or even the American “Bologna sausage” that you may be thinking about. In fact, when it comes to traditional cuisine found in Bologna, you may be surprised at exactly what you will find here. Let’s take a look at our experience in the Emilia-Romagna region and hopefully, after reading this post, you will be inspired to book a trip in the near future. 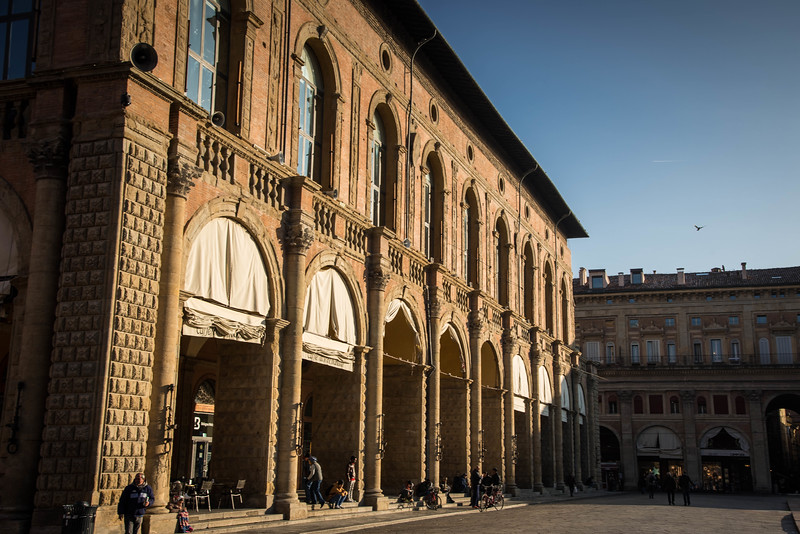 Where to Stay in Bologna?

Enjoying a visit to any destination starts with finding a great place to stay. If you can find a spot that is affordable, in a great location and has all the amenities you need, well it’s fair to say you are on to a winner. But when you find a place that has all of these benefits AND it’s somewhere that you immediately feel like you are at home, I think these types of places are very rare to stumble across and you should definitely cherish them. 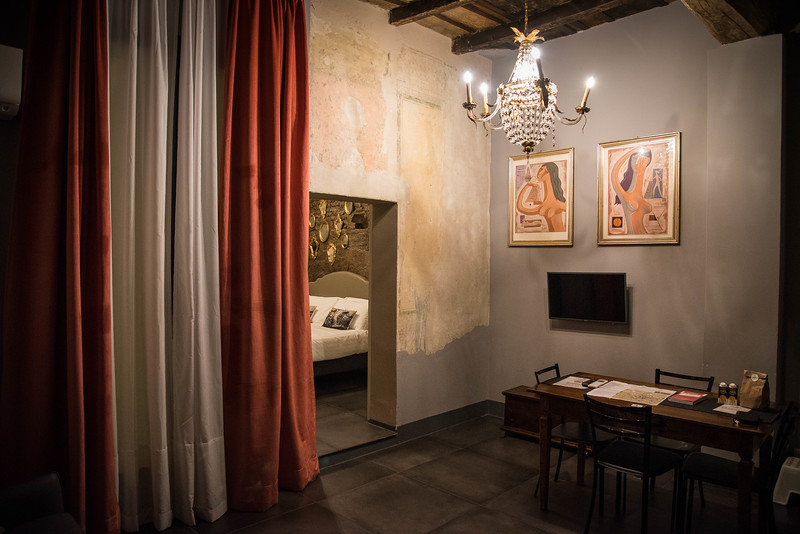 Welcome to L’8Boutique Design Apartments located in the heart of Bologna! Having stayed in several different hotels during our European Eurail adventure, we arrived in Bologna unaware of what was awaiting us. 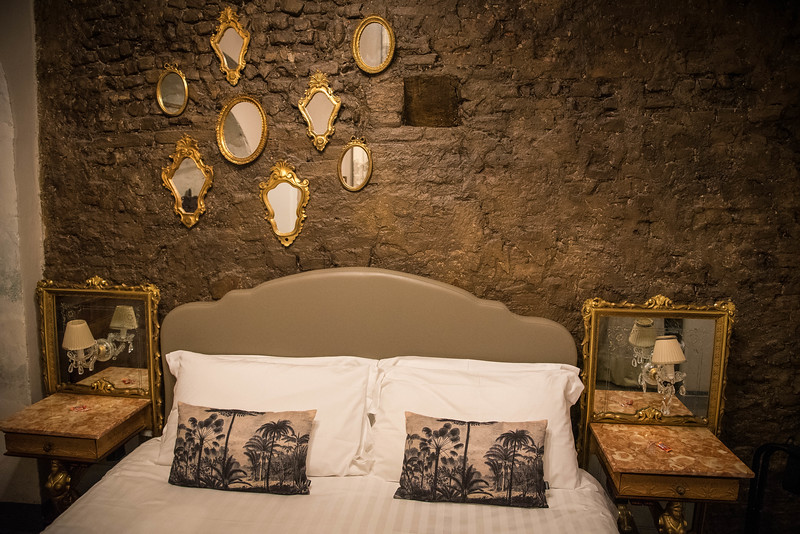 The moment we found the apartments, located conveniently just a short walk from the heartbeat of Bologna, we realized we had found a real gem. 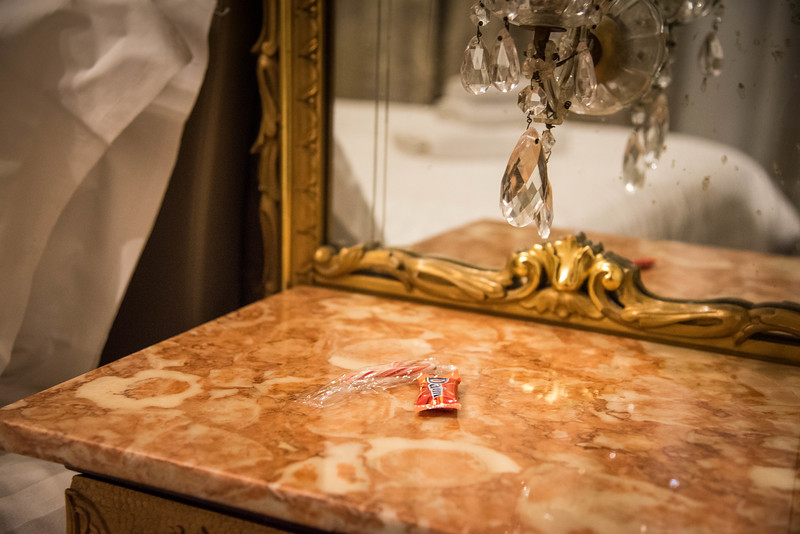 We were welcomed by Federica, one of the two individuals (along with Francesca) who take care of these apartments, and she immediately showed us to apartment 802 located on the ground floor of this historic complex. 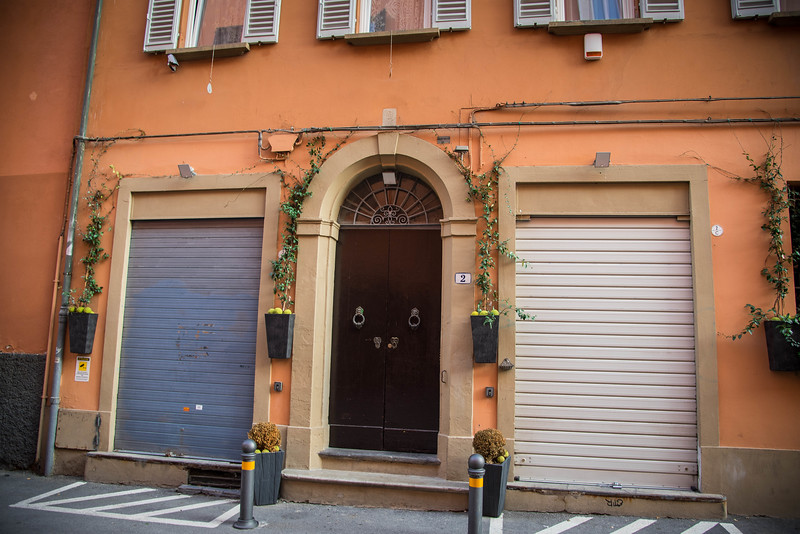 The first thing worth noting as you enter this apartment is the distinctive blend of modern vs contemporary style. The key code access offers the modernized feel while entering our apartment we noticed the chic, quintessential Italian decor that we love. 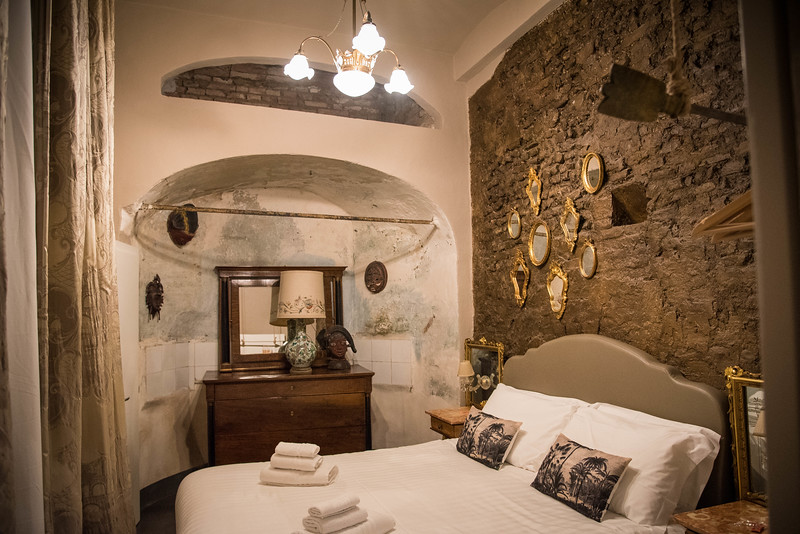 Our apartment had everything we needed to ensure our 24-hour stay in Bologna was perfect. The self-catering option allowed us to head down the street to the nearby Conad grocery store and collect a number of local ingredients so that we could create our very own Italian cuisine masterpiece.

Ok, so perhaps we need to do a little work on this but having the ability to cook your own meals is a huge benefit, particularly if you are traveling around Europe on a tight budget. 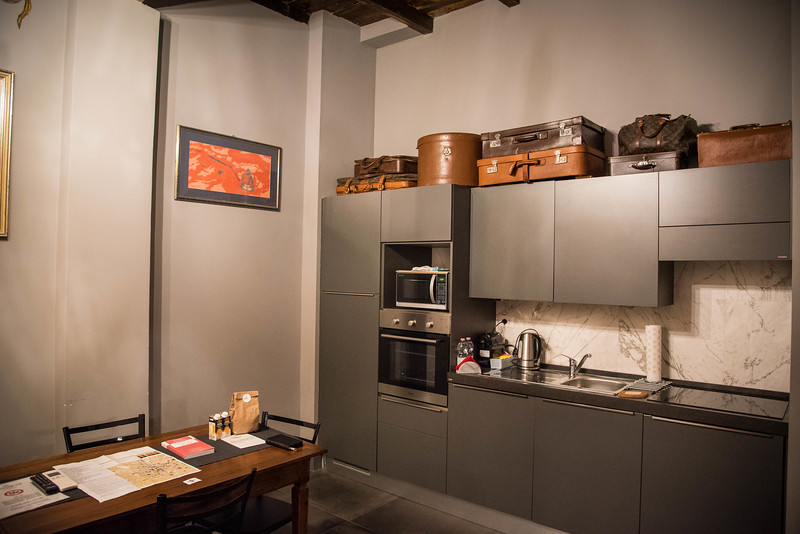 The living room, kitchen and dining room area are an open plan meaning that everything you need is readily available. Head through the doorway into the bedroom to enjoy a generous King size bed (I want to emphasize this because in Italy, finding a King sized bed isn’t always easy!). 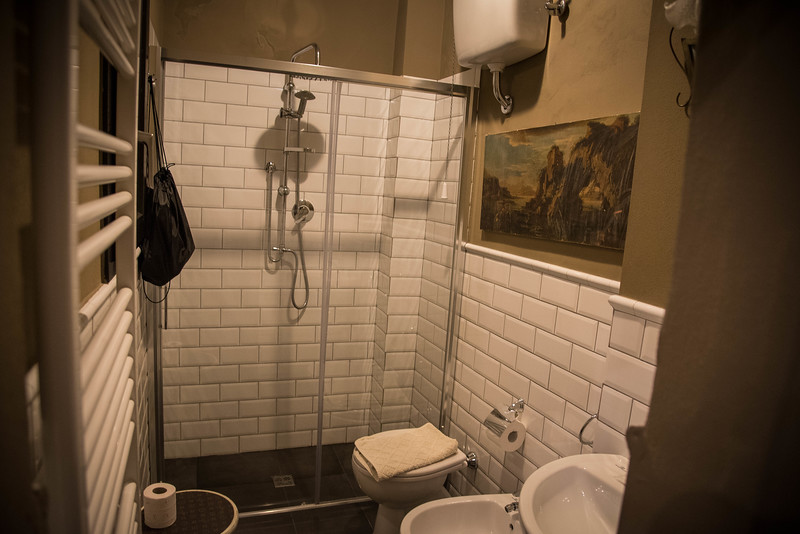 The en-suite bathroom has a large shower, while outside is a small patio area perfect to enjoy a late night Lambrusco or two.

L’8Boutique is dedicated to the traveler who appreciates personality, style and impeccable service, as well as luxury, discretion and privacy.

Visitors to Bologna are spoiled for choice when it comes to hotel options, just like any other city across the globe. However, if you could take one recommendation from this post, we would strongly encourage you to consider staying at one of the L’8Boutique apartments…you WILL NOT regret it! 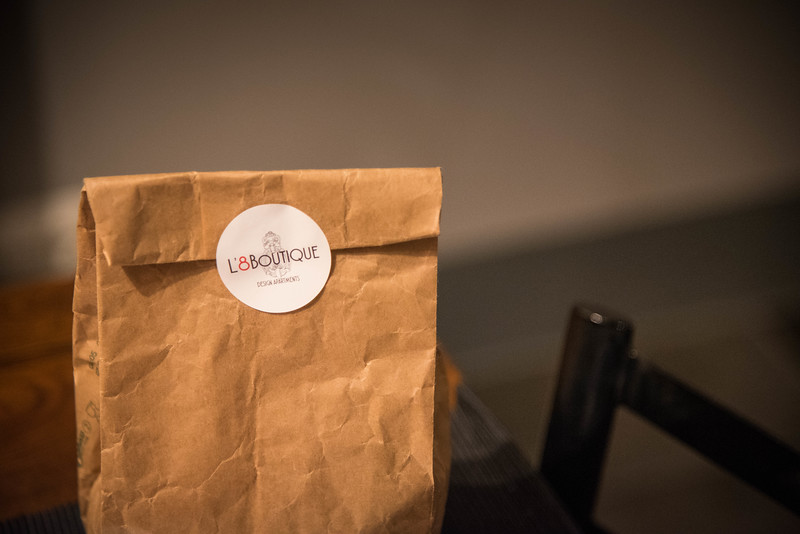 Best Things to Do in Bologna

Ok, so you have found the perfect place to stay and now it’s time to head out and explore this beautiful city. Don’t worry, you won’t be short of options because there are plenty of awesome things to experience in Bologna. 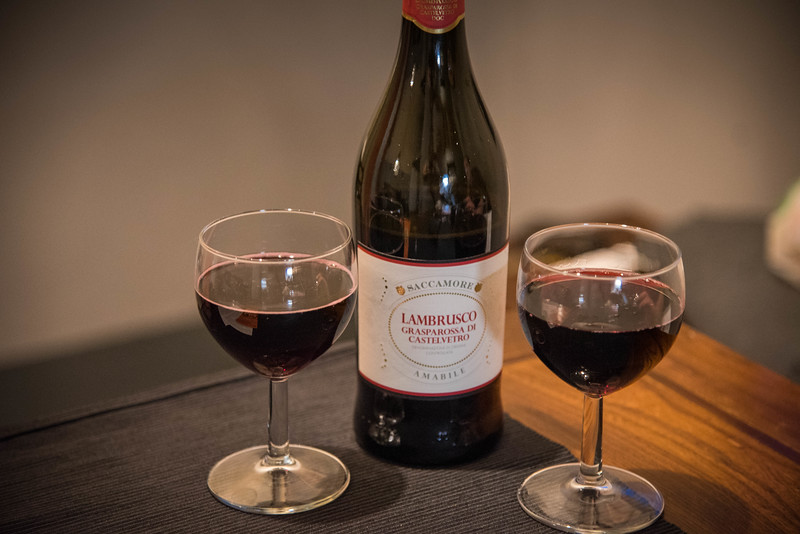 If the sound of drinking Lambrusco is appealing, there are plenty of bars and restaurants scattered around this city that will offer you some of the best wine to be found in the region. Alternatively, you can always head to the local supermarket as we did and buy a couple of bottles to take back to your abode and enjoy a glass or two while indulging in your favorite Italian cheese selection. 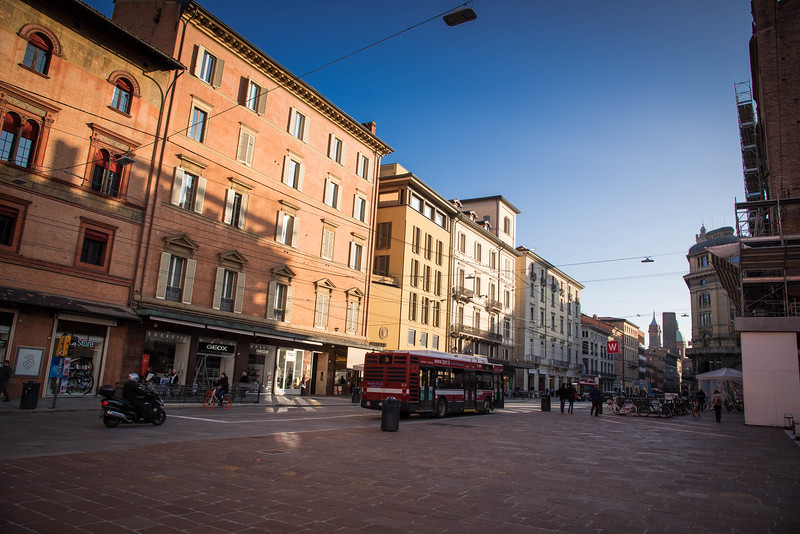 But anyone with any aspirations of exploring the best of what Bologna has to offer will want to get out and wander the streets. Let’s take a look at 5 of our favorite reasons why Bologna needs to be an Italian city on your radar!

Similar to many of its more infamous counterparts, Bologna is made up of several “squares” that collectively create a series of distinctive architectural landscapes that make this a city you can quickly fall in love with. 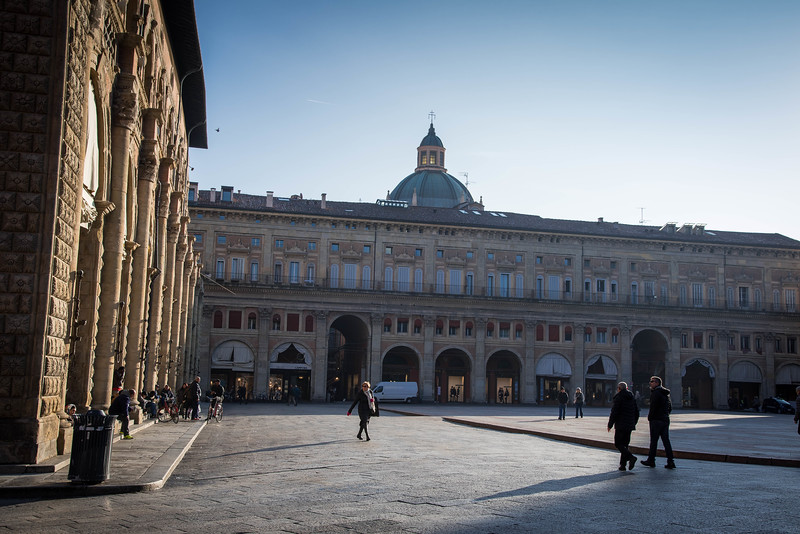 At the heartbeat of Bologna is the Piazza Maggiore, the main square that is lined full of gorgeous Medieval and Renaissance-inspired buildings. If you have any interest in period style architecture, your eyes will quickly be drawn to the intricate details of the designs surrounding this square. 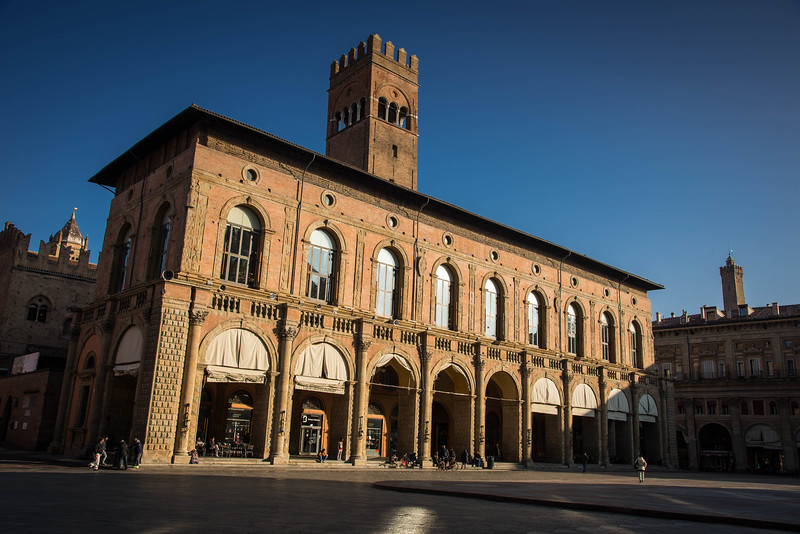 Although the history of this square dates back to the early 13th century, the name “Piazza Maggiore” actually dates back to during the 16th century. However, for a period of time, this name transitioned between this and Vittorio Emanuele II until it finally settled with the current name after 1945. 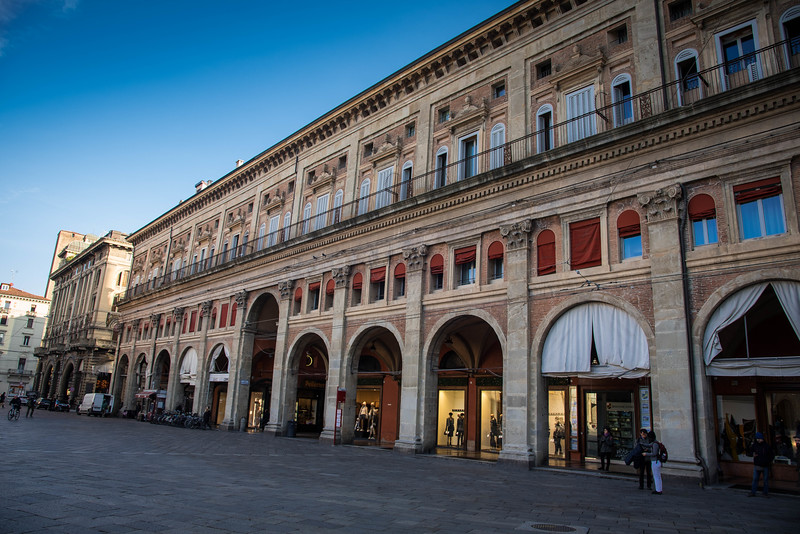 In terms of iconic buildings that can be found in the Piazza Maggiore, the list includes the Basilica di San Petronio, Palazzo dei Notai, Palazzo d’Accursio, Palazzo del Podestà and Palazzo dei Bianchi.

You could easily spend several hours admiring these architectural masterpieces but for those of you simply passing through, your attention will quickly be drawn to the Basilica di San Petronio because of its unique design and imposing stature overlooking the square. 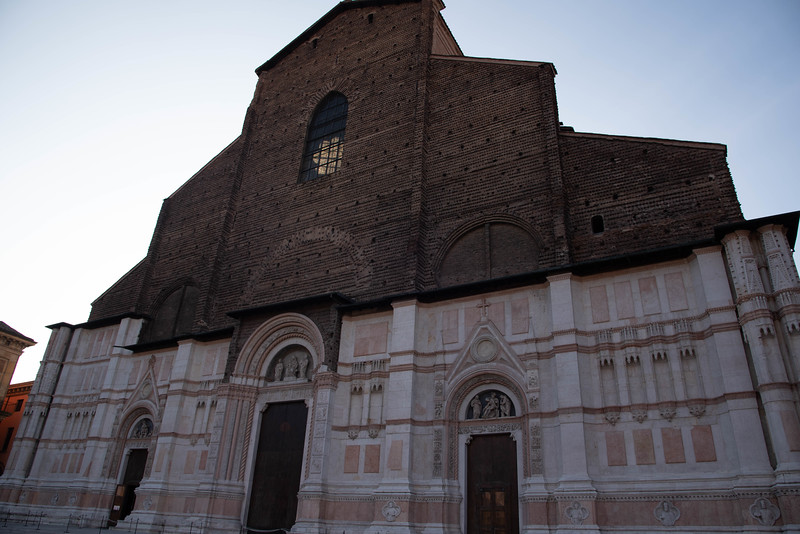 Bologna has long been renowned as being a city with an abundance of towers. However, today the number has diminished dramatically but there are still several iconic ones that are worth experiencing.

Of the plethora of original towers constructed, some of those that we can still see today include the Azzoguidi Tower, the Prendiparte Tower, the Scappi Tower, and the Uguzzoni Tower. All of these, if you have time, are well worthy of adding to your Bologna itinerary. 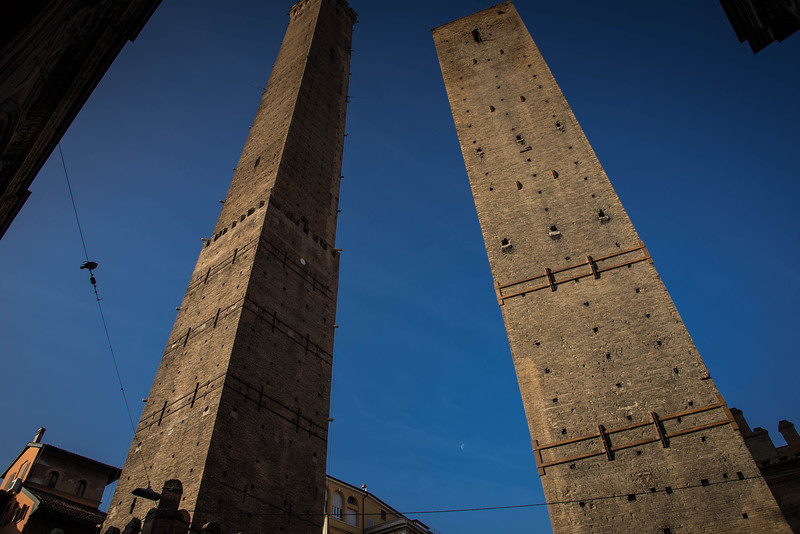 But there are two towers, known locally as “Le due Torri” that should be one of the first landmarks that you choose to visit during your adventure around Bologna. The 320-foot Asinelli Tower and the truncated Garisenda Tower form the “Two Towers” that are a magical sight but also a challenge waiting for you to conquer. 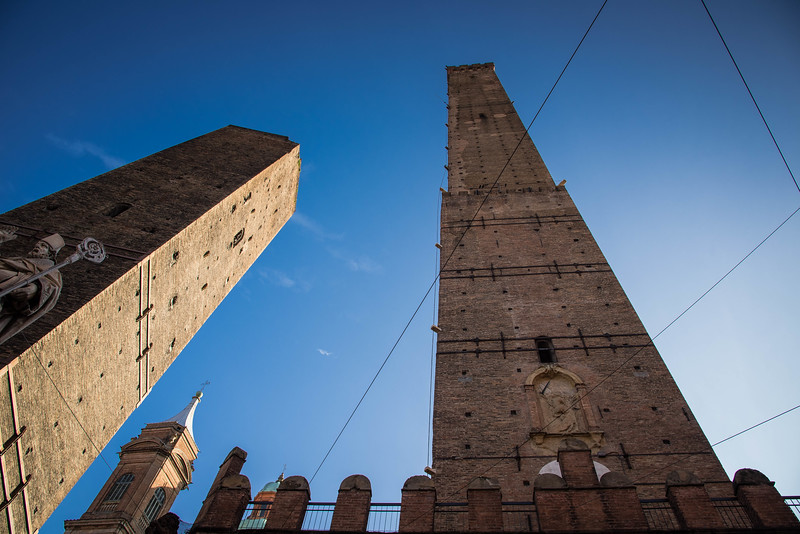 Get ready for a pretty intense climb of 498 steps to the summit of the Asinelli Tower but don’t worry, for those of you willing to pay 5 Euros to burn several hundred calories (after indulging in Bologna’s find foodie scene, you may be raring to go!), the breathtaking panoramic views across the city are worth the effort. 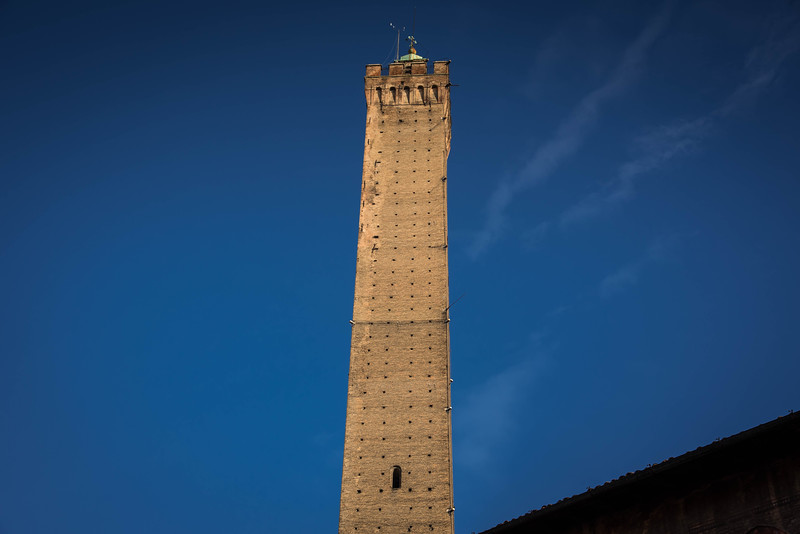 If you have a keen interest in historic and spectacular architecture, a visit to the Basilica of San Domenico is a must during your visit to Bologna. Located just a short walk from the Piazza Maggiore, this gorgeous structure dates back to 1228 when it first opened its door.

St. Domenico of Guzman, the Spanish founder of the Order of Preachers, arrived in Bologna at the start of the 13th century and purchased a church where the Basilica stands today. After his death in 1221, the monks expanded the church to what we see today and honored St. Domenico by naming it after him. His remains are preserved in the chapel of San Domenico inside a marble ark.

Although the exterior of this church may not be anything distinctive that allows it to stand out from other Italian Basilicas, it’s the interior once you step inside that makes this such a unique and breathtaking experience.

Bologna is unique on so many different levels, none more so than the fact that there are 40km of porticos that create a distinctive atmosphere while taking a stroll around this city. Every city has something that helps it stand out from the rest and I would argue that Bologna’s portico scene is a feature unlike anywhere else in the world. 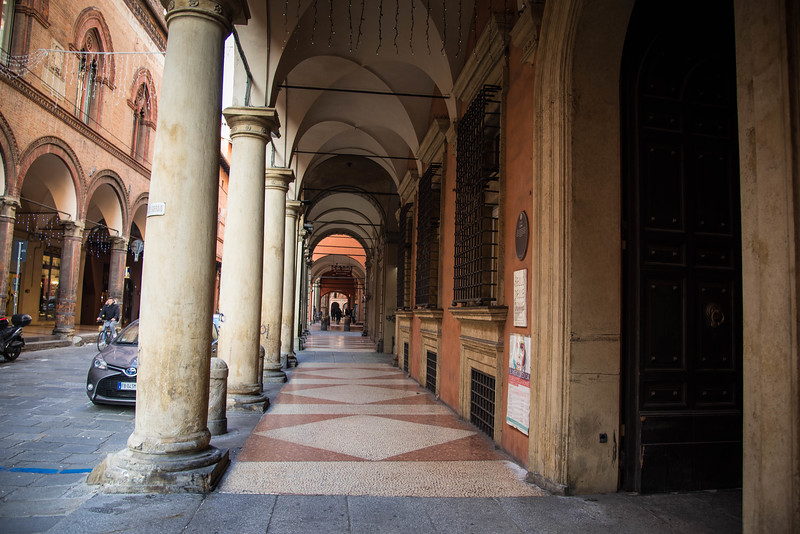 One of the main benefits of having so many of these cool “arch” style features scattered across Bologna’s architectural network is that regardless of the weather, you can enjoy this beautiful city in the comfort of being undercover. Bologna has the longest portico in the world, stretching 3,796 meters from just outside the city walls to the Sanctuary of the Madonna di San Luca on the top of the Colle della Guardia. 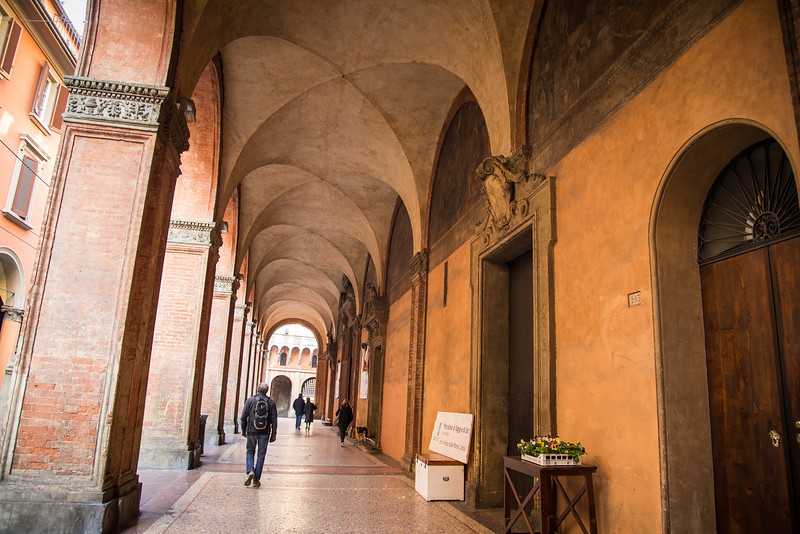 The beauty of having so many porticos throughout Bologna (aside from the aforementioned benefit!) is that they add a wealth of character to a city that already contains a plethora of majestic architectural beauty. Each of the porticos has something distinctive, whether it’s the intricate details of the design, the color or the atmosphere created inside as locals and visitors alike stroll through the streets of Bologna. 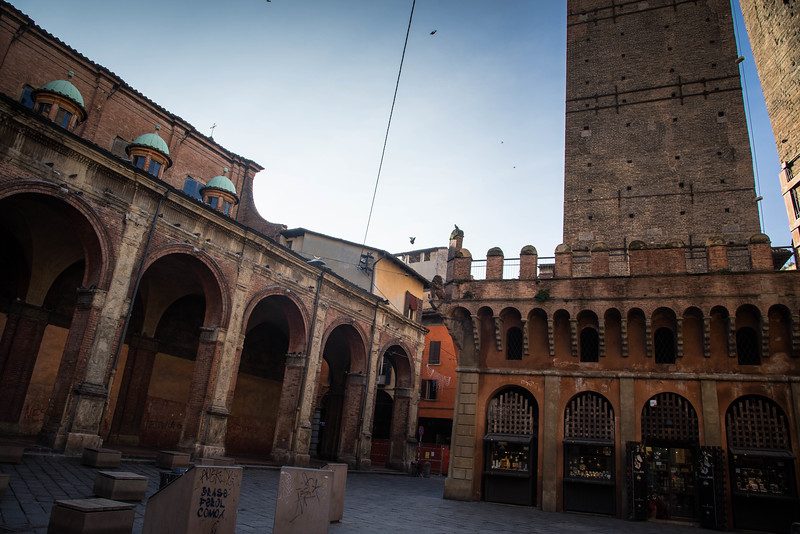 You have probably established by now that the theme of most of our recommended attractions in Bologna is architecture. But that’s for a very good reason. The Church of Saints Bartholomew and Gaetano is another breathtaking example of Renaissance style architecture and is associated with the Roman Catholic denomination. 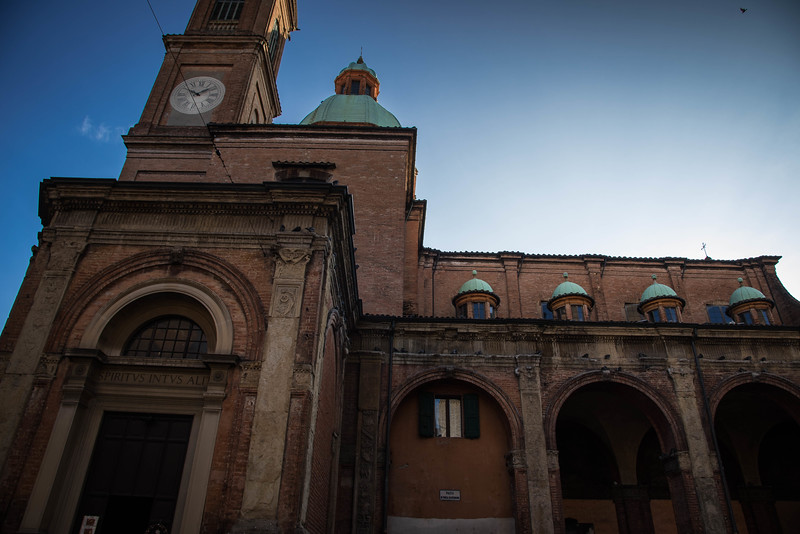 Located near the site of the “Two Towers” adjacent to the Strada Maggiore, this gorgeous construction dates back to the early 16th-century. 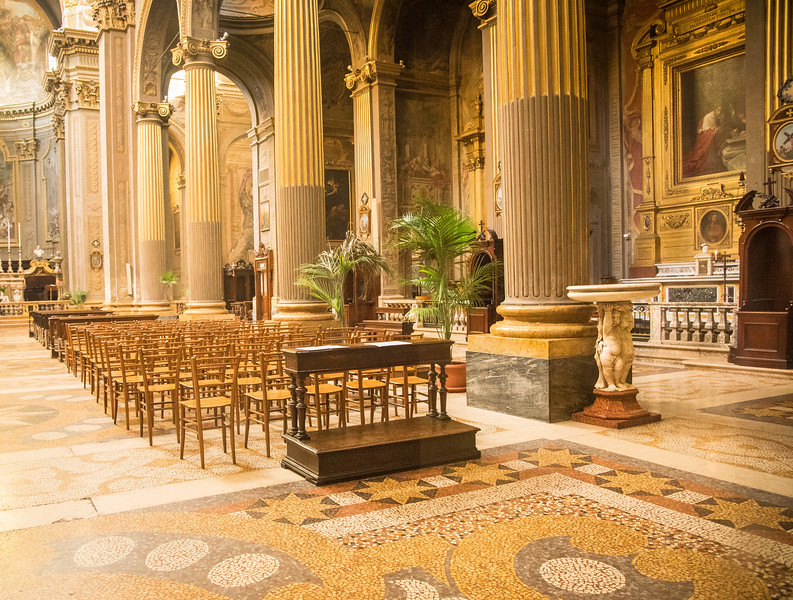 A church dedicated to Saint Bartholomew likely goes back even further to the 5th-century but regardless of your interest in the history of this place of worship, your interest will likely spark up as you explore the interior. 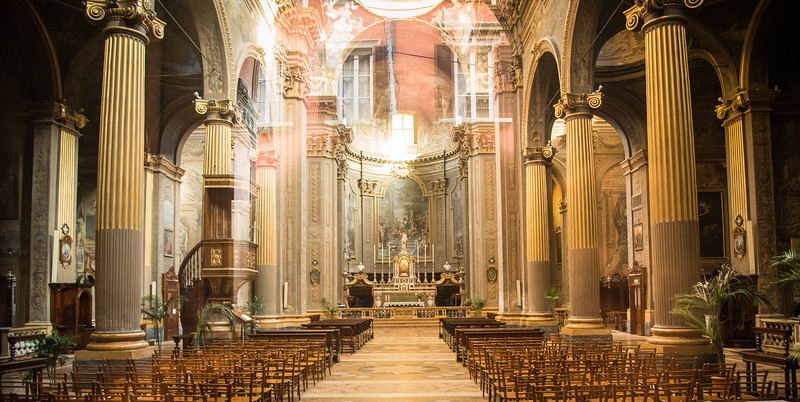 Bologna is one of those cities that is frequently left under the radar of the more infamous counterparts but we are so happy that we decided to spend some time exploring this part of the Emilia-Romagna region. 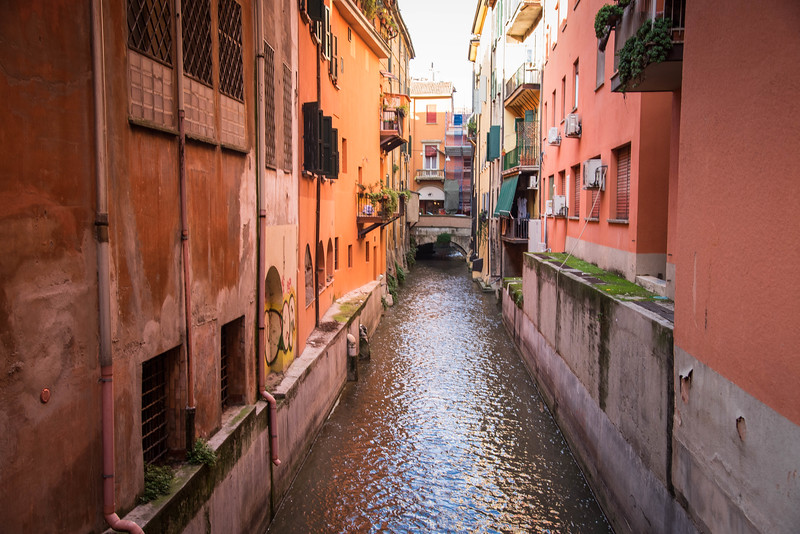 In addition to being a beautiful city, it’s actually a great place to stay and utilize as a gateway to explore other parts of the region. We highly recommend staying in one of the L’8Boutique apartments and then heading to nearby locations to enjoy day trips before returning to your “home away from home”. 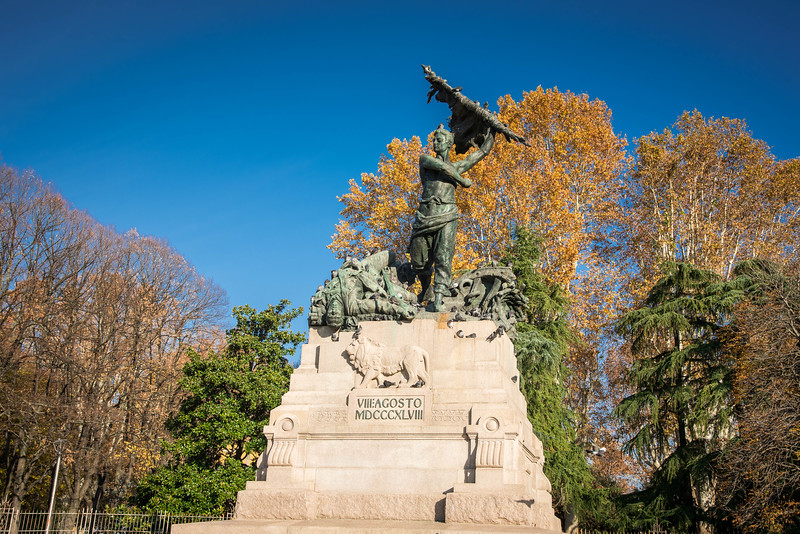 Places such as Rimini (where you can take a day trip to explore the landlocked country of San Marino), Parma (home of “Parma Ham”) and Modena (along with other places in this region, this is a great place to experience traditional balsamic vinegar) among many others are well within a short train journey (exploring any part of Europe by train and using the Eurail pass is without doubt the best way to get around) from Bologna. 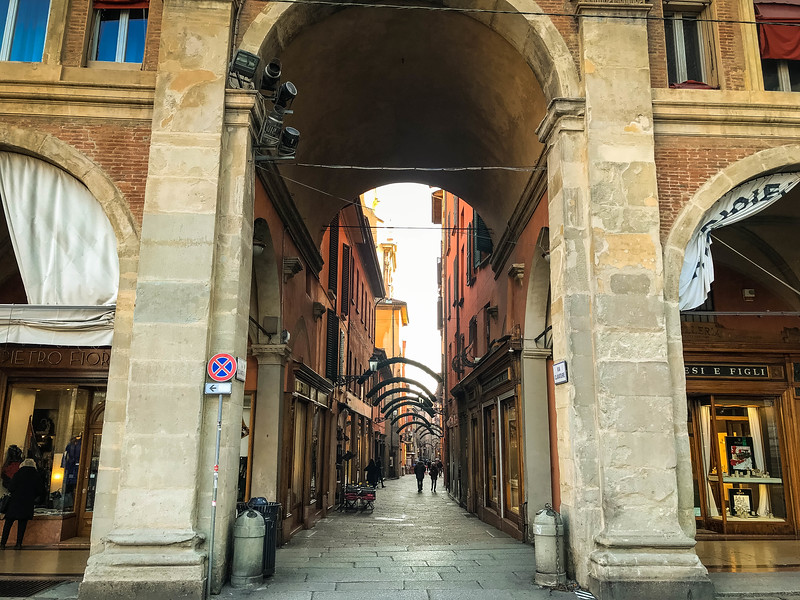 For those of you that have never visited Bologna but are planning an Italian getaway, we hope that you are convinced that this is a place you should consider adding to your itinerary – you won’t regret it!

Day Trips From Florence – Experience the Best of Italy

What the Historic Streets of Rome Really Look Like

5 Breathtaking Attractions in Milan Not to Be Missed