What is the first attraction you think about when you hear Paris? I would estimate that 99% of folks would likely say the Eiffel Tower simply because of its history and iconic position among the Paris skyline. Most visitors who visit Paris will want to see the tower for themselves and of course we were no different.

The first thing that we noticed on approaching the Eiffel Tower from the direction of the Champs-Elysees is the magnitude and size of the tower that I don’t think I had previously considered or realized. It literally ‘towers’ above everything else around Paris. Paris is not one of those western cities that have high-rise buildings and daunting skyscrapers such as modern US cities, but even so ‘La Tour Eiffel’ is an impressive structure both from a distance and certainly up close.

Before getting into details of our experience climbing to the summit of the tower, I would like to encourage folks visiting Paris to explore the Eiffel Tower and surrounding area both during the day and at night. You will face two very different experiences but both are extremely worthwhile and you will see a variety of aspects that you may miss if you don’t plan on both times of the day.

The Eiffel Tower at night

I will start with our night experience, which actually saw us venture to the summit. The first thing worth noting is that frequently the pre-booking of tickets for the Eiffel Tower online does not work. We tried several times but each time the site indicated that tickets were unavailable during the times we were visiting. Nevertheless, if you should see this, please don’t give up hope because with a little patience waiting in line at the kiosks outside the tower, you will gain access to a true iconic landmark. 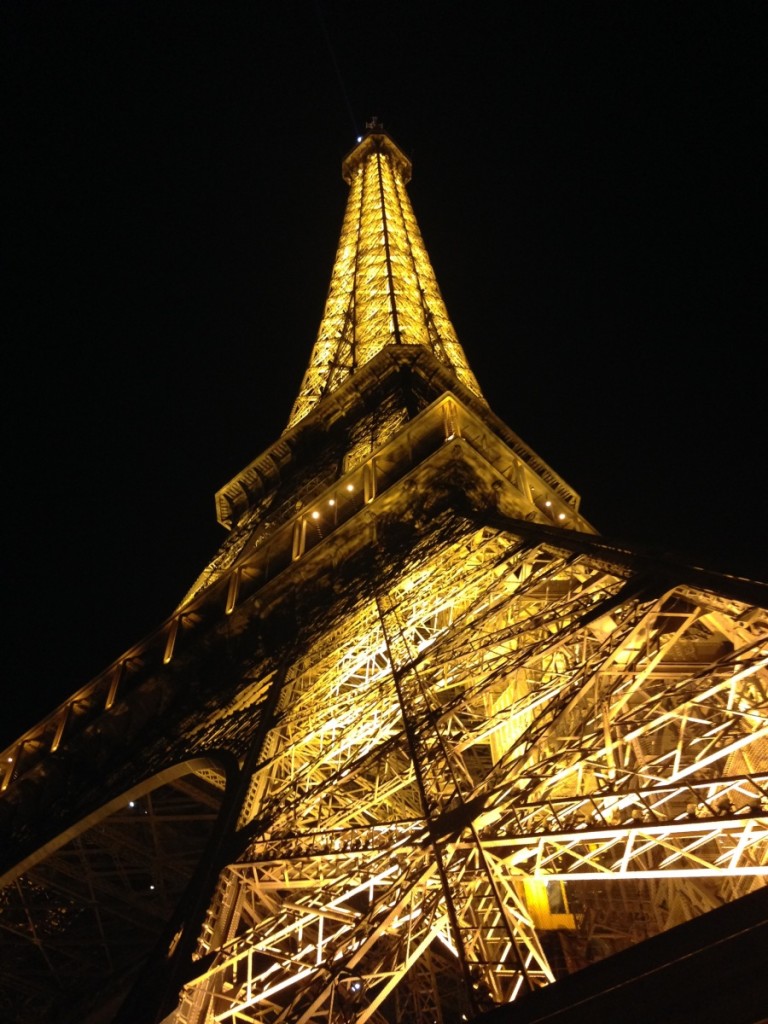 After passing through the security areas and paying for our tickets (14.50 Euros each to climb to the highest point of the tower though if you prefer to just go to the first level it is only 8 Euros), we entered the lift beginning our ascent to the summit. Waiting in line you notice the impressive design structure that is in place throughout the Eiffel Tower. From the actual design of the steel structures that make up the tower to the lifts that take tourists to the top, everything is engineered to perfection and a true credit to everyone concerned when designing this structure. 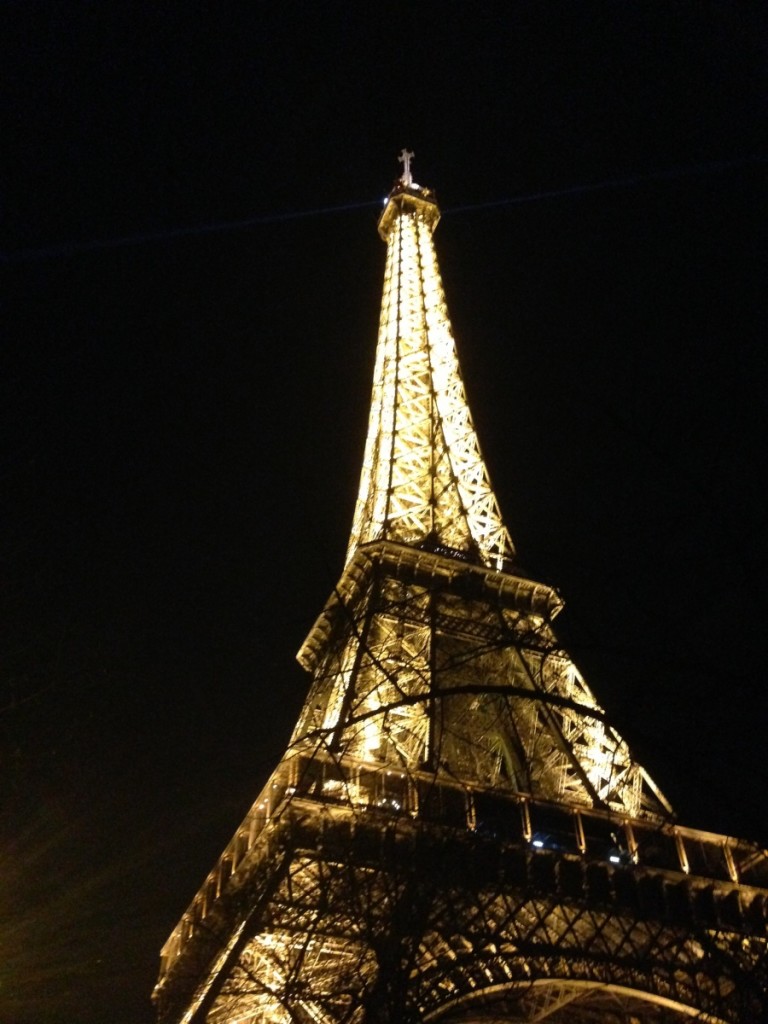 Reaching the first level everyone has to disembark the elevator and make way around to another line to take the second lift to the very summit of La Tour. On a cold, wintry December’s night at around 9:00PM, I would highly encourage you to take plenty of clothing because the wind chill gets pretty cold as you climb further towards the summit. Added to the fact you are likely to be waiting in line for substantial amounts of time, you should be well prepared before heading there.

Entering the second elevator, you are almost there! As the doors open you enter an interior part of the top level with glass windows providing the most spectacular views of the Parisian landscape at night. 360-degree views are breathtaking as you wander around and take memorable shots.

But the best part is still to come! You can climb another staircase, only about 15-20 steps and then after opening a door you are met with the true meaning of a cold, windy Paris night. Our breath was literally taken away from us and it’s honestly difficult to keep your stance as you walk out on to the top of the Eiffel Tower with only a wired barrier between yourself and the awe-inspiring views of Paris.

Taking pictures out here is near impossible on a night like we experienced because not only are your hands freezing, trying to keep steady as the wind is buffeting you from every direction makes capturing that perfect shot rather difficult. The experience however is worth all of this though because we certainly cherished the moments walking around the outside pointing out some of the other infamous Paris landmarks from the Eiffel Tower’s summit.

Even after climbing to the top and experiencing all of this, you still have to make the descent. After taking the mandatory elevator back to the first level, you then have the option of either waiting for the second one to take you back to ground level or alternatively take the winding steps which of course we opted for!!

Maximizing your experience is my opinion when deciding to take the stairs. I don’t think Heather was particularly fond of this option given her fear of heights and also with the searing spotlights shining up it was sometimes difficult to see the steps in front of you with difficulties in depth perception appearing.

We made it to the bottom though and can look back on our experience with great reward. The Eiffel Tower is a global landmark that you have to see for yourself and what a great way to overcome your fear of heights than to climb this magnificent structure and take in some of the most memorable views you will likely see in your life.

The Eiffel Tower during the day

During the day the Eiffel Tower is still incredibly spectacular up close. Even though we didn’t experience climbing to the summit during the day, we ventured around the perimeter and took some awesome pictures of the tower. 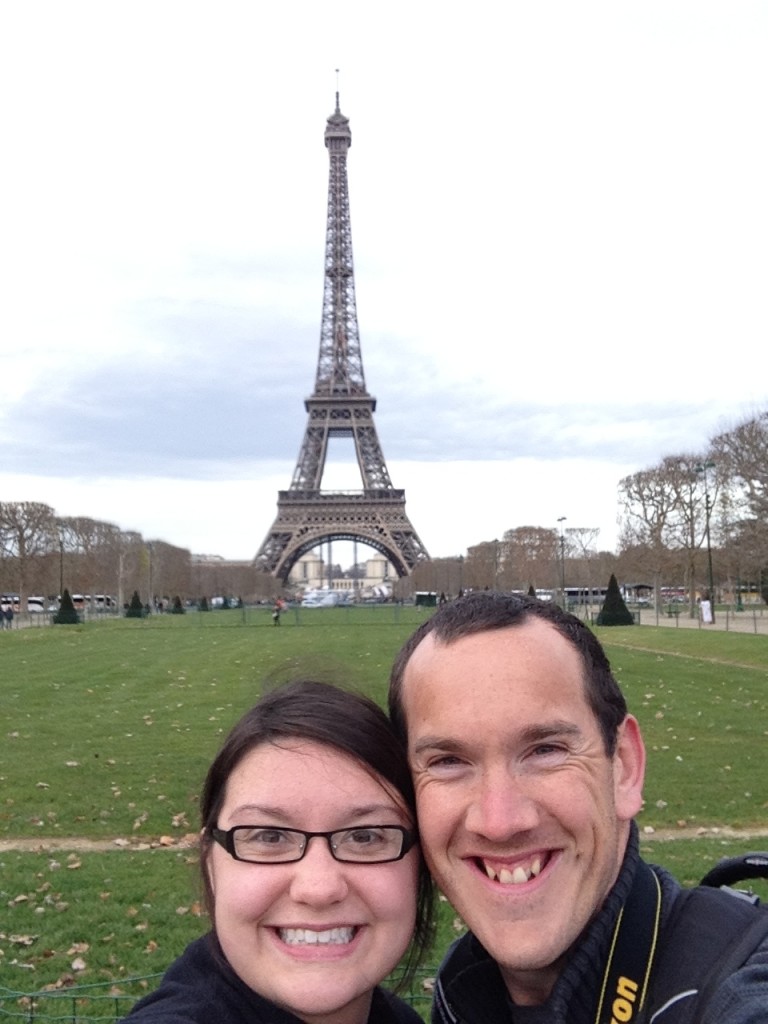 If you opt to climb the tower during the day or at night you will be in for a real treat. I am sure there are advantages to both, the romance of an evening stroll along the Champs-Elysees followed by climbing La Tour Eiffel was what did it for us though.

What are your experiences of the Eiffel Tower?

204 shares
Previous article
What makes Haworth such a beautiful place to visit?
Next article
Our 2013 Travel Review
Chris Boothmanhttps://abritandasoutherner.com
Chris Boothman is the co-founder of A Brit and A Southerner. Born near Manchester, England, Chris moved to USA in 2006 where he soon after met his wife and travel partner in crime, Heather. They have since embarked on an amazing journey of travel as they challenge others to follow in their paths of working full-time but also being able to travel frequently! If you have any questions or comments, please feel free to contact Chris at [email protected]

The festive season is all about experiencing awesome light displays around the world but have you ever contemplated...
Alabama

Planning a trip to any destination can be a daunting prospect with so many different resources available but...
Illinois

St. Louis to Indianapolis – How to Enjoy an Amazing Road Trip

The heart of the United States offers an abundance of attractions that frequently fall under the radar but...
Tennessee

Ready for a fun-filled weekend getaway in the Volunteer state? If you love the great outdoors mixed in...

The festive season is all about experiencing awesome light...

Planning a trip to any destination can be a...

Why Fall Is the Best Time for a Gulf Shores and Orange Beach Getaway?

Are you getting tired of the searing hot summer...